49 Students, One Adult Airlifted From Andros After Falling Ill On School Bus 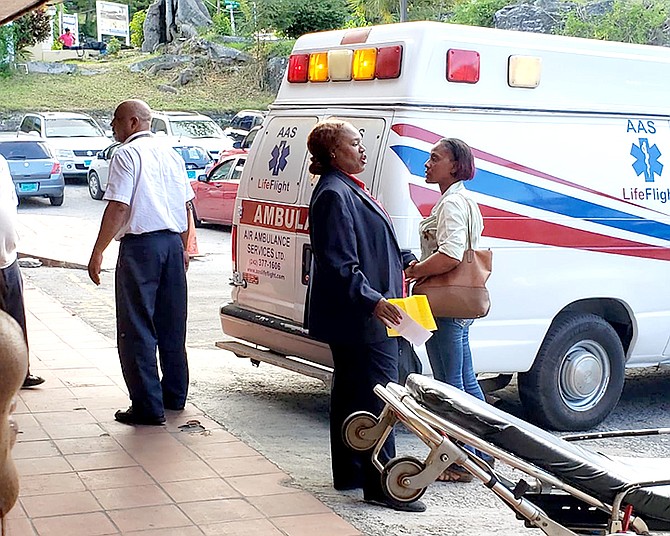 The scene outside Princess Margaret Hospital on Friday.

By LEANDRA ROLLE and YOURI KEMP

FORTY-NINE students and one adult were airlifted to New Providence Friday for medical treatment after showing symptoms consistent with carbon monoxide poisoning on a school bus in Andros.

The group containing children ages 10 to 17 were enroute to Central Andros High School from Cargill Creek when officials believe smoke from the exhaust entered into the cabin, causing the students to fall ill.

Initially police said the school bus was carrying 39 students and one adult, but the Public Hospital’s Authority later released a statement confirming there were 50 persons on board when the incident happened.

Some parents gathered at Princess Margaret Hospital, anxious about their children’s wellbeing.

“We’ve had several children going in and out of consciousness, confusion, chest pain, shortness of breath, dizziness. These are the typical symptoms of carbon monoxide poisoning,” Dr Sands said.

“Based on that clinical assessment, the treatment is to remove persons from the source of the carbon monoxide and then to treat them with oxygen….I am pleased to say that based on the interim reports that the children are getting better and none of them are deteriorating.”

Due to lack of resources on the island to treat the affected students, Dr Sands added that the children would be taken to Nassau to seek further medical attention.

During a press conference at Princess Margaret Hospital later Friday, Deputy Medical Chief of Staff Cordelia Nairn told reporters that 16 students had been received at the hospital at that point.

She said they were all conscious, alert and considered to be in stable condition.

According to Mrs Nairin, tests have already been started to confirm whether the children are suffering from carbon monoxide poisoning.

When asked how long affected students will have to be monitored at PMH, Mrs Nairin replied: “It will all be based on their clinical conditions if they continue to be symptomatic then those patients will have to remain in hospital at PMH for a longer duration.”

In an interview with The Tribune, one parent who did not want to be named, claimed she was frustrated because at that point she had not seen her daughter because she was in observation.

Sheree Neymour, another parent and mother of three of the students on the bus, said the situation could have been a lot worse, pointing to the “deplorable” conditions of the roads in Andros.

PHA later released a statement that read: “The first patients airlifted from Central Andros to New Providence in relation to this incident arrived at the Princess Margaret Hospital Emergency Department shortly after 2pm. As of 5.30pm Friday afternoon, the hospital had received 36 children and the bus driver.

“Six of the children are listed as stable and will remain in hospital for observation. All the others are scheduled to be discharged this evening. The hospital is prepared to receive the remaining 13 children as they are airlifted, over the course of the evening.”

In light of the incident Dr Nairn is also asking members of the public in need of urgent care to seek care at polyclinics in New Providence, including the South Beach Health Centre, Elizabeth Estates Clinic, Flamingo Gardens Clinic and Fleming Street Clinic. Persons in need of emergency medical care should call 919 or go to the PMH Emergency Department for treatment.

An official from the Ministry of Education was on scene trying to coordinate meals and accommodations for parents waiting in A&E to receive their children.

Oh boy! That sounds like carbon monoxide poisoning. Very scary. That can cause serious damage. I hope they all recover without any long-term issues.

This is what happens when contracts are awarded to friends, lovers and sweetheart. I grew up on the island and those are not checked or maintained. Hope all these kids are ok.

Bahamas, the land of no accountability. That same contractor with the same shitty bus, will keep his\her contract, without any loss of pay.

Exactly why the Bahamas will not get ahead! Whoever has the contract for busing those kids os resposible for the problem created by lack of maintanence.

Clearly an act of God. Nothing more to see. Business will go on as usual. Go back to your Whatsapp and Facebook.

Whomever is in charge must now ensure that those buses must have a carbon monoxide gas monitor installed at all times.

There were no mentioned of the bus driver or bus simply because the road condition in the southern part of central is in a deplorable condition with lots of deep pot holes .it doesn't matter how much you service or fix your vehicle something will eventually go wrong put wrong where it's due.