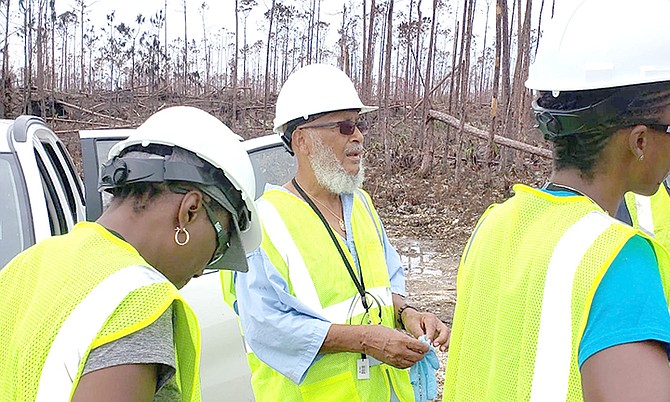 Human rights and environmental activist Joseph Darville and Rashema Ingraham of Save the Bays and Waterkeepers Bahamas tour Equinor spill site in East End on Tuesday.

EQUINOR officials in Grand Bahama yesterday confirmed that more than 35,000 barrels of crude oil have been recovered to date from its South Riding Point facility and efforts continue towards “full recovery” in East End.

It’s been a month since “the catastrophic” oil spill at the facility on September 2 during Hurricane Dorian. According to an official, 36,299 barrels have been recovered so far, which amounts to more than 1.4 million gallons of oil.

Additionally, officials have “categorically denied” accusations of unsafe and unfair treatment of Bahamians who are working, along with foreign responders, to clean up the spill.

Human rights and environmental activist Joseph Darville recently toured the facility and the affected pine forest area just north of the oil terminal, which had 1.8 million barrels of crude oil stored there prior to the storm. The terminal has a capacity of 6.75 million barrels.

While officials still not know how much oil was discharged in terms of volume from two of three storage tanks that were compromised, a company spokesperson assured the public that “our efforts continue for a full recovery.”

In a brief statement on Tuesday, the company indicated its commitment to complete the clean-up in a safe and environmentally friendly manner.

“Equinor has categorically denied any unfair and unsafe treatment related to Bahamian workers. We see the well-being of all of our team members as a priority.

“We are pleased to meet with Joe Darville and hope is now in a more informed position. While we are dismissing his claims regarding the workers, we value his concerns and productive input,” the statement said.

A company spokesman said Equinor officials met with Mr Darville and invited him to the facility for a comprehensive overview of the situation and what it is doing to clean up the spill.

“He accepted an invitation to tour the facility, and today (Tuesday) he toured the operation,” the spokesman said.

When contacted, Mr Darville told The Tribune that he was satisfied with how the company is dealing with the situation and the clean-up. Last week he released a statement alleging Bahamian workers did not have proper clean-up attire and equipment.

“In spite of this catastrophic event, we are very happy today that all instruments necessary and activity we see that the clean-up is being carried out in very diligent manner to our satisfaction. This is still a catastrophic event and there is no diminishing that, but the strategies and protocols are there to mitigate and return ecosystems to the extent where they are able to repair themselves over a period of time,” Mr Darville said.

According to Mr Darville, the Equinor team met with him and Rashema Ingraham, also of Save the Bays/ Waterkeeper Bahamas, last Friday at the Pelican Bay Resort and gave them an overview of what they were doing.

The slide show presentation via computer, he felt, was not adequate, and they requested a site visit.

“It was not sufficient at all, and we wanted to visit the site to see with our eyes what was being done, and to speak again with the experts at Polaris who are there as acting as the experts,” he explained.

The tour was set for Friday but was postponed due to bad weather to yesterday morning.

“We went and they gave a comprehensive overview of all aspects of the operation on site, and I asked questions about what sort of treatment was done,” Mr Darville said.

They were then taken on a tour with about eight to ten company officials of the forest area where the crude oil had been removed. Also accompanying them were environmental representatives here, as well as experts from Polaris, which had provided advice on the Exxon Valdez and the Gulf oil spills, and are now advising Equinor on best methods of dealing with the East End spill.

According to Mr Darville, many acres of the affected pine forest were being uprooted, but the government had ordered them to cease that activity.

“They were given orders by government to cease from uprooting pine trees saturated with oil. I gather the company and their advisor from aboard, Polaris, were told to leave pine trees there because it is a good possibility that they would survive,” he said.

Despite this, Mr Darville said the trees are showing signs of recovery.

“Today happily I noticed there were some new green needles at the top of the pine trees, and I commended them for not uprooting them because oil was on the trunks,” he said.

He believes that a lot of pine trees may continue to grow, but their main concern is its effect on wetlands in the area, particularly a huge area of 50 - 75 acres in middle of the pine forest.

Mr Darville said there are mangroves growing in those wetlands,  fish and other animals.

“Rashema Ingraham and I were happy they were showing due respect to the wetland which is very significant to the water table,” he said.

Concerning the spill, Mr Darville explained that initially the spill was being reported to be nothing of significance, not as extensive even though officials were aware of it.

He made a trip to the area and said it was obviously a catastrophic oil spill and was immediately concerned about the extent of it.

“We traversed the whole area about two miles north of Equinor and it went all the way and had penetrated the pine forest. When we went back to see if any commencement of clean-up had begun we were baffled there was none a week after the storm,” he said.

On their third trip to the area, Mr Darville had noticed that clean-up had started, but said he was shocked to see that Bahamian workers were not properly clothed or wearing breathing apparatus.

“I put out a very powerful statement as people were on ground from different entities, and I was really depressed that Bahamians were not properly clothed,” he explained.

After releasing his statement, Mr Darville said he was informed that workers were advised that they should not be on site unless they were properly clothed and with a breathing apparatus.

Mr Darville said prior to that workers were standing in oil and water up their knees with boots on but had nothing on their heads and faces.

you don't need breathing apparatus for an oil spill. Someone just lost all credibility here...!

You most certainly do....

Never mind Joe Darville. he has not been in the news lately. OBAN is coming The Fat one says it is a brilliant idea.

Does this mean that more than three birds and a goat may have been affected?

Despite this, Mr Darville said the trees are showing signs of recovery..."

WHAT KIND OF STUPIDITY IS THIS? We are in the business of worrying about trees instead of the water that our children are going to drink at school? Government schools are still closed supposedly because there is salt in the drinking water. What else is in the drinking water? OIL?

Why didn't the order come from Polaris? Would it be because they are only here getting a cheque and have no authority whatsoever over what happens with this oil spill?

Also why is it that Equinor doesn't know how much oil was in that tank? Is that how they run their operation on a daily basis? Ships pull up and get some oil from them and the Captain pumps 400,000 gallons into his ship and tells them he got 350,000 gallons and they say "OK Captain Sir, no problem. You can pay us for 350,000 gallons because we don't know how much was in the tank before you arrived here, so we will just take your word for it - just like the Bahamian people have to take our word for whatever the heck we tell them about anything."

Somewhere at a headquarters somewhere in the world, some big oil company is making plans to get a facility here so that they can have a free-for-all out of control circus that they can't have anywhere else in the world. They gonna "clean up" with that deal. (ooops, I shouldn't have said "clean up". They will do everything except clean up, I meant financially LOL).

Wonder if anyone realizes that this website can be read by anyone anywhere in the world? Nobody is worried that we look like complete and utter buffoons worldwide? Amazing.

Even before Dorian, major hurricanes in recent times such as Katrina and Rita have highlighted the vulnerability of above ground oil storage tanks to hurricane-induced loading caused by rapid significant declines in barometric pressure, high storm surge and sustained F-4+ tornado force winds. Statoil and its subsidiary, Equinor, would have been well aware of this fact and also the increasing frequency of major hurricanes in recent times due to changing climate patterns and global warming.

There is therefore a reasonable expectation for Equinor to have ensured that its storage tanks in eastern Grand Bahama were suitably designed and built (or later structurally reinforced) with load tolerances well in excess of those that would likely be induced by a category 5+ hurricane. But aerial photos taken of the storage facility immediately after Dorian show that the lids or tops of at least four of the storage tanks had been completely removed (blown away) thereby exposing the toxic oil contents to the surrounding environment, including possibly the sea. A thorough independent investigation is necessary to determine whether Statoil/Equinor could and should have taken reasonable precautionary measures that would have prevented the tanks from being so severely breached.

It is perhaps worth noting that the U.S. government imposed a fine on BP of $4,300 per barrel of oil spilled in the Gulf of Mexico as a result of the Deep Water Horizon incident. The total BP fine exceeded $18 billion.

Comrade poplulaces, be weary trust the eyes the connected to hip-bone organizations, funded by inside and outside foreign special interests groups, yes, no ...

The minister of one goat and three birds. how he ran on and on about the Rubis spill. Then his own chickens came home to roost. so he sings and appears as if he is missing from the looney farm.

He can not even drag Mr.: Fitzgerald's old shoes. The peoples time voters deserve him.

This is what terribly happens to colony out islands seas, waters and lands, when the comrade peasants trust the foreigner financed intelligentsia' be the protector custodians colony's environment, yes, no ...

Not great Not terrible

I thought everyone was going to say it was caused by Haitians....like everything else that no Bahamian will admit is their fault!!!!

No not everything is caused by Haitians, and as you know the real issue is not with Haitians, but illegal immigration and the burden they place on society. It is unlikely you would not call the police if you found someone entered your home illegally, but you want immigrants without landing documents to create shantytowns and overwhelm services taxpaying Bahamians underwrite, while people twist the law to create the appearance of 'loopholes' that falsely entitle them? No Bahamian has a problem with legal immigration and people abiding by the law! That's why you have heard no protests from Bahamians about those Filipino shantytowns!

Hitler had the Jews....Bahamians have the Haitians!!!

Is that old tired racism card the only one in your deck? Or is it that you only have half of a deck, if you know what I mean?