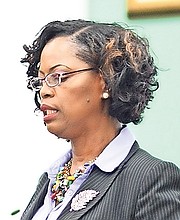 A FALSE affidavit from Fox Hill MP Shonel Ferguson's investment company was part of the reason why it was not given another chance to overturn its eviction from a building it never paid real property taxes on since assuming responsibility for it some 13 years ago.

Appellate Justices Jon Isaacs, Roy Jones and Milton Evans said it was "totally unacceptable" for Turtle Creek Investments (TCI) to have filed an affidavit expressing its compliance with an order from the registrar, when it was "fully aware" that was "not an accurate statement".

And although TCI's attorney apologised and said TCI did not intend to "deceive the court", the appellate judges said such "infractions" coupled with the "prejudice" the respondent, Daybreak Holdings, suffered as a result "fortified" their view that the appeal should be refused.

In any event, the appellate judges said they were not as "sanguine", or optimistic that TCI would have overturned Justice Keith Thompson's eviction order, as its claim to being the owner of the building "is not supported by the evidence".

The aforementioned was contained in a written ruling handed down on Wednesday, which outlined the appellate court's reasons for refusing to allow the reinstatement of TCI's appeal against Justice Thompson's November 13, 2018 judgement and eviction from the building in Centreville.

Last year, Justice Thompson ordered TCI, its agents, servants, assigns or subtenants to move out of the building in Centreville no later than close of business on December 15, 2018.

That ruling stems from a legal dispute over a near 13-year-old hire purchase agreement between the two sides for the building in question, which housed the Crab House and Seafood Emporium.

According to a sworn affidavit by Donna Davis, president of Daybreak Holdings, it was agreed that TCI would pay Daybreak a $150,000 deposit and thereafter the sum of $1,350,000 in monthly instalments of $10,833 per month over a period of 264 months.

In exchange, Ms Ferguson's company was permitted to assume responsibility and operation of the building in question. TCI was also responsible for all maintenance, taxes, fees, and insurance over the building.

According to court documents, TCI paid the $10,333 monthly sum for the most part until around December 2009, at which time there were some missed payments. TCI allegedly started making "reduced payments" in 2015, and by the end of September 2016, made no payments whatsoever.

Daybreak claimed it served "many letters" on TCI, all of which contained "numerous requests and demands" for all outstanding sums pursuant to the hire purchase agreement, but to no avail.

TCI was also ordered to pay all of Daybreak Holdings' costs associated with "the bringing of and prosecution" of the court matter, to be taxed if not agreed.

TCI subsequently petitioned the appellate court on the matter.

Thus, TCI tried to persuade the Court of Appeal to halt its eviction from the building before its appeal.

Ms Ferguson and her attorney, Randol Dorsett, argued that the "harm" would be caused if Daybreak Holdings followed through with plans to sell the building, while also claiming that Justice Thompson's ruling was "flawed".

However, Justice Jones, in a December 18 ruling, found that TCI fell "far short of what is required to provide the grounds to enable me to exercise my discretion in this matter". He further ruled that Ms Ferguson had given "contradictory reasons" to support her argument that TCI would suffer "irreparable harm" as she claimed.

Concerning the substantive appeal, pursuant to an order made by the Registrar, TCI filed a Record of Appeal on March 15, 2019 along with an affidavit of compliance filed on March 29, 2019.

According to the ruling, the record comprised some 38 items, however, seven of those items were "omitted" from the filing. Despite that, an affidavit sworn by Danielle McKenzie stated: "I hereby confirm that (TCI) has complied with the said order".

Daybreak Holdings, via its attorney Christina Galanos, subsequently wrote a letter to the Registrar of the Court of Appeal, applying for TCI's appeal to be dismissed due to its "failure" to include those seven documents in the record of appeal.

As to why the items were missing in the first place, Baycourt Chambers blamed the issue on the Court Report Office not providing the transcripts, and them consequently not receiving the transcripts in time. Baycourt Chambers further asserted that as the seven items were "not material" to the substantive appeal and given past instances where appeals proceeded in the absence of transcripts, the Record of Appeal was filed nonetheless.

However, the appellate judges noted that the affidavit of compliance "failed" to disclose the absence of the seven documents, thus making it "difficult" to understand the "basis on which the (person who swore the affidavit) could assert that (TCI) had complied with the order of the Court".

The appellate court further reprimanded TCI for taking the liberty of assuming that the missing documents were not necessary, as such a stance failed to "take into consideration that the Court had order that those documents be included in the record".

The appellate judges said if such was the view held by TCI, an application could have been made to dispense with them being included in the record. However, no such application was made, the judges said.

"We find it to be totally unacceptable that (TCI) would cause an affidavit to be filed asserting that the Registrar's order had been complied with when they were fully aware that that was not an accurate statement," the judges said.

"…We heard submissions from (Mr Dorsett) on the prospects of success however we were not satisfied that they were such as to cause us to overlook the infractions of (TCI). Parties are expected to comply with orders issued by Courts unless there are good reasons for them not being able to do so.

"We also gave consideration to the prejudice which Ms Galanos asserted faced her client in this matter which fortified us in our view that the application should be refused."