Face To Face: Standing Tall - And Always Together

The epitome of brotherly love is displayed between Dr Victor Horsley and his two elder brothers, Barton and Neil. His entire life, they held his hand when he crossed the street, they looked out for him in the playground and they made sure he did well at school. His brothers protected him and guided him. He was the baby brother. They have always been on a similar path.

“What I love most about them is that they always looked out for me,” said Victor.

“I appreciate that to this day. There is nothing that I have done that they didn’t have an eyeball on. They kept me in line and made sure I was doing the right thing. Mom always taught us to look out for each other.”

Lawrence and Albertha Horsley raised their three boys in west Philadelphia. The Horsley boys came from a rich family history which included being descendants of US President Thomas Jefferson and his slave, Sally Hemmings. Family was always important to their parents (now deceased). Their father was a city inspector and their mother a teacher. She would chide them if one brother bought something for themselves and not the others.

These life lessons stuck with them as they grew up, even though they took different career paths. Barton was in management at BUDD, a 20th century metal fabricating company. Neil had a Master’s degree in counselling and was working in Long Island, New York. Victor went to Howard University, an historically black university (HBCU) where he learned to appreciate his African American identity and his family history even more. From Howard, he was selected for a programme at Temple University and by completing that was able to immediately begin teaching.

“I was so happy,” Victor said. “I went on to study for my Master’s degree in teaching, and I borrowed a biochemistry book at a food co-op. The young man who loaned me the book was a podiatry student at a college in Philly. We were both vegans. We got to talking and he was like, ‘you should do this!’ He thought I should try out for the podiatry programme too.

“But I told myself that I can’t be a doctor. You tell yourself you can’t do something and you don’t. (Now that I have done it) I do motivational speeches and teach study techniques for kids. Howard University helped me a lot with that. You have to help kids get out of that ghetto frame of mind that they just don’t like school and teach them the great benefits of school.” 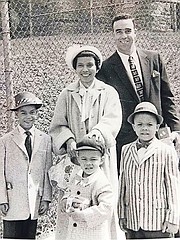 LAWRENCE and Albertha Horsley may not have known their three smart boys would all be podiatrists, but they taught them to stick together.

Victor ended up enrolling in Kent State Ohio College of Podiatric Medicine, where he graduated in 1982. There is a saying that ‘the first shall be last and the last shall be first’. Well in this case, Victor, the last of the Horsley brothers, took the lead and became the first podiatrist in the family. He found something he was passionate about and he couldn’t help but share it with his brothers, just as his mother taught him. So this time, his brothers were the ones following his lead. First Neil took his MCAT exam and passed, attended the same school and graduated in 1984. Barton followed suit and graduated in 1986. Today, even Victor’s nephew, Kairi Horsley is a podiatrist.

“Back then, there were only five schools of podiatry. When I was studying, I saw the need to cater to black people and their foot problems. There are now nine schools in the US and these schools are trying to save all (these people) from amputations.”

The statistics are staggering. In The Bahamas, about 1,000 people undergo some kind of amputation each year, according to Dr Daniel Johnson, podiatris. The doctors are working assiduously on “Fix My Feet” and “Show Me Your Feet” campaigns, with the aim of helping Bahamian diabetics avoid having to have limbs amputated.

Victor came from Belleville, Illinois where he served as a podiatrist in the public health service to help Bahamians. He has 38 years’ experience in the field and has worked in places such as Detroit, Michigan; east St Louis, Illinois; Denver, Colorado; Wisconsin and St Louis, Missouri.

On October 24 & 25, The Bahamas Podiatric Medical Association, Dr Johnson’s Foot & Ankle International, and the Academy of Minimally Invasive Surgery will present a conference entitled “New Hope for the Diabetic Foot”. About ten of the top podiatrists in the region will present on the subject, and health care professionals from a broad spectrum of the field will be in attendance to learn about the cutting edge technologies and procedures that are preventing amputations around the world. (For more information, call 1 (242) 322-5402 or visit DrVictorfai2.com).

“We will be focusing on minimally invasive surgery and how it will benefit limb salvage for the diabetic foot,” Victor explained.

“Instead of making your usual two-and-a-half or three inch incision, you make a one-eighth of an inch incision using special tools. We are able to perform bone osteotomies, or bone cuts, which relieves pressure off the foot and which are essential for limb salvage. These are ambulatory procedures, meaning the patient can walk out of the doctor’s office. We keep people walking and it keeps people feeling better.”

His brother Neil, who is the current Chair of the Department of Surgery and Biomechanics at Rosalind Franklyn University (where students are some of the highest achievers in the US in podiatry) will be one of the visiting doctors addressing the conference.

“There is a definite need for our service in The Bahamas to help with an increasing amputation rate,” Victor explained, noting that Diabetes in The Bahamas is now at epidemic proportions.

“Locals here have severe foot problems that you would never imagine. Amputations, sores pressure ulcers… Diabetics suffer from neuropathies where you don’t have the sensation component of your nerve. You could step on a tack and not know it as a diabetic. You could stub your toe on the dresser on the way to the bathroom at night and fracture your bone into several pieces and not know as a diabetic.

“When diabetics gain weight, the foot swells and pops the nerve endings. There are many ways to prevent amputation. Even if you don’t want to move and you want to be lazy, there are ways we still can avoid you having to have an amputation. This gives new hope.

“Danny (Johnson) found that people in The Bahamas were giving up. That is why he named the conference new hope for the diabetic foot and that is why he got us to come on board and help save them. Once you have an amputation, you are likely to have another amputation or die within five years. Amputations can cost up to $150,000 when you consider the surgery, loss of wages, loss of mobility, hospital and home care. Amputations are occurring from preventable injuries and curable wounds. They can do a 3mm skin biopsy which allows the lab to count the nerve endings in that tiny piece of skin. If the results are a nine or below, you are at a high risk of amputation. This helps us to determine where you are and give you the help you need. This new hope gives diabetics a new lease on life and then they choose to eat healthier and exercise and feel more excited about life.”

Victor specialises in HyProCure, which is considered a “proven solution to misaligned feet”. It is estimated that nearly 45 per cent of people have misaligned feet. Misaligned feet are quite common, but are often misdiagnosed because they cause a variety of seemingly unrelated symptoms including knee, hip and back pain. They affect people of all ages (visit hyprocure.com).

Events for the second annual conference to be held October 24 & 25 will have events at both Melia Resort and the University of the Bahamas media room. Presenting doctors in addition to Dr Johnson and the Horsley brothers include doctors Vietta Johnson, Borys Markewych, Monique Mitchell, Andronica Handie, Delton Farquharson and Sandra Zonicle-Newton. Doctors from Louisiana State University will be there to lend support and technical knowledge. Dr Stephen Dorsette was set to receive the lifetime achievement award in person at the conference, but sadly he died just a few weeks ago.

The New Hope for the Diabetic Foot conference will be followed by another on November 8 at UB, which will include Calvin Harris who did a documentary on the subject, podiatrists and a local vascular surgeon to bring awareness to diabetic limb salvage. These conferences are just ahead of World Diabetes Day on November 14.

Victor became a vegetarian when he was in medical school, after learning about up to 84 FDA approved chemicals that can be snuck into meat, including steroids, hormones and antibiotics. He became a vegan about 20 years later. Today, his elder brothers are also vegan. He is still a family man and is a proud father to his children Kai, Atiyya and Bashan and grandfather to six children.