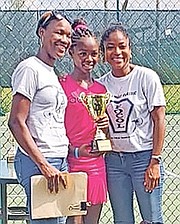 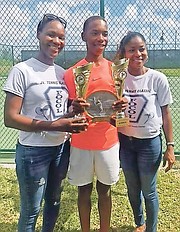 THE Bahamas Lawn Tennis Association congratulates all the winners of the 2019 Focol Junior National Tennis Classic held in Freeport, Grand Bahama, over the weekend.

“We wish to also recognise the only triple crown winner, Breann Ferguson,” the BLTA said in a press release. “Breann was recently invited by the International Tennis Federation to a training session in Puerto Rico for talented juniors.”

Ferguson was the winner of Girls’ 12U singles and Girls 14U Singles. She teamed up later with Jalisa Clarke to capture the Girls 14U doubles.

There was also a double crown winner in Michael Major Jr. He won the boys’ under-14 and boys’ under-16 singles.