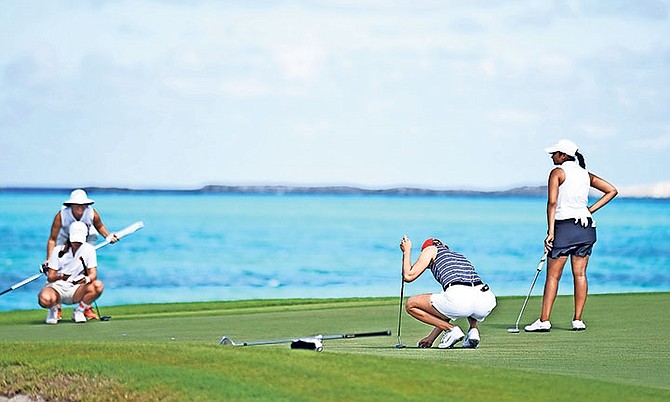 A RECORD-setting day for the Texas Longhorns as freshman sensation Sophie Guo led her team to the championship title on the final day of the White Sands Invitational.

Guo set a new individual record and the No.2 ranked Longhorns set a new team record en route to claiming both the individual and team titles yesterday at the Atlantis resort’s Ocean Club Golf Course.

Her score of 199 earned her the first individual win of her collegiate career and a new school record. She closed with a 66 after opening with rounds of 66 and 67. She bested the field by six strokes and finished -17. She also became the first golfer in school history to achieve a sub-200 score on a 54-hole total. Her score was also the fourth best 54-hole total relative to par in NCAA history.

Texas shot a school record -36 to win the event by 29 strokes and won the title with a score of 828.

The Longhorns placed four golfers in the top-six individually and all five in the lineup finished among the top-20 in their third team win this season.

Today will be a Pro-Am segment and the practice round for the 14 men’s teams entered. They are slated to begin competition Friday and wrap up on Sunday when their champions, team and individual will be crowned.

At the inaugural White Sands Invitational Pro -Am in The Bahamas last February, the playing field boasted 22 female professionals, most from the LPGA Tour. Amateur competitors were able to compete alongside talents like Lexi Thompson, Natalie Gulbis, Brittany Lincicome, Tania Tare and Sandra Gal.

The competition ended in a five-way tie between Megan Khang, Paula Reto, Brooke Pancake, Jillian Hollis and Alison Walshe, each carding an 8-under-par 64. The five players decided to share the $10,000 prize after a potential playoff was scuttled because of dangerous weather at the golf course.

Organisers of the event will provide a scholarship exemption into a professional tournament for both the male and female individual champions of the tournament.