'Crazy' To Stay In Low-Lying Areas In Grand Bahama 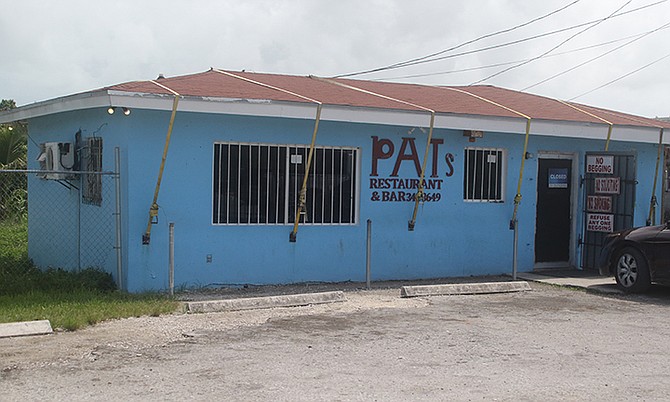 Precautions being taken in Grand Bahama ahead of Hurricane Dorian. Photo: Vandyke Hepburn

MANY residents in flood prone low-lying areas of Grand Bahama heeded the evacuation order to leave, especially those in East Grand Bahama, Queen's Cove in the north, and West Grand Bahama, which were expected to be affected by powerful storm surges from Hurricane Dorian.

Ahead of the storm's arrival yesterday, the city was in preparation mode - all businesses were closed, and traffic lights were deactivated at all the major intersections in Freeport.

Flooding and powerful gale force winds are expected to be a major threat to the island.

The Tribune visited the Queen's Cove Subdivision on Sunday morning where residents were completing preparations to their homes. Many of them evacuated because of the anticipated storm surge and flooding in that north-shore waterfront community.

Ray Darville, of Queen's Cove, said that it would be crazy for anyone to stay there or any low-lying area in Grand Bahama during Dorian.

"I have been on the sea my whole life and I have been looking at storms, and anybody that stays in QC or any low-lying area around Freeport is out of their minds.

"We are going to have a serious storm surge come through QC, and this isn't an (exaggeration). I don't run from storms, I been in two hurricanes at sea, please get out."

Mr Darville predicted that Dorian would leave his home and others in Queen's Cove under five or six feet of water. He cleared out his entire home of all furnishings and appliances in anticipation.

When asked how he felt about another major storm hitting Grand Bahama, which had been devastated three years ago by Hurricane Matthew, he said: "We all live in paradise so we have to pay our price too. Lots of people live in some terrible places in the world; we living the best place in the world. We just have to pay once or twice a year for the blessings we got."

In anticipation of the flooding, Queen's Cove resident Kendal Davis put his furniture and other appliances on pallets inside his home.

"We are (in the) last stages of lifting everything. As a matter of fact it's all used pallets and 2x6 and 2x8 and make a scaffolding and everything is raised above that. Right now, we are getting (ready) to move out...and just wait it out until the storm passes."

"The thing is, we only get flooding if there is a surge from the north side because the south side is lower than the north side so once the water comes in it flows over. I have been doing this now for 20 years, the first one was Floyd 20 years ago. But such is life, you just keep on going," he said.

Further down, we ran into Wayne Burrows, who is an elderly wheelchair bound resident of Queen's Cove. He was being assisted by family members with preparing his home.

"I am getting out in a couple minutes," he said. "Whoever stays in Queen's Cove anywhere by the water got to be crazy with this kind of storm that is coming our way. We got to just pray for the best."

Even though her home is two-story, Chrisanne Astin said it is just too dangerous to stay in Queen's Cove.

"I will be leaving; we know that the water is going to be high here, so it is just too dangerous to stay; even though I have a two-story I still would not stay. We been through every hurricane pretty much and we know what to expect, and it is not a happy thing, but we got to take the blows as it come," she said.

Patsy Roberts has also cleared her house of all furnishings, however, a few family photos were still hanging on the walls.

"I am not staying here, I am finishing off clearing out my house," she said. Ms Roberts said her home had flooded in past storms.

Willard Hanna said Grand Bahama is in for a very hard blow.

"This is just terrible. I don't know what is going to happen to Grand Bahama after this has gone through," he said.

In East Grand Bahama, some six persons had left Sweeting's Cay on Sunday morning. According to the island administrator there, Gaye Bowe, some 125 residents live on the cay. She reported that 33 were still on the island by 9am on Sunday.

Evacuation orders have all been issued for residents in the Pinder's Point area, the southwest part of the island, as well as West End.

Deputy Prime Minister Peter Turnquest said there is a heightened "sense of concern" for his constituency of East Grand Bahama after watching the devastation that Dorian has delivered to Abaco.

"As we watch the total devastation that is currently happening in Abaco, our sense of concern is heightened for the residents that have made the unwise decision to stay in Sweeting's Cay, East Grand Bahama and other vulnerable areas of East Grand Bahama," he said.

"At this time, these areas will shortly begin to feel the effects that will rapidly escalate. As it is too late to move now, ask you all to be safe as possible, sheltered in the strongest home in the area, stay together and be sure to check on one another," Mr Turnquest said yesterday afternoon.