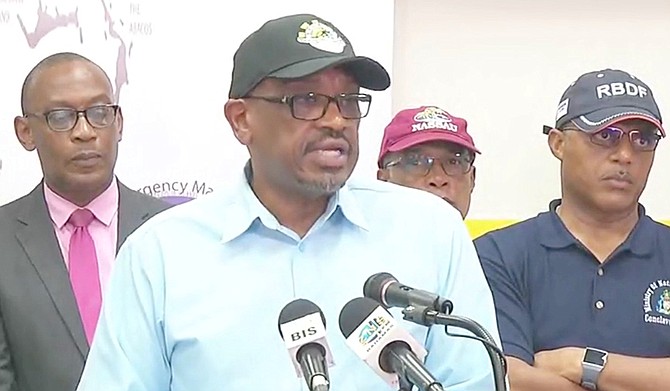 TWENTY people have been confirmed dead as a result of Hurricane Dorian’s fury, according to Prime Minister Dr Hubert Minnis last night.

While government braces for this death toll to grow, Dr Minnis further warned looters and law-breakers of prosecution to the fullest extent of the law.

He said to reinforce safety and security in Abaco and Grand Bahama, additional Royal Bahamas Police Force officers and marines had already been deployed to those islands. They will have the support of 150 Jamaican Defence Force officers.

The reports of looting, according to National Security Minister Marvin Dames – some isolated and others localised – have taken away from the overall recovery and rescue efforts as every reported incident has to be physically looked at by authorities.

A view of the destruction from Hurricane Dorian in Marsh Harbour on Wednesday. (Al Diaz/Miami Herald via AP)

Meanwhile, according to Health Minister Dr Duane Sands, there have been 17 deaths confirmed from Abaco and three related to Grand Bahama. He said officials were fully capable and able of handling an increasing death toll, adding some of the victims had already been identified while others had not. The identities, he told The Tribune, were being withheld as a matter of sensitivity to relatives.

Speaking of his plans for both islands, Dr Minnis said his administration planned to rebuild them stronger and more resilient.

He said one of the ways people from around the world could assist the country in rebuilding was to visit unaffected islands by plane or boat.

John Michel Clarke has been appointed as chair of the Disaster Relief and Reconstruction Committee, the Killarney MP announced.

Nicole Campbell, permanent secretary in the Office of the Prime Minister, will serve as co-chair. Their handling of funding will be reviewed by a reputable accounting firm that will provide oversight to ensure that funds are properly spent. There also will be regular reports to ensure accountability.

“Fellow Bahamians and residents, this is not the time for partisan politics or divisiveness,” Dr Minnis said moments after completing a flight over Grand Bahama. He said while many homes there had been completely submerged by flooding, the island did well infrastructurally.

“The Bahamian spirit is resilient and unbreakable. We will meet this awesome challenge with the same mindset that led us to build this chain of islands over generations. Hard work, focus, tenacity, love and compassion are what we are about.

“We will persevere because we are a people of hope. There is something each one of us can do to help. Let us all give of our best in this moment of historic tragedy.”

On its current track, Dorian has the potential to affect parts of the US southeastern coast and the Canadian Maritime Provinces.

He continued: “I advise Bahamians in those areas to pay attention to local advisories, and to take every necessary precaution to be safe. Even in our hour of need let us pray for those citizens and residents of Canada and the United States of America still in the path of Hurricane Dorian.

“Let me advise the international press and potential visitors that New Providence, Paradise Island and the other islands of the Bahamas are open to receiving tourists and guests,” he said.

“One of the best ways that people from around the world can show their support and solidarity with the Bahamas at this time, is to visit our other islands by air or by cruise ship.

“One prominent visitor who visited the Bahamas with his wife in February, and who loved his visit here, pledged to return again in February for a visit. To keep our economy strong in order to help with recovery and reconstruction, we will need to keep our booming tourism economy vibrant.

“We must keep our economy strong and resilient in order to help in the rescue and recovery of those in need. Most of us have relatives on Grand Bahama and Abaco. They will have to rely on us, especially those of us on New Providence, to rebuild their lives.

“New Providence must be the bedrock and the command centre to rebuild Grand Bahama and Abaco. We will rebuild better and stronger,” the prime minister added.

Dr Minnis further urged Bahamians to pray for first responders and those seeking relatives, adding both he and his wife Patricia continued to pray as well.

“We will rebuild better and stronger” the prime minister added.

How is this possible with the same Town Planning and building code regulators who watched “the Mudd” flourish for the last 50 years.

You can’t expect a different outcome with the same inputs.

This is a wonderful opportunity to rebuild Abaco, get rid of the shanty towns, clear out illegals, upgrade the building code and improve town planning. I pray that our leaders would have the wisdom and tenacity to do this right.

It's also an ideal opportunity for corruption of the highest order with borrowed funds and very heavily padded government contracts granted to the muck-a-muck select few 'chosen ones'.

A reporter asked PM Minnis whether and how his government was going about determining an estimate of the possible number of Dorian related deaths, especially in Central and North Abaco. A visibly agitated Minnis tersely responded by saying government officials would only know the number of dead by seeing and touching the bodies found that appeared to be lifeless. Someone needs to remind Minnis that it's highly unlikely the many bodies of those poor souls who were swept out to sea by the withdrawal of the storm surge will ever be seen or touched by anyone. The viciousness of the raging storm surge, both flowing in and flowing out, was exacerbated by the intense low pressure, king tidal effects and tornado-like winds that changed direction as the eye wall passed over for a second time. I found it disappointing that Minnis could not say whether a systematic house-by-house (building-by-building) search was being conducted, along with the interviewing of survivors and persons housed in official shelters, in an effort to come up with a reasonable estimate of the possible number of deaths. Structures once searched should be clearly marked to indicate they have been searched to avoid duplication of effort by rescuers.

And what about cadaver dogs trained to assist in the finding of bodies? The foreign agencies lending assistance to our government are truly surprised at the apparent lack of preparedness and the amount of learning-on-the-fly that is having to be done. Prayers and the reading of scripture should never be a substitute for the quick rollout of a well-designed search, relief and recovery effort that takes full account of most contingencies and obstacles likely to be encountered in worst case scenarios.