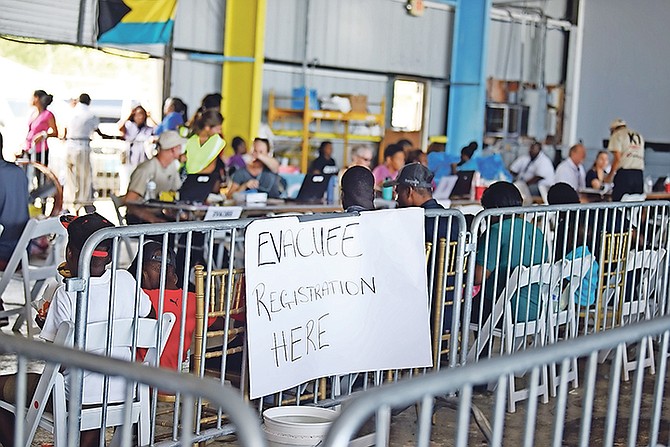 MORE than 1,600 people are in emergency shelters in New Providence, according to the National Emergency Management Agency, as Hurricane Dorian’s decimation forced 4,800 people to be evacuated to the capital.

Earlier Monday officials said there are six shelters in Nassau with a total capacity of 1,676. However last night, NEMA said in the aftermath of Dorian, 1,676 people have had to utilise shelters in New Providence. NEMA did not make clear if additional shelter space was brought online to address the need.

Up to press time, officials said at the Kendal Isaacs Gym proper, 1,224 people are being sheltered. Two tents set up there are housing 194 people.

In the Salvation Army, which can hold 40 people, so far 30 people have gone there.

Pilgrim Baptist Temple can house 100 people, but up to this point only 95 evacuees are there, while Grants Town Seventh Day Adventist Church is housing 29 people. It has a capacity of 40.

The immediate needs of evacuees have largely been tended to by groups of private citizens in a coordinated effort to provide relief.

The Tribune visited a large-scale relief operation at Odyssey Aviation yesterday. Stocked in its hangar were a large variety of items like generators, gasoline containers, flashlights, food, beverages and clothing.

Medical professionals were also on hand to attend to the needs of the sick.

Odyssey President Steven Kelly said around 2,000 people had been processed through his facility. Given the magnitude of these efforts, he urged people to give their time and whatever else they could to assist evacuees.

He said: “All of this facility you see here is owned and operated by Odyssey Aviation. All of the folks you see in here are volunteers from the local community from the civic organisations like Rotary, Kiwanis - HeadKnowles is a big charity group that has been providing a lot of the food stuff and stuff you see.

“All of this has been coming from all over the world. There is stuff from Canada, stuff from America and local stuff that’s being donated. It’s just a community effort plain and simple,” he said.

The hangar also has a “comfort station”.

“They come off of the plane. They are immediately provided with water or Gatorade or some sort of nutrition. There are sandwiches and other stuff that are manned all day long,” Mr Kelly said.

“Then they are processed through the evacuee arrival desk if they have passports or identification we are scanning all of that in for social services. So we will have a huge database that social services will use.”

Personnel also separate evacuees based on whether they have relatives in New Providence and whether they need shelter and/or transportation.

Hundreds of volunteers are manning the centre.

Good luck with that!!

For decades now many of the Caribbean nations south of us have been trying to boost there own economies by making it as easy as possible for many of their indigent citizens to illegally enter the Bahamas with the hope of finding work and sending money back home to their families. The invasion of the Bahamas by illegal aliens from other Caribbean nations has been exacerbated by greedy powerful criminal elements involved in highly profitable human trafficking enterprises. These very same criminal enterprises are also engaged in the smuggling of arms and drugs. Sadly, we have been betrayed as a nation by Bahamians who are duplicitous in these illegal activities for their own very greedy self-gain, including no doubt some of our past and present senior government officials. The rumours over the years about corruption within our immigration department, registry of births and passport office are well known within the Bahamian community.

Successive PLP and FNM governments have done nothing to protect Bahamians from the ongoing invasion of the Bahamas by illegal aliens, too many of whom are involved in the criminal enterprises I mentioned above or are members of violent gangs that have been wreaking havoc on our society. Survivors in the aftermath of Hurricane Dorian would have been granted generous visa waivers and many forms of other assistance by the U.S. government and the State of Florida were it not for the fact that Bahamians have allowed their successive PLP and FNM governments to turn a blind eye to the protection of our country's borders with no real enforcement of our immigration laws. This has been the case for so many years now that the Bahamas has effectively become a satellite state of Haiti in the eyes of the U.S. government, and rightfully so.

For the first time ever yesterday, a President of the U.S. announced to the world that the U.S. is unwilling to waive any of its strict documentation requirements for getting into and staying temporarily in the U.S. for Hurricane Dorian survivors from Abaco and Grand Bahama because of the national security risks associated with our illegal alien problems. This position has of course now received the support of the Governor of the State of Florida and Florida's two Republican Senators. Bahamians must not allow the Minnis-led FNM government and other political officials to try spin this position of the U.S. government into anti-American sentiment or racism. We Bahamians allowed our successive PLP and FNM governments to do nothing about our illegal alien problems and the U.S. government has every right, in fact the mandate from the American people, to protect their homeland.

All of the talk over the years by our successive PLP and FNM governments about the U.S. being responsible for the criminal elements within our very large community of illegal aliens and being the main market place (creating the demand) for their contraband has been nothing but a convenient excuse for doing nothing of any great consequence to prevent the ongoing invasion of our country.