The destruction caused by Hurricane Dorian is seen from the air, in Marsh Harbour, Abaco in September, 2019. (AP Photo/Gonzalo Gaudenzi)

Thursday UPDATE: At Thursday’s press conference, NEMA said the number of missing people was now at 1,300.

SOME 2,500 people have been registered as missing after Hurricane Dorian ravaged Abaco and Grand Bahama, though the official list has not been cross-checked against records of evacuees and people staying at shelters.

National Emergency Management Agency (NEMA) spokesman Carl Smith said at a press conference yesterday that the government will look to reunite survivors with their loved ones after cross-referencing its datasets. Many people left the storm-struck areas by private planes and boats in the days after Dorian struck and some did not notify the government of their departure from the islands.

More than 4,000 people have evacuated to the United States, according to the New York Times, and more than 5,500 people have evacuated to New Providence, according to the government. NEMA is encouraging people who evacuated Abaco and Grand Bahama to register with the Department of Social Services, which is managing the government’s missing persons register, so its lists can be accurately categorised. 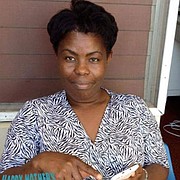 Donnette Henlon, 46, last spoke with her sister, Claudine Byfield Etienne, 54, on the morning of September 1. Yesterday she described a hectic, confusing process of getting information from the government about missing people.

“I was in contact with NEMA from Monday when I gave them the information,” she said. “Each time I called I had to give the information over and over, my name, her name, my phone number and where she was living, etc. Every day it’s the same thing, the same process.

“My cousin and I went to the hospital on Sunday but the nurses’ station said I’m supposed to contact NEMA. I went to the registration area, the registration area said go to nurses’ station so I said it doesn’t make sense going back to the nurse station because they told us go back to NEMA. I went to NEMA personally and was told they don’t have a list, social services is the one that’s supposed to have a list. We went to social services and they said we don’t have a list, go to NEMA. I’m like, this is ridiculous.”

Ms Henlon visited Odyssey Aviation on Sunday afternoon but her sister was not listed as having come over on any of the flights. She has visited local shelters but presumes her sister would have called relatives by now if she was at any of them.

“None of us - her kids, sisters, brothers, nephews, niece, cousins - feel she is dead,” she said. “Actually, we just think she is somewhere unable to communicate, maybe disoriented. We don’t feel that sense of loss and we’re still hoping that she’s somewhere.”

A website not affiliated with the government, dorianpeoplesearch.com, has been set up to list missing people. So far, hundreds of names have been registered with the website, which is being regularly updated to note if the status of people has become known.

Ms Henlon’s sister lived in Dundas Town, one of the most populated settlements on Abaco and one whose residents largely remained in their homes during the storm, believing they could withstand Dorian’s force.

She said she has spoken to acquaintances of Mrs Etienne and has heard diverging stories about what happened to her sister.

Two people, she said, told her that her sister was seen at the government complex in Marsh Harbour with a friend after the hurricane. Another person told her Mrs Etienne was seen going to a church on the edge of Pigeon Peas shanty town and died when the building collapsed.

“That does not make sense because the closest church to her was a Zion Baptist Church and that’s still standing,” she said.

Someone told her she had a conversation with Mrs Etienne during the storm in which her sister indicated the water in her house was waist high.

“That doesn’t make sense because why would she stay in a house in which water keeps rising?” Ms Henlon asked.

There are likely many more who have not been reported missing and will not be found than there those on the missing persons list who will eventually be found and scratched off the list.

Why hasn't official post Hurricane Dorian website been setup with the pictures the many comrade Missing Persons?" - yes, no ....Some the missing persons may not even be aware they're believed be missing?