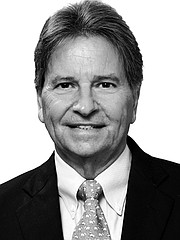 A leading Bahamian realtor yesterday pledged to “put Humpty Dumpty back together again” after Hurricane Dorian wiped out up to 30 percent of his business.

George Damianos, pictured, president and managing broker of Damianos Sotheby’s International Realty, told Tribune Business that the category five storm had totally destroyed four of the firm’s five Abaco offices when it rampaged across the island.

Revealing that the one surviving location was now acting as a command post for recovery efforts in Hope Town, Mr Damianos said Dorian’s arrival could not have been more ill-timed for his Abaco agents.

With summer the “big season” for Abaco real estate deals, he predicted that many sales would still have been “under contract” and yet to close prior to the devastating storm’s arrival. As a result, Mr Damianos said few - if any - transactions were likely to close apart from those involving vacant land as many of the subject properties would be write-offs.

However, he emphasised that neither himself nor the company had “given up on Abaco” despite the extent of the devastation and likelihood that recovery will take years to fully complete. The Damianos Sotheby’s chief voiced optimism that Eleuthera, which was spared Dorian’s wrath, will “pick up the slack” for international buyers seeking an Out Island experience.

“We’ve not given up on Abaco,” Mr Damianos affirmed to Tribune Business, disclosing that he first entered the island’s real estate market in the wake of Hurricane Floyd two decades ago.

“It was a part of our business that was anywhere from 25 percent to 30 percent of the operation. We’ll go back in as soon as possible, regroup and put Humpty Dumpty back together again. I’ve assured my employees that’s my intention.”

He described Abaco as “a big loss, a big loss” to the overall Bahamian real estate industry given its importance as a vacation rental and second home destination that attracted wealthy investors to communities such as Hope Town and Treasure Cay, as well as projects such as Baker’s Bay Golf & Ocean Club and the Abaco Club at Winding Bay.

This made the real estate industry itself one of the key pillars for Abaco’s economy as it generates multiple employment spin-offs for the likes of attorneys, realtors, landscapers, contractors, maintenance personnel and property managers.

“There’s a real cottage industry affected by this. Golf cart rentals in communities, caretakers that took care of these homes, rental companies that rented these properties. It’s big. I also worked to sell Deep Water Cay [in east Grand Bahama], which I understand was pretty much wiped out. They employed 62 people. Where do they go?”

He continued: “Abaco is emptying out. A lot of people are out. I think it will take a while before Abaco comes back, and any meaningful market in real estate and real estate transactions.

“Marsh Harbour is pretty much a hub, and it was wiped out. Baker’s Bay, Man O’ War Cay and Elbow Cay, a lot of this stuff was fed out of Marsh Harbour. It has been a big blow to Marsh Harbour. I will probably go up in a few weeks to see what can be salvaged in Marsh Harbour.”

Mr Damianos said the real estate firm’s five Abaco offices had all been destroyed “with the exception of Hope Town”. He added: “Believe it or not, we’ve got the generator running, got it all cleaned up and, to the best of my knowledge, we’re in the process of having it become a command centre for the clean-up of Hope Town.”

Its other locations fared less well, with the buildings housing Damianos Sotheby’s offices on Treasure Cay and Guana Cay totally demolished, and its second Hope Town base also “gone”. The Marsh Harbour office was described as having “doors and windows wide open to the public”.

Mr Damianos said all the realtor’s Abaco staff had been evacuated to either Florida or New Providence subsequent to the storm’s passage, although the fee and commission income expected from sales on the island prior to Dorian is unlikely to materialise.

“Properties under contract will more than likely not close apart from vacant land,” he told Tribune Business. “We had quite a few under contract. The big season for agents up there is the summer. If under sale in July, August on a house, it is probably not going to close, so you’re not going to get the fees and commissions. It goes on and on. We’ll just have to regroup.”

Besides New Providence and Abaco, Mr Damianos said Eleuthera represented Damianos Sotheby’s other significant source of business. “Eleuthera was virtually unscathed and is up and running,” he added. “We anticipate it will take up some of the slack with Abaco. For people looking for the experience of being in The Bahamas on an Out Island, Eleuthera will pick that up.”

Mr Damianos said the company’s Abaco administrative staff had begun work in Nassau yesterday. He added that four of their children had been accepted at the Windsor Academy in Old Fort Bay, and his firm was now seeking to rent apartments for them.

Dorian had produced some “heroes” within the realtor’s operations, Mr Damianos said, with employees such as Ashley Brown finding rental accommodation for storm victims in Nassau and Bianca Aranha organising evacuations and supplies from Spanish Wells.

“It’s an amazing story, and I’m so proud of my staff here because so many of them have stepped up and become leaders in the rescue effort with Abaco,” he told Tribune Business. “It’s really been a massive effort. It’s amazing to me the amount of foreigners that have called me wanting to help The Bahamas.”

Even vacant land under contract may not close due to Hurricane Dorian being an act of force majeure that has rendered the impacted land unsuitable for the purpose intended or warranted.