Power Back In Southern Abaco In Three Weeks 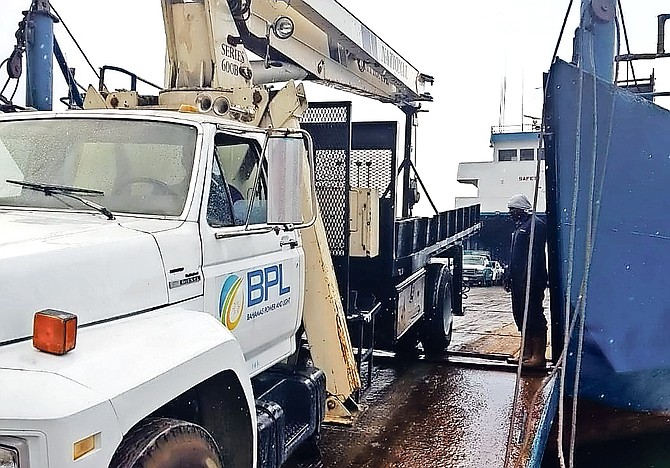 BAHAMAS Power and Light is anticipating electricity will be restored to the southern part of Abaco in three weeks, however it could be months before the rest of the island is reenergised.

He said the assessment for the northern part of the island and its 15 cays has not yet been completed, and therefore it is "difficult to pinpoint" a timeline for that area.

Water & Sewerage Corporation Deputy General Manager Robert Deal said WSC has completed its assessment and is finalising an action plan to restore water supplies to the island. Mr Deal added there are eight systems across Abaco and the largest are "completely down". He also said WSC has a "21-day" plan for Marsh Harbour.

Regarding Grand Bahama, he noted the water system on that island is managed by the Grand Bahama Utility Company (GBUC) but added WSC is working with this corporation in its efforts.

In this statement, BPL said there are no standing electricity poles along the 16-mile stretch of road from Marsh Harbour to Treasure Cay.

"There is better news in the south," the statement added. "From our Wilson City Power Station to the main road, there (are) two lines, one of which is in good condition. Less than 100 poles are needed between Sandy Point and Wilson City, which can be replaced within weeks."

When asked yesterday about a timeframe for restoration on the island, Mr Moss said, "For the south of Abaco…once our teams get on the ground and there's no weather impacts…we're anticipating for the south, we can have the south restored in about three weeks.

"The northern part of the island as well as the 15 cays that are affected, we've not completed assessment on those cays and so it's difficult at this point in time to pinpoint the complete time for the restoration. You anticipate that with that, you can be a few months."

When asked whether the influx of survivors of Hurricane Dorian to New Providence has impacted load shedding on the island, Mr Moss replied, "We do not foresee any major impacts.

"We do not anticipate that the shelters themselves, with extra persons coming on the island, will pose a problem for utility," he added.

Regarding the WSC assessment, Mr Deal said, "With respect to Abaco, the corporation has completed extensive assessments. Just yesterday (Tuesday) we had an assessment team there checking the water quality in the Marsh Harbour area, focusing on our well fields and some distribution sites. And so we are finalising an action plan to restore water supplies throughout Abaco.

"Right now we have eight systems spread across Abaco. Of those eight we have intermittent supply or limited supply at five of them. Three of our systems are completely down and those are the largest systems. Particularly with respect to Treasure Cay and Marsh Harbour, those are completely down.

He added challenges also exist on the cays, particularly on Grand Cay, Moore's Island, and Sweeting's Cay - which is on the eastern end of Grand Bahama but managed from the Abaco operations.

Regarding Grand Bahama, Mr Deal noted WSC has been in "close contact" with the GBUC, noting the two operations met last Saturday.

"They are well on the way to bringing about some level of restoration. But similar to Abaco, most areas are without power supply. And therefore that means that we are deepening on generator supply at this time."

When asked if any biohazards contaminated the water supply, Mr Deal said on Tuesday, a WSC team in Marsh Harbour collected "extensive samples" throughout its well fields - checking both for salinities, to determine whether there was any seawater intrusion, and also for the presence of hydrocarbons.

The samples are at the WSC lab and will also be sent to international labs. "Based on those results, we'll have a better idea of what is present," Mr Deal said.