DIANE PHILLIPS: What happens when the story’s off the front page?

At the Fox Hill Community Centre, volunteers try to keep 56 children occupied. It isn’t easy. The shelter is at full capacity with 250 souls. It is one of the better ones, newly built, air-conditioned but still it is rough. People aren’t supposed to live like this, herded like cattle, sleeping in rooms with hundreds of strangers, sharing toilets with those they have never met, wearing the same clothes day after day.

Every one of them knows that no matter how tough it is now, they are the lucky ones. They are alive. Some of them lost loved ones and many are still in shock. Fox Hill MP Shonel Ferguson is trying to bring as much dignity to the setting as possible. She is appealing for a washing machine and dryer so sheets and towels can be laundered. She needs a microwave. The children need crayons and colouring books, the older ones need black and white writing books for school.

Chances are good that she will collect those supplies now. Everyone is in a frame of mind to give. The outpouring of love for the people of The Bahamas is so extraordinary it almost defies explanation.

A former Miami-Dade high-ranking official said in a strange way, he envied The Bahamas.

“If this had happened to us in Miami, do you think people from around the world would have come to our aid and rushed in to help? No way. People all over the world know The Bahamas and love the Bahamian people,” he said.

All true. But what happens when the headlines fade? What becomes of the calls for food and water, clothing and especially housing when another story begins to creep in on Page One space? As a friend said, the impact of and the recovery from Dorian is not a sprint. This is a marathon and we are in it for the long haul.

The wisest among us will begin training for that marathon. If evacuees are to remain in shelters, each one must be equipped with laundry and proper bathroom facilities.

They must have cooking facilities or arrangements with those who provide meals on a consistent basis.

Whether it is the Bahamas Feeding Network or Hands for Hunger or one of the churches, there must be a consistency because when the headlines fade and the other volunteers and those who are responding to immediate needs retreat back into their everyday lives, the people living on cots will still be there waiting for a better tomorrow.

Their stomachs won’t stop begging for nutrition, their children won’t stop needing attention, their desire to connect with others in a social context won’t vanish.

Perhaps it is time to revive what turned out to be one of former Prime Minister’s Hubert Ingraham’s last attempts to pull volunteers together just before the 2012 election. Hundreds of us piled into a room, ready to lend service.

The PLP won that May election and the idea got swept away as fast as the old guard moved out of the offices they had occupied. There was no crisis then, no Dorian to respond to and yet hundreds did. What about now? A rallying call for a non-political pool of volunteers to continue the work as the headlines fade and a running nation in still in lap one of a very long marathon. 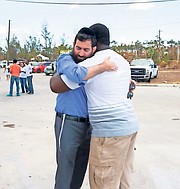 Through one man’s eyes

Like many churches and organisations like HeadKnowles and Rotary, who have all done amazing work, the Jewish community has drawn supporters from as far away as Israel to assist. Provisions for 10,000 meals a day, setting up of 10 child-friendly spaces equipped with counsellors, palettes of water and personal items, especially for children and women, have all been arranged, but the rabbi’s description of what he saw and how it touched him bears repeating.

These words from Rabbi Sholom Bluming:

This week I met devastation. I came face to face with it, and seeing it with my own eyes has left a lasting impact on me. Allow me to share.

I spent the last few days in Freeport. I was met with what was once a beautiful island, filled with sprawling buildings, colourful homes and vibrant life. All of that is now gone.

I met people aimlessly wandering up and down the streets with no direction of where to go, people searching through the ruins of their homes to find a remnant of what was once there. I met a young girl and gave her a teddy bear, hoping it would bring a small measure of comfort. She held it tight and started to cry and said, “Mom, this reminds me of the doll I left on my bed before our house fell down!”.

I met an elderly woman sitting on a stoop in front of a dilapidated and broken home, and upon seeing the case of water and food items we had for her, she told me, “I haven’t had a drop of water in 24 hours!”

I walked into a shelter that usually holds up to 100 people, but this day there were over 200. It was hot and sticky inside and I wondered if sleep was even possible in such a room. There is barely any electricity or running water on the island and the shelters are no exception.

I met with people who have lost everything to the hurricane; their homes and everything inside it, and many who unfortunately lost family or friends. The amount of damage, despair and lack of basic necessities is heartbreaking.

I cried. I cried to see good people suffer so much. I found myself hugging them, and when I tried to let go, they held on. They needed the hug, they needed love, and they needed to know that people care.

Together with a group of volunteers, we went around to visit people in the various affected areas. Our team gave out thousands of meals, water bottles and hygiene items.

We will be there for the people of Freeport in the long run. We are committed to helping them rebuild their city. We are in touch with building companies in Miami that will come down to repair damaged homes and broken roofs so they can begin their lives anew.

My friends, every person in the world is connected to one another, and when tragedy hits someone, it affects us too. We must be with them in their difficult times…

Wherever you are, open your hearts for the people of Freeport and Abaco and let us pray that God gives them the strength, comfort and healing needed.”

Comrade "Sister" Diane, thanks telling a story without wearing blinders .... and yes, soon the story Hurricane Dorian and the colony of Out Islands will have disappeared off the front pages, then what, yes, no ....

Then we fend for ourselves. We cannot expect other nations to prop us up indefinitely.

But that's precisely what the enormous illegal Haitian community now in New Providence is expecting Bahamians to do, i.e. prop them up indefinitely. They should be repatriated back to Haiti where they can fend for themselves with their own fellow Haitian nationals who have not illegally entered another country.

Fox Hill MP Shonel Ferguson is trying to bring as much dignity to the setting as possible. She is appealing for a washing machine and dryer so sheets and towels can be laundered.

Ms. Ferguson might wish to find out if her fellow FNM MP who owns a chain of laundromats can help out. The same goes for those government officials overseeing or assisting with the needs of the other shelters around New Providence.