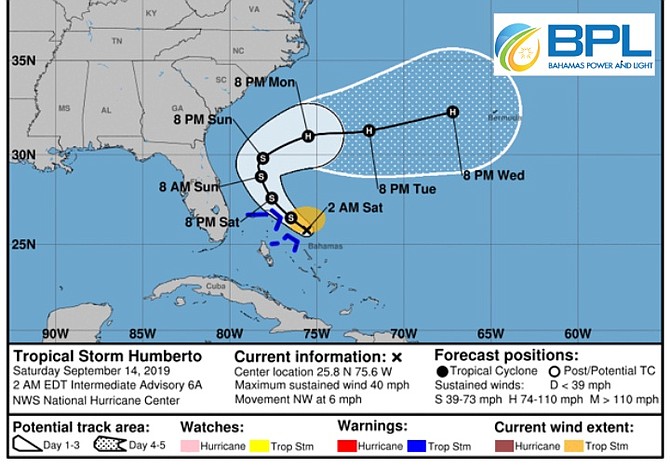 2.40am UPDATE: Here is the latest tracking map (main picture) for what is now Tropical Storm Humberto. The National Hurricane Center has posted this: “Humberto will likely bring tropical-storm-force winds and heavy rainfall to portions of the northwestern Bahamas on Saturday. Significant storm surge is not expected in the northwest Bahamas from this system. Residents there should follow any advice given by local officials.”

7.20pm UPDATE: Prime Minister Dr. Hubert Minnis spoke by phone with His Royal Highness Prince Charles today from his office at Cabinet, Churchill Building. Prince Charles expressed how deeply the people of the United Kingdom are feeling for Bahamians during this time of tragedy in the aftermath of Hurricane Dorian. His Royal Highness and the Prime Minister also spoke about ways to rebuild storm-affected communities better and with resilience and long-term reconstruction. "This call means so much to the Bahamian people. It shows the deep friendship between our two nations and that we are like family. The Royal Navy was here at the start and was able to bring in food and supplies almost immediately. Thank you for your strong support," said Prime Minister Minnis during the call.

5.30pm UPDATE: From the Ministry of Foreign Affairs: “The general public is advised that the Government of the Bahamas has authorised a fee waiver for the replacement of E-Regular passports for persons from Grand Bahama and its Cays and Abaco islands and its Cays whose passports were damaged, destroyed or lost during the passage of Hurricane Dorian. Persons from the affected islands wishing to replace their E-Regular passport can do so by visiting the Passport Office in New Providence. Of note, effort is being made to restore service at the Passport Office in Grand Bahama in the shortest time possible.

“First time applicants will have to produce relevant documentation in order to procure an E-Regular passport. The regular processing fees remain in place for persons applying for new passports and the renewal of manual (handwritten) passports.”

12.35pm UPDATE: From today’s NEMA press conference – A tropical storm warning remains in effect for the northwest Bahamas – including Eleuthera, Andros, New Providence, Abaco, Grand Bahama, Bimini and the Berry Islands – for a storm which has the potential to become a tropical cyclone. Winds are expected to be minimum tropical storm force – from 39-60mph. There will be pockets of heavy rainfall that could produce more flooding.

• NEMA is taking the necessary precautions for this new weather system. In Grand Bahama those with compromised roofs or damaged buildings should make preparations to move to the designated shelter – the Church of the Ascension – they should do that by the early afternoon hours.

• Provisions are being made for those in official shelters in the impacted areas – monitoring and assessment are ongoing. There are 71 people currently in shelters in Grand Bahama who are being supported by the government and three people in a shelter at Central Abaco School. 2,037 remain in shelters in New Providence.

• There has been no change to the total on the missing persons register – the number still stands at 1,300. The government is working with NGO partners to locate missing persons and inform family members as quickly as possible.

• The government is moving towards resuming regular aircraft operations. The Bahamas Aviation Authority is advising that the temporary flight restrictions are still in effect for Grand Bahama and Abaco. From today, limited traffic is allowed at Grand Bahama airport – this is only available for aircraft operations with a local air operators certificate. In Marsh Harbour a temporary air control tower is being established.

• Progress is being made in relief and reconstruction: Teams on the ground in Abaco and Grand Bahama have been working hard to establish telecommunications and improve the reliability of communications on those islands. As this improves, more detailed updates will be able to be provided. In Grand Bahama, operations are being coordinated centrally from Freeport. Thousands of meals are being provided each day by partners. Abaco is logistically more challenging. Abaco is also being provided food by multiple organisations. Fuel and water are the biggest needs there.

• Registration of students displaced by Hurricane Dorian is being scheduled in advance. Those not in shelters should contact the Ministry of Education for an appointment time. The registration process will continue until mid-October.

10.15am UPDATE: * BPL TROPICAL STORM ALERT GRAND BAHAMA * Bahamas“First Alert” Weather is advising residents currently residing in Grand Bahama - with particular reference to East Grand Bahama - that a potential Tropical Storm will most likely pass over the eastern end of Grand Bahama over the next 24 hours bringing gusty winds [30-45 MPH] rough seas, heavy rains and t-storms resulting in possible flooding on low lying areas as the ground is saturated.

Those with compromised roofs or damaged buildings please DO NOT take any chances – you should make preparations to move to the designated shelter - which we believe is the Church of Ascension.

PRIME Minister Dr Hubert Minnis expressed disappointment and surprise yesterday in his predecessors, Hubert Ingraham and Perry Christie, over their comments suggesting he has ignored their capacity to help the country recover from Hurricane Dorian. In a statement, Dr Minnis called their comments misleading and referred to them as an “unnecessary distraction” – full story HERE

A Cabinet minister last night predicted it will cost “billions and billions” to rebuild Abaco and east Grand Bahama’s infrastructure after the “awesome challenge” laid down by Hurricane Dorian. Desmond Bannister, minister of works, told Tribune Business that “the figures are huge” although he declined to provide details ahead of further Cabinet discussions on reconstruction efforts in the category five storm’s aftermath - full story HERE

When it rains it pours and it's certainly pouring all over the Minnis-led FNM government these days.

he needs someone to lift a bucket,can you help?

Many of us have been doing the heavier lifting for nearly two weeks now notwithstanding all of the government's controlling red tape and confusion.

ain't mudda already explain that he's housing a family? that's more than 90% of Bahamians will be able to do.

Hey, Tal ... what exactly is your official spoken or written language? ‘Cause it sure ain’t English. 😎

Tal's official language is likely creole which would explain why he refuses to elaborate on who he considers to be, in his own words, "our own drowned by Hurricane Dorian's flood waters".