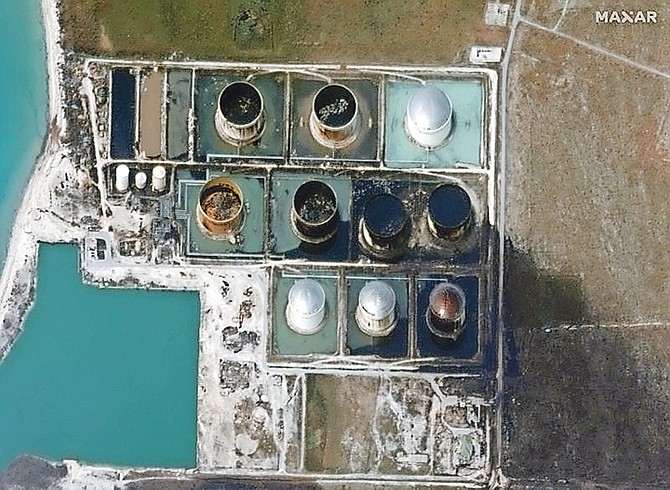 THE oil on the land around the Equinor facility after Hurricane Dorian.

EQUINOR, formerly Statoil, operates the old Burmah Oil storage facility at South Riding Point in East Grand Bahama. Equinor is a Norwegian multinational energy company majority owned by the Norwegian government. It is a petroleum and wind energy company operating in 36 countries. By revenue, Forbes ranked it as the world’s 11th largest oil and gas company and the 26th largest company, regardless of industry, by profit in the world with annual revenues of $60bn and 20,000 employees.

Dorian hit Grand Bahama after devastating Abaco on August 31. The Equinor above-ground storage tank (AST) facility was hit and six tank roofs were blown off (how?), resulting in an oil spill which mercifully blew north onto land and not south into the sea. It is still a disaster, but dramatically less than it could have been. The prevailing current on the south shore of GB is from the south-east to the west. If it had blown into the sea, it would have drifted to Carnival’s Grand Port beach, Peterson’s Cay National Park, Barbary Beach, Royal Caribbean’s Lucayan Beach, into the many miles of Freeport’s canals, along the rest of Freeport’s beaches, into Freeport Harbour and eventually West End. Freeport’s desirability would have evaporated and would be known as “Freepoil”!

The media has shared photos of the environmental damage. Equinor has pledged and mobilised to clean up the oil spill. Thankfully, Equinor has the resources and, given its ownership, a vested interest in maintaining its reputation as an environmentally responsible corporate citizen of the world.

Oban obtained approval to develop a $5.5bn oil storage and refinery facility east of Equinor’s. Despite the fact that Oban has no history in the industry and has mired the government in political embarrassment, Cabinet continues to promote it as an opportunity to resurrect GB’s economy, and seeks to further justify it on the basis that GB residents are “overwhelmingly” in support.

Tragically, it seems Dorian killed dozens of people in GB, particularly from east GB. It has displaced thousands and destroyed their homes. GB can rise Phoenix-like from Dorian’s ashes. It has dodged an oil disaster that could have crippled its environment and future. Luckily, Equinor has the means and will to remediate the spill.

But what if Equinor didn’t? What if the oil had spread south-west? What if Oban had built a refinery? What if crude oil and refined product was now on our beaches, in our canals, in our water table, in all our reefs and in the harbour? Mind you, Freeport already has much of this challenge on a smaller scale with Borco at Freeport Harbour. Just imagine it exponentially bigger for the entire southern coastline of GB, 30 times larger than the 10 million gallons of crude that oozed over Prince William Sound from the Exxon Valdez in 1989. That was 1 tanker. Equinor has 10 ATSs. Oban would have at least 20. And what could we do about this? What can we do about the Equinor land oil spill?

We have no Environmental Protection Act. The government is reported to have stated that after it takes care of the immediate needs of the people it will turn its attention to the oil spill clean-up. However, that is not the job of government. That is the job of Equinor. The government’s job is to have in place laws and a regulatory agency which can effectively prevent an Oban-type development and not to license an unknown Johnny-cum-lately like Oban; to ensure that existing facilities like Borco and Equinor operate as safely as possible; to oversee regular maintenance and prevent pollution, and at industry’s expense (not the Bahamian taxpayer) oversee emergency reaction to spills and damage from accidents to the highest industry standards, given that we are a tourist-based economy in Hurricane Alley!

Irresponsibly, neither the PLP nor the FNM governments have taken protection of the environment and the safety and health of workers seriously. The highfalutin-sounding Cabinet “National Economic Council” (NEC) and committees negotiating Heads of Agreements (HOA) make a big song and dance about protecting the environment. They are well-meaning but ineffective. It’s all dissonant talk which ultimately frustrates investors from abroad.

Because of our pristine environment, The Bahamas is desirable to investors for private islands, golf courses, mega-yacht marinas, second home projects, hotels, casinos, water parks and condominiums. Freeport is the industrial capital of the The Bahamas. In addition to the above, Freeport is home to oil storage facilities such as Equinor and Borco, ship repair facilities, a container port, chemical plants and aggregate mining. In addition to foreign investors, domestic Bahamian development is also taking place. These projects have tremendous environmental, social, cultural and planning impacts. Yet both political parties muddle along amateurishly and irresponsibly. The irony is that both foreign and domestic investors appreciate and would comply and cooperate within well run organised statutory regulatory frameworks. A well run green economy is within our grasp!

Yet, The Bahamas still has not passed an Environmental Protection Act. It has no environmental protection agency with any statutory teeth. It relies on the Bahamas Environmental Science and Technology (BEST) Commission that does not exist in law and is also under-funded and resourced. The NEC serially negotiates HOAs with each new foreign investor with wonderful provisions dealing with the environment.

Firstly, it is a perverse waste of time for HOAs to be negotiated afresh, each time instead of simply having an Investment Act with a framework and efficient negotiation of business terms by a statutory Bahamas Investment Authority (which still does not exist). Secondly, once signed, there is no government department that oversees the enforcement of provisions of HOAs. Thirdly, domestic investors are not even subject to the NEC or HOAs. They are all non-statutory policy constructs.

They are, however, subject to the Planning and Subdivision Act (PSA), the Environmental Health and Safety Act and other building control and development legislation. These laws are well-meaning and well drafted and also apply to foreign investors after the HOAs are signed. However, these statutory agencies are often ignored by the executive branch of government. They are underfunded and under-resourced. The PSA is supposed to be the cornerstone of development in The Bahamas. Yet no National or Island Use Plans have been created as required by the PSA.

As to Freeport, sadly even though it is the Industrial Capital of The Bahamas operating under the Hawksbill Creek Agreements (HCA), the Grand Bahama Port Authority (GBPA) and the Grand Bahama Development Co. (DEVCO) have negligently failed to provide development, environment, health and safety Bye-Laws as required by the HCA and the Freeport Act 1993. Instead, all governments have continued to undermine the HCA and bicker with the GBPA, instead of holding the GBPA and DEVCO to account for their responsibilities under the HCA and cooperating with them in passing the Freeport Environmental Bylaws.

So, we are left with a dog’s breakfast of conflicting jurisdictions, disrespect and failure to abide by laws passed by Parliament, strangulation by policy and statutory red tape, and ultimately frustration of both foreign and domestic investors. All to the detriment of The Bahamas and opportunities for developing a green and environmentally sustainable economy, where both domestic and foreign investors would comply with the laws if they were properly set out and administered by properly funded and resourced statutory agencies. Instead we have constant political interference and obsession with minutiae by the executive to the ultimate frustration of everybody concerned.

It is in this environment that we find ourselves dealing with the disaster of an oil spill on land with absolutely no effective laws to force Equinor to do right by The Bahamas. We must simply put our hands together in prayer and hope for the best. We can only beg King Harald V of Norway and his PM Erna Solberg to please clean the oil spill quickly and effectively.

Given this negligent and ineffective political, statutory and policing environment, we ask, how on earth, could any rational politician continue to promote the Oban oil and refinery?

Despite our lack of laws, I have faith that King Harald will do right by The Bahamas. As to Oban, it would just walk away. GB would be left to clean up Oban’s mess at the expense of the Bahamian taxpayer.

Oban obtained approval to develop a $5.5bn oil storage and refinery facility east of Equinor’s. Despite the fact that Oban has no history in the industry and has mired the government in political embarrassment, Cabinet continues to promote it as an opportunity to resurrect GB’s economy, and seeks to further justify it on the basis that GB residents are “overwhelmingly” in support.

Our most arrogant and nasty PM seems to have much too big a personal horse in the Oban race to do what's right by the Bahamian people, especially Grand Bahamians. Minnis will never ban Oban, even after Hurricane Dorian has fully exposed the totally unacceptable environmental risks posed by Oban's proposed oil storage and refinery facility. All Bahamians need to start asking themselves: Why is Minnis behaving as if he personally has a great financial stake in the Oban project proceeding no matter what the known risks are for The Bahamas, especially Grand Bahamians?

I prefer to argue with Mr. Smith but unfortunately now he is on to something. Our laws should be in place for instances like this. Equinor should have already had a clean up crew here and we should be receiving status updates. I would have expected to hear by now just how many gallons of oil was spilled and how many gallons have already been retrieved in the clean up effort. There should be fines in place for every day after an all clear is given that the clean up has not begun. I think $1million a day after 3 days is a good starting point? Maybe $5million a day??? We should only be dealing with companies organized enough to shrug at these amounts because they know that they can have clean up crews in place within 24 hours of a spill. We should also have bonds in place for big companies like this so that we have funds in hand to start a clean up if they choose not to. After all property developers here in Nassau have to put up like a $1million bond which the government holds until the development is completed. Why don't we do the same with these big industries?

I have driven by the sites several times in the last 3 days. They are only cleaning up their side of the road. The other side has large pools of oil that are not being touched. They also only had a few workers on site. They tried to stop me from videoing the site so i posted the video on my GoFundMe site, Save Pelican Point. Hopefully this will be a lesson when considering OBAN.

http://tribune242.com/users/photos/20...">http://thetribune.media.clients.ellin..." alt="They are only cleaning one side of the street and have very few workers.">

http://thetribune.media.clients.ellin...">They are only cleaning one side of the street and have very few workers. by PelicanPointSam