Insight: In Our Darkest Hour, Caring Hearts Are Most Needed 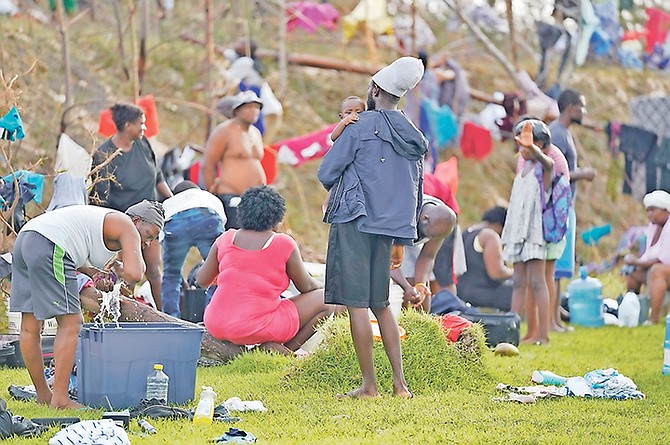 JUST over two weeks ago, the islands and cays of Abaco and Grand Bahama were devastated by the ruthless winds and rain of Category 5 Hurricane Dorian. Left in its trail of destruction, the stench of death and loss still permeates the air of two jewels in the crown of The Bahamas – completely altering the picturesque landscape of the treasured Bahama islands.

Homes pancaked throughout the close-knit communities where families once enjoyed tranquil beauty away from the hustle and bustle of New Providence have left us all with mild to acute forms of post-traumatic stress disorder.

Indeed, it has been nothing short of the most horrific experience in Bahamian history. Even for those of us on islands that were mildly affected and others that weren’t, if you had communication with Abaconians and Grand Bahamians that endured the storm, you felt like you were watching a real-time horror movie. This nightmarish ordeal has been unsettling in more ways than one.

Certainly, our vulnerability in this new era of superstorms has been brought to the forefront. The impact of climate change on the intensity of storms has made it so that even a tropical depression now sends chills down the spine.

Justifiably, the Bahamian people are frightened, as it is clear that the stakes have changed, and it is now a matter of life and death to be taken seriously.

Naturally, one would assume that grief and loss bring people closer. However, while this has been the story in some instances, Hurricane Dorian has unfortunately sprinkled salt in bitter wounds as tension between Haitians and Bahamians has again reared its ugly head.

Putting it mildly, the vile manner in which some Bahamians have responded to the Haitian community in this time of crisis has been disappointing. Notwithstanding the long unresolved issues with illegal migration, there is little sympathy for the Haitian community who have also lost everything along with our countrymen in the mounds of rubble left behind by the storm.

Hurricane Dorian was an equal opportunity disaster that ravaged the impacted islands. Whatever your nationalistic views, that calls for a measure of empathy for other human beings.

Of course, sympathy does not equate to a free pass, but Bahamians have to become more open-minded and kind-hearted in the wake of such an historic tragedy.

However, at a time when those of us in the nation’s capital should be focused on providing support in any way we can, many are spewing hateful rhetoric towards the Haitian community all over social media which embarrasses us all.

It is absolutely despicable.

If there had ever been a time when our humanity should prevail, rather than bigoted nationalism, it is right at this very moment when our brothers and sisters – Haitian and Bahamian – are most in need. Unfortunately, though, many Bahamians don’t share these ideals. Amidst a life-shattering event, people are asking for Haitians to be sent “home”. But to which home are we sending them?

Some of the residents of The Mudd and Pigeon Peas have lived there for generations unencumbered in what one Washington Post journalist dubs a “libertarian utopia” where the rules did not apply.

Rather than unleash our disgust and hatred of Haitian people, why not really put on our critical thinking caps and take issue with the policies, or lack thereof, that have allowed this vexing issue to proliferate for such a long time. Surely you would agree that our collective energies should be directed toward a goal-focused end. And whether we’d like to admit it or not, this road does not circumvent the people of the demolished communities of The Mudd and Pigeon Peas becoming regularised be it through temporary status or otherwise.

The fact is that the government is faced with an unpopular, but no less, necessary decision that it has to make.

While the government has taken the position to suspend deportation exercises of immigrants from areas impacted by Hurricane Dorian, there is currently no plan to offer asylum to non-Bahamian storm survivors.

Minister of Immigration Elsworth Johnson, when speaking to the media last week, said: “Having regard that we’re now facing a humanitarian crisis, the government is taking the decision that those immigration policies or enforcement measures suspended forthwith in the affected areas – that’s the Abacos and Freeport, Grand Bahama.

He added: “Why I say we were extremely careful because the notice sent out does not include islands like Inagua, Cat Island and San Salvador, Long Island, whatever have you. We still have the constitutional right to safeguard our borders.”

Indeed, this was a commendable policy shift. But let us not be naive in our thinking that’s where it ends. No doubt the government is embroiled in its recovery and restoration efforts on both affected islands. Nevertheless, a hard policy stance will be necessary to bring clarity to one of the more convoluted issues plaguing Bahamian society.

Here it is, we’ve seen what can happen when these issues are not mitigated, which they should have been eons ago. To Prime Minister Minnis’ credit, he attempted to take a firm approach to immigration and the removal of shantytowns but was met with legal roadblocks that hindered this process – a process which potentially could have saved countless lives.

Obviously, with the rebuilding process taking place and the symbiotic relationship of the rich and poor in Abaco communities, the government is going to be faced with some very tough decisions.

Where is the manpower coming from to drive these rebuilding efforts if the government decides to deport the surviving residents of these communities? Surely, there were able-bodied unemployed men (and women) on the capital, but will they be as motivated as the Haitians to rebuild their “home”?

While there is a full cheering squad in support of the government deporting Haitians that were in Abaco illegally, how heartless will that make us look in the eyes of the international community amidst a humanitarian crisis?

Make no mistake, the world is watching. We have everyone’s attention, and for the government, there may be no politically expedient decision available to them. Taking into account, that while observers within the international community do not go to the polls and elect our leaders, they do, however, help to feed our families by visiting our shores. And in such a time when our economy has received such a staggering blow, the last thing the government and citizens need to do is show ugliness in a time when love should illuminate every man, woman and child in this country – Haitian and Bahamian.

Hurricane Dorian has connected us in a way that we cannot ignore. And while it may be difficult to accept for some, the reality is that we are not a homogenous society.

Rather, we are made up of different cultures and history – a history that Hurricane Dorian intertwined in the space of two days.

Like the philosopher George Santayana said, later popularised in Winston Churchill’s famous speech to the House of Commons, “Those who fail to learn from history are condemned to repeat it.”

There is a valuable lesson for us in this tragedy. And in perhaps what may be our darkest hour when we are all going to have to pick up the pieces together, it would be best if we learned it.

I wonder what the Civil (read HUMAN) Rights Leaders of the 1960's would think of the attitude of SOME Bahamians towards their Haitian BROTHERS???

Keep in mind that people from around the world are donating relief to their HUMAN neighbors NOT just their Bahamian brothers and sisters!!

I suspect The Tribune had little choice but to write this "humanitarian sympathy card" for the illegal Haitian community. Most Bahamians are sadly unaware of the powerful foreign forces at play in looking out for the interests of the illegal Haitian community over the interests of Bahamians. Sadly our political leaders and some of our media outlets are succumbing to those forces whose hideous agenda is not at all aligned with the interests and future well-being of the vast majority of Bahamians.

Be careful who you shed a tear for my fellow Bahamians; our sovereignty, national heritage, culture, standard of living and overall quality of life are very much on the chopping block now. We see it in our failed education system, our failed healthcare system, our crumbling infrastructure (no electrical power for long hours each day, soon no adequate supply of potable water, etc.), our very costly and over-bloated nonproductive civil work force, our ever growing social welfare handouts, our soon to be bankrupt national insurance fund, the brain drain caused by our best educated Bahamian children no longer willing to live in The Bahamas, etc. etc. etc. Who's playing the sympathy card for the vast majority of Bahamians who feel they are now under siege with no protection being afforded by their elected officials.

The humanitarian crisis that we face is mostly an illegal immigrant humanitarian crisis. We could better house and care for everyone if we weren't swarmed by illegal immigrants. How can a country plan for a humanitarian catastrophe when not all of its residents stand up to be counted? How can you plan to safely shelter your citizens and residents when thousands flee from bushes at the 11th hour running for safety? How can so many people from another country care so little for the very country that they are fleeing to? How can people care so little for their family's own well being that they continue to breed even though they can't afford it? How can a mother and father not care to house their family in safe and sanitary conditions? And for those of you who simply say that we should legalize them all, do you even know how many there are? Can you even give a maximum number that we should make legal? Is 10,000 too much? What about 50,000... 100,000?

200,000 Haitian legal/illegal immigrants combined according to a Haitian publication. If this is true, is it still xenophobic or the simple truth when citizens express concern about overcrowded classrooms and clinics, sprawling shantytowns, Haitian gangs, etc. No one is ever prepared to uncover or face the facts and it is never the right time according to illegal immigrant enablers.

I wish every Bahamian would periodically visit the website link you've provided immediately above. As a Bahamian I'm both horrified and appalled at the following paragraph in the linked article: