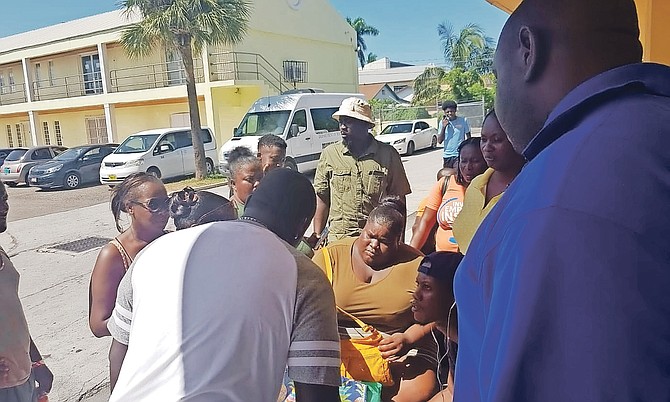 HURRICANE Dorian’s devastation and aftermath has drawn the attention of some of the top US government officials in Florida.

Florida Governor Ron DeSantis said on Thursday that his state’s businesses and citizens are prepared to help Bahamians affected by the storm but the relief must be provided in this country, not his state.

“If you just need the relief, that’s not what Florida’s set up for,” he said. “Florida is helping to send resources to the Bahamas so the relief can be administered there.”

He said he understood the Trump administration’s decision to deny Temporary Protected Status to Bahamian storm victims, which would have allowed them to live and work legally in the US while Grand Bahama and Abaco recover from the storm.

“TPS is only for people who are already here,” he said, “so I think when people are saying ‘oh, let the people who come get it,’ but that’s not what it’s for. TPS is if you’re in the United States, something happens in your home country, then you can apply for it. So, I don’t even think it’s applicable and I think the Bahamian government has not asked for it. And so I just don’t think it would even apply.”

For his part, US Senator Marco Rubio said helping The Bahamas is a moral imperative and a way of fending off China’s influence in a country so near the US.

In an opinion piece he wrote for the Miami Herald, Mr Rubio wrote: “For many of us in South Florida, the devastation in The Bahamas caused by Hurricane Dorian is personal. Not only have we lived through destructive hurricanes, but Bahamians are our friends, neighbours and family members. The majority of Bahamian-Americans reside in the state of Florida and our ties to the forebears’ nation remain a source of great cultural and economic nourishment... By devoting available military and medical assets to the recovery effort, we have the ability to help our afflicted neighbours and family members and save Bahamian lives. I am advocating these measures because directing resources to assist Bahamians is the right thing to do. But there exists an additional imperative on the security national level, as well: if we fail to rise to the occasion, China will step in to seize the moment and exploit the recovery for its own nefarious purposes.”

An official from the Chinese embassy in Nassau has rebuffed such suggestions. Haigang Yin, an embassy spokesman, told the Nassau Guardian that China is not trying to compete with any other country to provide relief to the Bahamas in the wake of Hurricane Dorian.

Many Bahamians have witnessed the mid-day shift change of construction workers on The Point Development Project. It truly is a shocking spectacle to behold - literally hundreds of Red Chinese workers streaming across West Bay Street to the construction site from the tenement high-rise building just East of The Flowers property owned by the racketeering numbers thug Craig Flowers. The vast majority of the Red Chinese workers are clearly low-skilled and one can only wonder how is it they were able to obtain work permits when there are so many unemployed young Bahamian men capable of doing the same work. Vomit Christie and his cohorts in the last PLP government must have been quite literally laughing all the way to the bank as they sold out their country to the Red Chinese. But what has Minnis done about this glaring injustice since he took office? Appointing Foulkes as Minister of Labour was perhaps even more foolish than appointing Desmond Bannister, Darren Henfield and Frankie Campbell to their respective cabinet posts.

Same as PM Minnis, US Senator Marco Rubio is purposefully refusing to face the fact that undocumented illegal HAITIANS are 90% recipients of all relief donations.

Donald Trump is correct. However, he too didn't have the gonads to identify illegal Haitians as the main threat preventing Bahamians ease of entry to the U.S.

From a humanitarian viewpoint, illegal Haitians must indeed be helped, followed by repatriation. Minnis cannot possibly be so stupid to believe illegals will register for his "tent city-dwelling" initiative. Not one illegal Haitian will set foot anywhere near tent cities!

It is no coincidence that murders and other crimes have already spiked since Minnis brought in 1000's of undocumented Haitian illegals. The stupid government didn't even have enough sense to fingerprint these illegals before setting them free to terrorize Nassau!

Asinine stupidity continues to be the order of the day with the government.