‘I Just Want To Bury My Mother’ 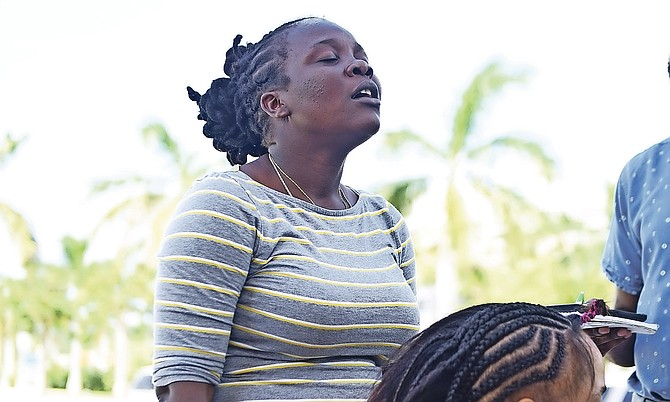 AFTER claiming she lost six relatives and a godfather during Hurricane Dorian’s rampage, Cithia Cilien just wants to return to Abaco to bury her mother, whose body she believes is still trapped under debris in the Pigeon Peas shanty town almost three weeks after the storm ravaged the island.

Her mother, Elvitha Charles, 63, died when a piece of plywood struck her head as winds intensified and water surged inland. Though the two were in a church shelter, they left with five others for the Peas. They thought it was safe to travel between their shelter and home to secure their valuables until the weather made such trips impossible and they thought warnings about the storm’s strength were overblown.

Ms Charles’ last words were “forgiveness, forgiveness,” which she shouted in Creole before the object flew towards her, Mrs Cilien said. Her brother, 25, dropped their two-year-old nephew and began to cry when his mother fell into the water.

“I had to grab my nephew, put him over my shoulder and tie my mother to something so the body wouldn’t float,” Mrs Cilien said.

She saw her cousin soon die too. The 34-year-old was inside a house and didn’t want to come out.

“When he decided to come out, I saw a plywood coming, I say ‘cuz put your head down,’ but he was too excited to come out, so I see the thing just ‘bloop’ and my brother say, ‘cuz head come off,’ and when I look, cuz was next to my mummy,” she said. “When I went back on Wednesday, I see his foot next to my mommy.”

Her loss didn’t stop there.

Mrs Cilien said her husband was with her for awhile but went back to the Peas to get his father before being killed when the roof of an unfinished church he used to shelter himself collapsed. Though her father-in-law is safe, two other people who died at that church were her cousin and godfather, she said. An aunt of hers died near the Chances web shop in Marsh Harbour and her uncle’s corpse was in a bush near a Catholic church in the area, she said.

Here in New Providence, her accommodations at a South Beach emergency shelter where she is staying are comfortable, she said, with meals served on time and the environment conducive for peaceful sleep. But these things don’t matter to her until she can verify that her mother’s remains in particular have been consecrated.

“You have to walk there and lift things to find that she’s there,” she said outside the Kendal Isaacs Gymnasium, where she visited her father amid reports that workers have yet to dig into the rubble of the Mudd and Pigeon Peas. “Unless they clean the whole Peas, unless they took out everything and move every house and make it look clear, I won’t believe my mummy’s body is moved.”

Hundreds of law enforcement officers are on Abaco and men in hazmat suits are scouring the island for bodies, but Mrs Cilien, 27, is willing to bypass them all to retrieve her mother’s body herself.

“If I could just go in the morning, get her body and bury it and come back to Nassau in the afternoon, that’s it,” she said. “I’ve gone to NEMA, NEMA sent me to CDU, CDU sent me to the morgue and they have me going up and down so I gon’ wait and see until they allow us to go to Abaco so I could bury it myself.”

The religious teachings of her mother and elders in the Haitian community are ringing through her mind, driving her desire to retrieve the body.

“They always said if the body does not fully rest, in the future it will be a problem for me,” said Mrs Cilien, who was born in Abaco and left for Haiti for seven years as a young child before returning. “It’s not that I believe it, but I think it will happen.”

She last saw the body of her mother two days after the storm. It was right where she left it, buried under rubble. By Wednesday, September 4, it was swollen. By Thursday, people warned her it would burst.

“Everybody I ask to help move her, they say no, they don’t want get infected,” she said. “The elderly Haitian people told me If I move her and she burst, it’s not going to be good for me. I don’t care about anybody help anymore, I have to go get my mother.”

A truly sad story, but it is one of many hundreds! The unfortunate reality is that many remains may never be recovered. Too much debris to remove, decomposition and not knowing if bodies were removed by tidal surge.

Sad sad affair, but nothing can be done for one individual at this point!