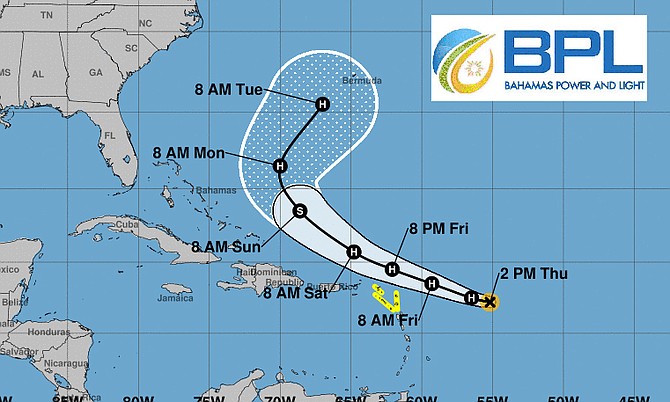 Thursday afternoon UPDATE: Jerry is now a hurricane – the 2pm tracking map can be seen above.

TROPICAL Storm Jerry is not expected to be a major threat to The Bahamas but is expected to skirt the southeastern islands on Sunday before heading away from the country, a local meteorologist said yesterday.

Basil Dean, deputy director of the Department of Meteorology, said at this point he is not "overly concerned" about the storm, but urged people to monitor its movements in case there are changes to the forecast track.

"Looking at the models, they suggest that Jerry will come fairly close to the southeast Bahamas on Sunday morning but a sharp turn to the north and then eventually to the northeast is expected," he said.

"And should that pan out, it means that Jerry would not move through the Bahamas but instead away from the southeast Bahamas come Sunday evening headed into Monday."

However, Mr Dean said the southeast Bahamas and the Turks and Caicos Islands can expect an "increase of rain showers" from the system.

He explained: "As you know, the storm systems are fairly broad so more than likely they will get a little bit of rain out of that system. I see it staying well to the east of the southeast Bahamas through Sunday.

"At this time, I would not be overly concerned but as we always say we will continue to monitor it because as you know these storms from time to time misbehave.

Mr Dean added: "But, I'm banking on my models and I'm feeling kind of comfortable that it will shift northward then northeast before reaching the Bahamas."

In a Facebook post yesterday, the Bahamas Department of Meteorology said the tropical storm is strengthening over the Atlantic Ocean.

The post read: "Jerry is moving toward the west-northwest near 14 miles per hour. A west-northwest motion at a slightly faster forward speed is expected over the next few days. On the forecast track, the system will be near the northern Leeward Islands Friday and pass north of Puerto Rico on Saturday.

"Maximum sustained winds have increased to near 50 miles per hour with higher gusts. Jerry is forecast to become a hurricane by late Thursday, with little (change) in strength anticipated on Friday and Saturday."