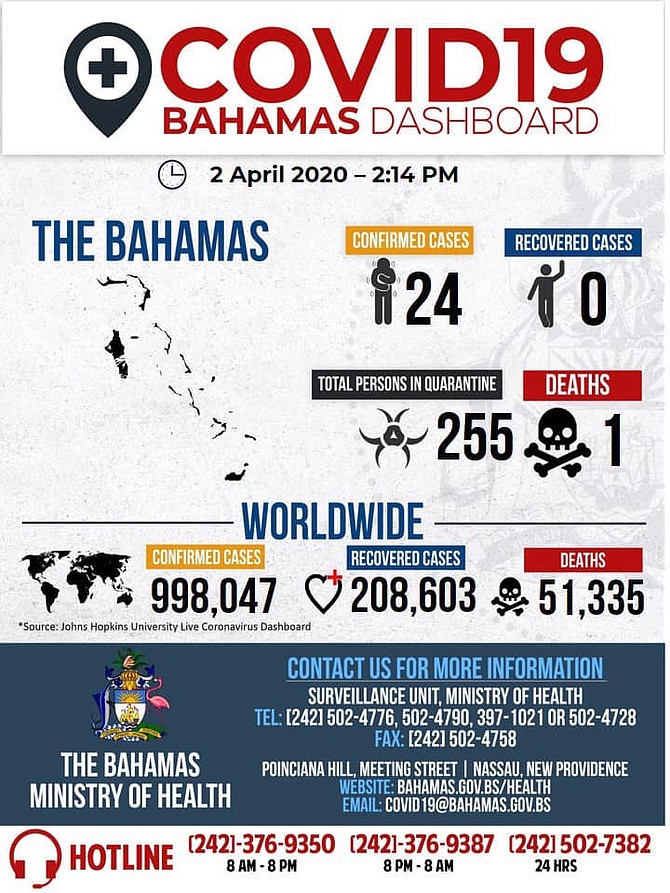 UPDATE: THE Ministry of Health announced that two COVID-19 patients who were being hospitalised died Thursday night, bringing the total number of confirmed COVID-19 deaths to three. FULL STORY HERE

THE number of confirmed COVID-19 cases in the country has jumped by three to 24 and a nine-year-old girl is among the infected.

Meanwhile, a 72-year-old healthcare worker with COVID-19 is in the intensive care unit.

The three new cases include a 79-year-old New Providence man and an 80-year-old Grand Bahama man, both of whom had no history of travel; and a nine-year-old girl from New Providence who has a direct link to case eight, officials said.

Almost all of the recently confirmed cases are people older than 55. It is not clear how many of them were tested through contact tracing or encounters with the healthcare system.

The Ministry of Health said case 17, a 67-year-old woman in New Providence, is under investigation, meaning contact tracing is ongoing in her case.

The country recorded its first COVID-19 death on Monday when 57-year-old Kim Johnson-Rolle died shortly after arriving in New Providence from Bimini.

He urged people to obey social distancing guidelines and to stay at home.

“Our greatest tool in the fight against this virus is following the public health advice to be physically distant from one another. There is no vaccine for this virus as yet. There is no cure,” he said.

Dr Minnis also said 50 healthcare professionals have been sidelined because they were exposed to the virus.

He said a volunteer hotline is being set up to register people interested in contributing to the COVID-19 fight.

Asked what tools officials will use to address community spread in the eastern end of New Providence, Dr Merceline Dahl-Regis, the country’s COVID-19 coordinator, said there are various survey options under review by officials, including rapid testing, temperature monitoring and community quarantine. She said hotpots are determined by the number of contacts per case, among other things.