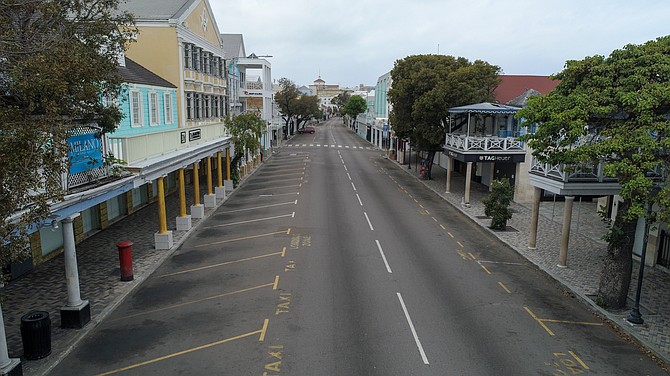 A deserted Downtown Nassau at the weekend: The COVID-19 pandemic has taken a major economic toll on the nation, but the IMF projects that the Bahamas will swiftly rebound with 6.7 percent GDP growth in 2021.

The International Monetary Fund’s (IMF) projection yesterday that The Bahamas will swiftly rebound from COVID-19 despair with 6.7 percent GDP growth in 2021 “must be taken with a grain of salt”.

Gowon Bowe, Fidelity Bank (Bahamas) chief financial officer, told Tribune Business that any economic growth projections at this point in the pandemic “are simply a punt” based on economic models whose underlying assumptions are likely to change rapidly as the virus evolves.

Warning Bahamians not to place their hopes on such forecasts, even though they represent a glimmer of hope for both private sector and workforce, Mr Bowe said it was impossible to predict how long and deep any COVID-19 related recession will be.

He added that “the earliest” anyone could accurately predict The Bahamas’ GDP (economic output) will probably be June, as he urged against “false prophesising” that was either overly optimistic or preached “doom and gloom” when it came to this nation’s prospects.

Mr Bowe was backed by James Smith, former minister of state for finance, who yesterday told Tribune Business that the IMF’s forecasts were best described as “guesstimates”. He added: “I don’t see 2021 being any more robust for anyone really.

“I can see this thing stretching out in the best of circumstances into 2022, and maybe longer for us. We’re closer to this thing even if it’s all speculative at this stage. Our major hotels are closed and we have no idea whether when they open they’ll do so at full capacity because that depends on demand from the US. It’s going to be a long and slow road coming back.”

Mr Smith said much hinges on how rapidly travel and tourism confidence rebounds from the COVID-19 health fears, and the willingness of persons to travel again on airlines and cruise ships. And he warned that companies were likely to re-open with much-reduced workforces.

“Once you send that amount of people to the unemployment line, it doesn’t follow that when things come back again companies will take on the same number because they have found they can do more with less and see an opportunity to get rid of certain categories of workers, such as older for younger, who come at half the price. Once you do that, it hits aggregate demand,” Mr Smith added.

Messrs Bowe and Smith spoke out after the IMF, in its first COVID-19 World Economic Outlook, forecast that The Bahamas and most of its Caribbean neighbours will rebound swiftly from arguably the greatest economic contraction - or depression - seen since the 1930s.

The Fund’s forecast that the Bahamian economy will shrink by 8.3 percent in real terms during 2020 is in line with Moody’s estimate of an 8 percent contraction due to the tourism industry shutdown and wider impact of the Government’s national lockdown.

Applying the IMF’s 6.7 percent GDP growth estimate to the $9.87bn figure results in Bahamian GDP (gross domestic product) rebounding to $10.531bn in 2021, a figure that is just $232m below the output for 2018. This, if it comes to fruition, signals that much of what was lost to COVID-19 will be recovered in 20 months’ time.

Such a sharp, rapid rebound is in line with the IMF’s forecast for the rest of the Latin American and Caribbean region in 2021. And Moody’s, the credit rating agency, is also forecasting a much longer climb out with projections of just 2 percent GDP growth for The Bahamas in 2021.

Even the IMF itself yesterday warned that there was significant uncertainty about the strength of the global rebound, with its economic counsellor warning: “Much worse growth outcomes are possible and maybe even likely.”

The Fund added that its forecasts were highly uncertain, and there was every likelihood that the economic cost of the pandemic will be worse than currently predicted. It modelled several scenarios, and said recovery relies on stimulus measures being effective in preventing large-scale corporate failures, limiting job losses and mitigating the financial impact.

Mr Bowe, a former Chamber of Commerce chairman, told Tribune Business of the IMF’s Bahamas forecast: “To be perfectly candid, any persons making projections as of today are simply making a punt at this point in time.

“We simply don’t have sufficient evidence of behavioural patterns coming out of COVID-19 to make any reliable projections. The best we can be doing now is stress testing what if things are this bad, what if things are less bad. What we have to be focused on is monitoring the true level of what is taking place and emerging from it, the health crisis, and then the behavioural patterns.”

Mr Bowe said the pandemic’s economic impact on The Bahamas has already been subject to a wide range of forecasts, including estimates by two Inter-American Development Bank (IDB) economists that the economy could shrink by more than 26 percent in 2020 if the tourism shutdown lasts the whole year.

“My main contention with what the IMF, Moody’s and all of them have said is that it is only them trying to remain relevant, sadly,” he added. “Anything on the positive or negative side has to be taken with a grain of salt and understood that they’re only projections.

“Let’s not prophesise doom and gloom, but equally we ought not to give projections where people later say: ‘You said how this is going to be’..... If you ask me, the earliest we will be able to project what The Bahamas’ GDP is going to be is June.”

Mr Bowe continued: “The IMF intervention, the Moody’s intervention with the review for downgrade, and even our own government, what we don’t want to be doing is false prophesising right now. We don’t know how deep and long the recession is going to be.

“We don’t need to be creating the doom and gloom because we don’t know. People may come out of COVID-19 stressed and look for avenues to travel. It’s unlikely, but it could be possible.”

The IMF is no different than Moody's, IDB, etc. All very full of it !!

Also don't forget the last head of the IMF, now head of the EU's Central Bank, Ms Legarde, was the originally the French Finance Minister and she left the French in a worst state than it was before she was appointed! So IMHO the IMF is just a location for jobs for the boys/girls, a money pit for failed politicians and big tax free pensions.

If an economy shrinks by 8 percent and then grows by 6.5% that is still a bet contraction of 1.5 points. The IMF may be placing it’s bets on what happened after the Spanish Flu pandemic in 1918-19, where the economy quickly rebounded and grew at an exceptional rate. But at that time a war was going on that killed out a great portion of the world’s population , in addition to the swine flu (Also called Spanish flu because Spain was one of the countries that was not at war and was among the first to report on the flu), which also reportedly killed millions ( over 600,000 in the US alone. So this led to a free and booming economy, where persons were able to hold two and three jobs or take over businesses and trades where the owners had died. This gave the average household double disposable income and as they spent more the economy was able to flourish. These same factors are not available today as there is no world war. Also unless there is a second wave of Corona, like there was in 2918, the death toll will not be as high. But the US does have an over anxious and energetic president who faces re-election in a few short months and will do everything to ensure that the economic bounce back is quick and sure. And China may be equally as anxious as it is economic dominance is based on mass production and low prices per unit. And like cruise ships and aircraft, hotel rooms inventory are in mass abundance and owners/operators will be anxious to make these productive and revenue generating in the shortest possible time.

The story's photo of a deserted Downtown Nassau, so reminds many who still around who fought the hard battle of the hatred behind TV commercials that comrades Sir Stafford , Pop Symonette and Business Establishment all chirped in pay for to be beamed onto colony's rooftop TV antennas that were being ran non-stop out the Miami TV channels of a boarded up Bay Street ...intended as a dire warning of the economic disaster that awaits Out Islanders in the many thousands if they didn't vote their white Bay Street, UBP party back into governing office come the early general election day be on 10 April 1968.
Wow! Can you even want imagine what a difference it would've made colony had the Black Voters listened to comrades Sir Stafford and Pop Symnette's TV commercial messages. Nod once for yeah, twice for no?

;-) Re picture
Now is the time to correctly install/level manhole/drainage covers and deal with all the pot holes, I'm sure the social distancing can be addressed without any problems! ;-)