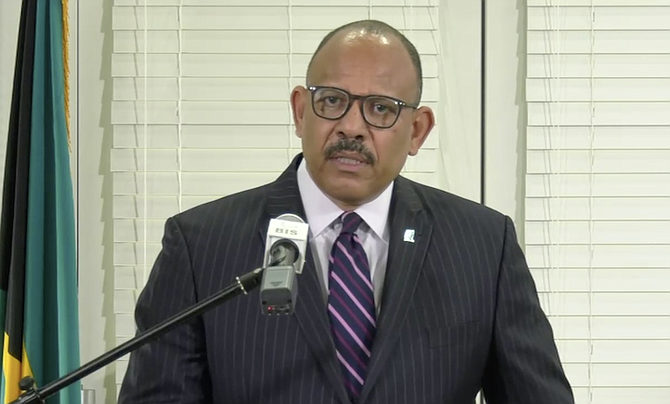 EXPANDED COVID-19 testing will begin this weekend on high-risk populations, as the number of confirmed cases increased by one to 54 yesterday and another death from the disease was recorded.

The expanded testing will include contacts of active cases, nursing homes, the prison and health care workers.

As health officials finally move on expanding testing as many have called for, Health Minister Dr Duane Sands said lockdown restrictions in Family Islands with no reported cases could be relaxed soon.

All of the deaths were from the category of the most vulnerable, ranging from ages 50 to 91, Dr Sands said. Five were men and the remaining victims were women.

Seven of the nine cases had comorbidities or underlying illnesses; four or 44.4 percent of the cases were obese; three out of nine or 33.3 percent suffered from hypertension; two experienced asthma; and one out of 9, or 11.1 percent, suffered from either sleep apnea, high lipids in the blood, renal failure and diabetes.

Nine of the positive cases are healthcare workers. Up to press time, 895 people were in quarantine.

“My fellow Bahamians, it is a fact that as of April 16, our COVID-19 confirmed deaths are 6.4 times more likely to have comorbidities or underlying conditions,” Dr Sands said yesterday. “Our surveillance team will continually pursue contact tracing for persons who were exposed to the COVID-19 cases.

“We have identified 892 contacts through our contact tracing system. It has been proven that a country’s ability to appropriately monitor, evaluate, and implement policies and clinically support its citizenry are keys to containing an outbreak of COVID-19.

“One of the linchpins of evaluation of COVID-19 is laboratory testing. The World Health Organisation and other leading health institutions support enhanced testing capabilities.

“Consequently, the Ministry of Health is planning our testing expansion for COVID-19 in at-risk populations such as contacts of active cases, nursing homes, the prison and with health care workers. Expanded testing is critical for us to have an increased understanding of the pandemic in The Bahamas so we can plan and prepare to protect these vulnerable populations.

“To determine our COVID-19 positive cases and to gauge community spread, it is important to have a sustained testing mechanism.”

He also said: “We believe that each of these groups are separate and we have the capacity to test all of them simultaneously. So we will target health care workers. We will target persons in assisted living homes. We will target those persons in the prison with a goal of expanding the total number of persons tested on a daily basis over time and ultimately we will get to a point where we believe we will have an even more representative sample of what is going on in our communities.”

The government is exploring the incorporation of rapid testing. As it stands, the gold standard of testing and most reliable test is the genetic/molecular test, or real time polymerase chain reaction (RT-PCR) test, Dr Sands said.

Officials, however, say rapid tests have a reputation to inaccurately give results.

Dr Sands said an in-country validation will take place to ensure the 10,000 rapid kits now here meet the standard. If they do, they will be used. He said there are 7,000 RT-PCR tests also.

For her part, health consultant to the Office of the Prime Minister Dr Merceline Dahl-Regis said the Easter holiday weekend proved successful and allowed the country to avoid about 26 new cases. But she also noted that following the weekend lockdown, the streets are flooded with people who do not practice social distancing. It could have a negative impact on the progress made, she suggested.

She pinpointed several models produced by local health experts that showed the marked progress. She stressed that it was critical for people to maintain social distancing and avoid gatherings to see continued curve flattening.

“You see the effect of the Palm Sunday weekend lock down,” Dr Dahl-Regis said. “Then look at the extended lock down period over the Easter Holiday. Here the curve has moved to the right so follow what was the project curve. Thanks to a number of our modelers it shows that we have probably avoided 26 additional new cases by the lock down over the Easter holiday.

“We’ve been asked by the minister and the ministry, ‘We don’t want any more lockdowns. We are tired of the lock downs. When can we reopen?’

“We have looked at two models.

“…These models seem to have a fit based on the data that we have provided. If we continue with what we are doing now, the social distancing, the avoidance of gatherings, we should follow the yellow line. If we don’t and we increase our cases by two per day we would follow the middle line and if we have a rapid increase in our cases you can see the number of cases we would’ve 60 days out from here.”

We are in totally uncharted waters, better not be stupid enough to try being the first country to experiment with reopening, until COVID19 is totally eradicated!

Although painful and inconvenient, reopening later rather than sooner is the best course of action, rather than risk an even larger second wave of infections.

Taiwan, Austria, Italy, and Spain have reopened segments of their economy to some degree. The Bahamas would do well to wait and see the results of what happens to them first, rather than taking questionable steps that might further damage the countries reputation.

… the virus cannot be "eradicated" as there is no cure, nor can it be prevented as there is no vaccine. There are only two options: 1) lockdown in some form- which prevents people from getting infected and becoming immune to the disease or dying WHILE preventing large amounts of sick people from overwhelming hospital services or 2) doing nothing which allows people to get exposed, 80% will have no issues and become immune to the disease but the vulnerable will die. Based on the amount of mass gatherings we have had in this country, most people have probably already been exposed, so we need to do antibody tests for those people and sent them back to work! Then lets see what happens!

"Expanded" testing should have been started one month ago!

At least 2 months ago!

The history of this tragedy will clearly show three huge mistakes were made early on by our elected officials:

1) Airports and seaports were not shutdown much sooner (Minnis and D'Aguilar were too concerned about going without tourists and were unwilling to take the lead in upsetting the cruise ship companies);

2) Minnis and Sands made no effort when the writing was already all over the wall to procure large supplies of testing kits, medical-grade masks, etc. before the demand for these items kicked-in from other countries like the US; and

3) Our government foolishly trusted the misinformation about covid-19 that was originally disseminated by representatives in the Bahamas of the ruthless Xi Jinping communist regime.