Left In Tears As She Pleads For A Little Help 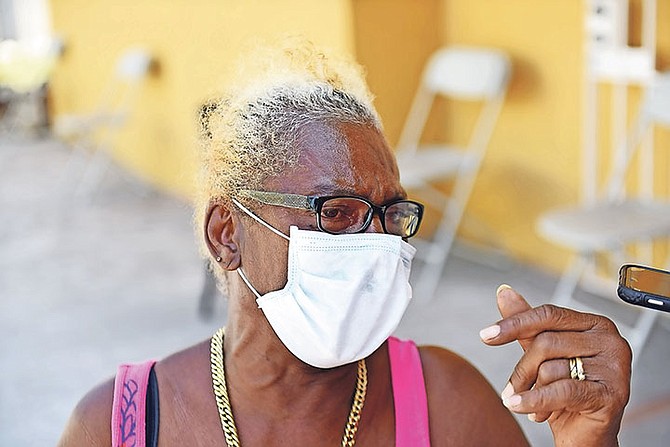 Linda Brown in tears at Social Services on Baillou Hill Road as she speaks with The Tribune yesterday. Photo: Shawn Hanna/Tribune Staff

FOR the past four weeks, senior citizen Linda Brown has been unsuccessful in trying to receive assistance at the Department of Social Services.

She went to the department around 9am yesterday for help, only to be left waiting for nearly three hours, she said, as pain caused by a pinched nerve added to her agony.

Visibly in distress, the 64-year-old came out of the department’s office on Blue Hill Road with tears in her eyes, shouting in frustration.

“(I came) for food stamps and I ain’t get it yet,” she said. “I still out here waiting… Keep telling me go sit down. Go, come back; go, come back. Four weeks. Four weeks I been running behind for this.

“At the age of 64, what I doing out here in this corona thing….Why should I be out here to catch this corona? I use work for government... I can’t work… I fall down on the job (in) 2014. Only $500 I get from National Insurance and getting a hundred something from the treasury, that’s all I getting. That can’t cover nothing (sic).”

She said officials at the department have asked her for a letter from the National Insurance Board detailing her pension benefits.

She told this newspaper she has car payments and needs help with her electricity bill. Living in a government unit on Windsor Lane, Ms Brown said she has told her area representative to check on the other elderly people residing in the unit.

While there was not a long line at the department’s Blue Hill Road location when The Tribune arrived yesterday, some people waiting on assistance said they had been there since early morning.

About 16 people were sitting outside the building.

One person said people were instructed to write down their names and department officials would call them back.

A sign posted outside advised all those from tourism-related industries to apply for assistance via the department’s online portal. The sign stated those individuals would be contacted by a representative once the application had been processed.

Debra Rolle has been unemployed since March 28. She was working at Pro-line Underground on Carmichael Road.

She came to the Department of Social Services for food assistance.

“I mean the challenge is food because you’re not getting any income coming in,” she said of her needs.

She said she wished the process for applying for help was easier given the circumstances.

“They just need to make things more easier because it is a pandemic,” she added. “Make it more easier and don’t make it so difficult. That’s the only thing I could say but other than that I can’t expect nothing much because it is a help. They only helping. They just doing what they could do.”

Jacob Paul, a hurricane survivor from Abaco, said he arrived at the agency at 5.30am. He was also seeking food assistance or any help he could get, he said.

He said he is getting by with the “little” he has on his bank account.

He said the department has already helped him in the past.

“Twice I came here… They helped with appliances and yeah, just basically food assistance... Social Services been real good to me, I must say,” he said.

My heart goes out to this terrified lady, and the 1000's of other people caught in the middle of this COVID19 dilemma.

Unfortunately, despite trying, the governments' system is totally unprepared to provide the emergency spontaneous assistance required to citizens, not to mention the high volume of people claiming daily.

People not caught up in this mess cannot possibly begin to imagine the stress and mental anguish this poor woman and 1000,s of Bahamians must endure in these unprecedented hard time.

Churches are abundantly plentiful in every community, perhaps the government could look into using them to at least coordinating some form of immediate food assistance programs to people in need.

As an overwhelmed, self-employed small business owner that also can see no way of receiving government assistance, I too understand the frustration and fear of overnight being unable to provide for one's self and family.

Comrade SP. I want you to understand that this comrade sister's story, comes to light in face several indisputable reports making their way out over just days ago that 4,000 - 8,000 Abacioans are nearing running out food eat. This accounts for about half Abaco's population?**
Apparently. such stomach threatening reports are slow to reach the homes and offices of the two Abaco House MP's, who just happens both be members Imperialists red cabinet?

This is truly a heart breaking story. People will not be able to go on for much longer. That is something Minnis can't seem to understand from his ivory tower! There will come a breaking point for many people. God help us all!

As I read this story and the desperation of Linda Brown unfortunate situation brings tears on my face, I can NOT believe how officious theses little people in government are, the domineering way she is tossed around daily in order to survive is mind bogging, it is oblivious those employed to administer these programs, are heartless individuals not suited for their position

... the simple reality is the government cannot give what it does not have!! For decades governments have been borrowing and wasting billions of dollars, spending far more than they take in and those who benefitted from it never complained, but abused the system. Money has to come from somewhere, so the bloated civil service, those unions that squeezed the government around election time and bonuses government workers got around election time and all the money taken and not repaid to National Insurance and all the concessions given to foreign companies to attract their business along with poor individual handling of resources has to create a situation where some cannot get much. This generation that I see squandering their money, having children they cannot afford and living paycheck to paycheck will soon be in the position of this poor lady, crying for help, when they are no longer able to help themselves!

I hear you. My argument is the money is there to help everyone. It's being stolen to pad a few. The only answer is real honest leadership. I don't know if we will ever get there but that's the answer. Leadership will inspire a nation to be better. There's so much we could be doing

Nothing will change UNLESS there is a NEW leadership on the horizon, electing the FNM or PLP will do nothing.

Time for a new generation to step up

We desperately need two or more entirely new political parties. The new parties should carry no baggage in their leadership and administration from either the PLP or FNM parties whose corrupt political elite have destroyed our country's middle class and in the process bankrupted our country.

Time for a new generation to step up

… if that generation does not fear God and have common sense, nothing will change!

You mean if they don't step up things will get a whole lot worse for the Bahamian people under failed statehood!

Joe blow I love your comments, but I wanted to add that many government departments do not receive bonuses. You are thinking of quasi government as teachers, nurses and I believe police officers do not receive bonuses. Teachers in particular receive yearly increments until their salaries are capped and stays that way. Nurses on the Family Island that are on call nights and weekends may receive an extra something but no bonus. Carry on.

She needs a letter from NIB detailing her benefits? We need a better system than this. Government Departments should be able to interact with each other fir information. She has a smart card I assume. Why was it given and why aren’t people’s information accessible through it? Why frustrate people who actually need help.

I remember Diaguliar promising to fix this - a one stop shop for businesses to avoid turn arounds and red tape. Same needs to apply in such circumstances. Come on. We’ve got to do better!

Is there any way we can help these people? Some kind of Go Fund Me. Heaven knows I do not have it like that but what I can give I do. When we are able to move about, let us try to drop off care packages and a little monetary donation to the less fortunate in our communities. We can go on about government all day long but, but our neighbours need us now.

Not to playdown her plight, but she's only age 64, living in a government unit on Windsor Lane, can drive and has a car, and appears fit. There are many others in their 80's in need of serious medications with no close family or other support of any kind who are not nearly so lucky. Fact is, there are all too many others in our society right now who are much less well off than this lady, and The Tribune, with a little more effort, could have selected any one or more of them to be its poster example(s) for creating swelling emotions of concern and sympathy among its readership.