POLICE are investigating after videos circulated on social media showing a police vehicle on the premises of a liquor establishment.

The video seems to show the store selling liquor to the public despite orders preventing such stores from opening as part of measures to restrict the spread of the coronavirus.

Liquor being sold at a store 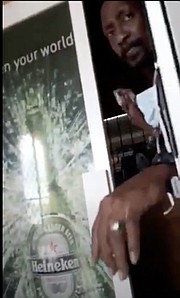 In a statement, police said: "It has come to the attention of the Commissioner of Police (Paul Rolle) that liquor licensed premises are open and selling liquor to members of the public, at a time when non-essential business establishments are ordered to be closed; and that police officers are present on the property. The commissioner is also aware of a video circulating on social media of an unmarked police vehicle on the premises of a liquor establishment."

Store staff in the video are seen to be wearing masks while taking orders for beer and rum. A marked police car can also be seen parked near the premises.

The statement added: "The Commissioner of Police wished to inform the public at this present time he has no authority to permit the sale of liquor by any establishment, nor did he sanction the presence of any police officer at any liquor licensed premises."

The deputy commissioner has been ordered to conduct an investigation - and Commissioner Rolle thanked the public for bringing the matter to his attention.

Open the whole sale stores.. not the bar rooms. extend the gas station hours at least there will be some circulation of money.

doc has no vision. but it is the peoples time so they the people must abide.j

The duty paid on containers of alcohol and cigarettes are MASSIVE...big business that puts lots of money into the treasury.

Has more than Davis

Can you imagine the rate of domestic violence and abuse to children that will increase if you was to open the bars? I can only imagine the stress and tension in the homes of many around the island. And let's be honest, some people would take their last to buy rum. You want the people broke, jobless, stress and DRUNK? LOL, get serious. KEEP THE BARS AND ANY WHOLE SALE LIQUOR STORES CLOSED.

P.S. Liquor will lower your immune system and will leave it compromised, stay safe Bahamas

Takes so damn long investigate an obvious but if you break curfew to venture outside to feed an Homeless person, the constabulary will be right there pounce out from behind bush for a disobedience act which can cost you and the hungry Homeless individual to be hauled before magistrate to receive a $1,500 fine for committing violent act feeding the hungry— or even land you in jail cell at Fox Hill prison for a year----some government's higher ups are goin' be heading straight down into burning flames!
The new Chief Constabulary, must've inherited a whole stack weird actors starring in all kinds roles in movie videos which supposedly the Constabulary's command have long been promising be investigate and report back - promptly to PopoulacesOrdinary. Nod once for yeah, twice for no?

What is you proof.

domestic violence is not caused by having a drink. It is so much deeper than a glass of wine. I often smile at the "I have the keys to the Kingdom" folks. who will drink a sweet soda instead of a glass of red wine,.

All things in moderation. The very first miracle. Jesus turned water into wine.

First and only time I've agreed with a post from Birdie....wow, strange times indeed....

Yeah, me too. And no political diatribe either. Hope it continues.

Why do you guys use flash for videos no way I am allowing flash.

And from the video the liquor store has almost doubled their prices. $70 for a case of beer that normally sells for $42 (or $24 in the US). $49.00 for the quarts. So let’s see, a 74 year old man was fined $250 for walking from his house to the corner to ‘stretch’ his legs. How much will these people be fined for price gouging and violating the emergency pro?

I dont understand y the cops is act like other cops dont be drinking on the job. All dese man dem yall beat half to death because yall was drunk as a bat! Everyone know the bar in nassau village where da chinese get kill is one of their favorite ones. Some of them so bold they buying beers when the bar full of people. What is piss me off is this whole fux bout investigation.....when have a police ever been investigated and found guilty? Yall know police formed from slave catchers? Thats why they still have this thing about the blue code. The white turn to blue and the black still black. Yall aint see police still is treat ya like a slave no matter where in the world. Jail is cotton fields, where u have to wrk against ur will. I hate police so much especially our own Bahamian police. I know not all bad but the good never outweights the bad. No one cant tell me nothing about no police, ive spent 7 years in court all because the police spoke personally with the judge and presented me as a crazy person, harmful to society etc. Ive never been arrested or had a charge in my life and i was still sent to fox hill.

How's indulging comrades be keeping a bottle of vodka handy for use as hand sanitiser. Nod once for yeah, twice for no?.

I have to get paint, electrical switches and lumber. If I can find these things I would hop out and buy them regardless. If I can sell things that other people need that I have advertised from before the lockdown, I can use the money and have no problem making adjustments to accomodate necessity.

Just let the d--n liquor stores open practising mask wearing and safe distancing. Enough already. This govenment needs to lighten up. They are creating needless stress on the public and loosing mucho revenue.

Seems more like prohibition than preventing the spread of the virus . They had to know this nonsense would create a black market for tobacco and alcohol. Wonder where Doc and Dem gets deirs? .

Be honest, I'll leave mask production others cause before the if, when virus grabs hold senior care residences, Care Workers, the Prison, Immigration Detention Center and Sandilands - the colony will be anxious for readily available locally produced kinds plant based immune system builders medicinal attention..... which means government has revisit decriminalisation.

We all know how this will end (it will involve a broom and a rug). They have the evidence so no need for an investigation, but they always say this when they already know the outcome.

Commssion Rolle is little different from his predecessor Ferguson when it comes to sweeping things under the rug.

From one who knows, (my five cents) alcohol "Firewater" is a social stimulator, when persons drink they always seem to want to socialize, talking and mingling in close proximity to each other and all fired up, for social distancing and order that will be a disaster, now on the other hand cannabis usually has the opposite effect.

I second that opposite effect.