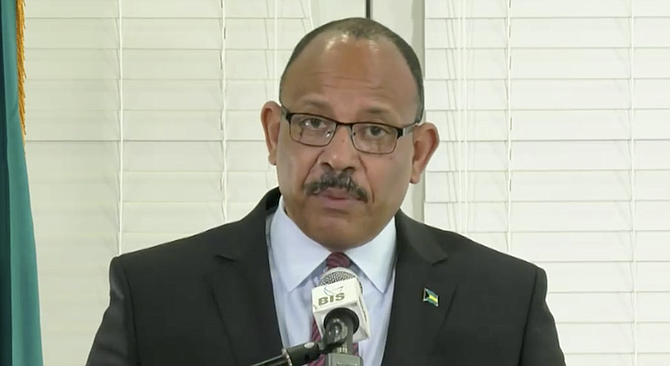 Minister of Health Dr Duane Sands announced on Thursday that two more people have died due to COVID-19: a 53-year-old man and a 51-year-old man. The total number of deaths now stands at 11.

There are also two new cases – both of them are women, one aged 29 and the other 52. The total number of confirmed cases is now 71. From that total, 61 are from New Providence, seven from Grand Bahama, three from Bimini and one from Cat Cay. Fifteen are healthcare workers. There are two newly recovered patients – 14 in total have recovered. Nine are hospitalised.

• Dr Sands also said visiting hours at public and private wards at Princess Margaret Hospital (PMH) are suspended. Patient updates will be given to an assigned family member by telephone. Food deliveries to patients will not be accepted. Those with special needs will only have deliveries allowed by arrangement with the ward staff. In a statement released on the matter, the Public Hospitals Authority said efforts are being made to provide video-conferencing for patients on the Children’s Ward, so that they can interact daily with a parent or guardian.

• The Minister added that there has been much public discussion over the Medical Surgical Ward at PMH.

He explained that the Sandilands Rehabilitation Centre referred a patient from the Robert Smith Unit to PMH for further medical management on April 5. The patient received treatment at PMH and was discharged on April 15 back to Sandilands.

Days later, the medical surgical ward of PMH was declared compromised on discovery of a confirmed positive COVID-19 patient on the ward.

Consequently the ward was closed to admission on April 18th.

The patient from Sandilands was returned to PMH on April 19th to be tested for COVID-19 and on April 20th it was confirmed that the patient had contracted the virus. The patient is now receiving care at the Doctors Hospital West facility.

The Minister said, in total, more than 200 healthcare workers are in quarantine. But he said upon completion of the risk assessment activity, this number is expected to be reduced dramatically.

One staff member, two patients and two registered nurses were quarantined for 14 days. Subsequently, all remaining patients on the Medical Surgical Ward 2 were tested. Contact tracing and exposure assessments commenced for those discharged from the ward and those who were in contact with the current patients on that ward.

The Minister said there are only four patients still on the ward. Three of the four remain in isolation and one remains on the open ward. As long as patients remain on this ward, Dr Sands said routine sanitation measures are being followed.

High cleaning will be done as soon as all patients are discharged.

Ma Comrades, how's it possible for any member PopoulacesOrdinary at-large not to finish reading this newest press release by the colony's health ministry. and not grown that more coronavirus nervous than you already were before you read it. Nod once for yeah, twice for no?

Can anyone say the average number of documented deaths recorded in this Country annually due to severe cases of other influenza/Corona type viruses or complications stemming from same? One ASSUMES Dr Sands has this answer.........

Typically we can expect 400 cases of 'flu per year and about 50 deaths.

… medical statistics in this country are unreliable because of undertesting (which we are also seeing in this crisis as well) and underreporting. I would bet that public and private clinics in Nassau or GB or Acklins, San Salvador or Eleuthera do not test or report flu cases and any deaths would be classified as something else.

Apart from the infection it would be nice to know if all these deaths had anything else in common or what happened between the time they were diagnosed and died!

Doctor Sands you are messing up big time. I use to believe you were one of the smart ones

I appreciate the transparency in this situation. This is needed more; especially if some of the people in quarantine are "essential workers". You don't have to give names but, the stores and locations should be public information.

"President Donald Trump suggested the possibility of an “injection” of disinfectant into a person infected with coronavirus as a coronavirus deterrent at the White House daily briefing on Thursday."

Somebody get this information to Dr Minnis immeduately. This could be the cure right here. Don't try to go through Sr Sands he may dismiss it as absolute rubbish, Dr Minnis will see to it that a proper investigation is conducted

I was very impressed with the tone today. They dropped the the lockdown is working language, they didn't talk about people driving up and down as the cause for the spread and they acknowledged that the infection rate is increasing. Most impressive they acknowledged that the situation at the hospital called for a review of procedure which has already started. You can only get to solutions if you look at what "is". I think they did a great job with a pretty difficult situation. Nobody expects perfection or for persons not to make mistakes...just be open, transparent and involve knowledgeable people, we know its a difficult job

No telling if PopoulancesOrdinary goin' jumps back 6 Foots to stand in stunned silence once the comrade Imperialists RedShirts elected's Pandora's Box lid gets post coronavirus lifted. There's no telling what unknown red kinds viruses going sprung out. Nod once for yeah, twice for no?

Thank you Francis_James.. Thank God we don't have a flu pandemic EVERY year! I do realize this one is particularly nasty, like Dorian, let's hope it's not a trend setter..