Bahamian Connection At University Of Kentucky 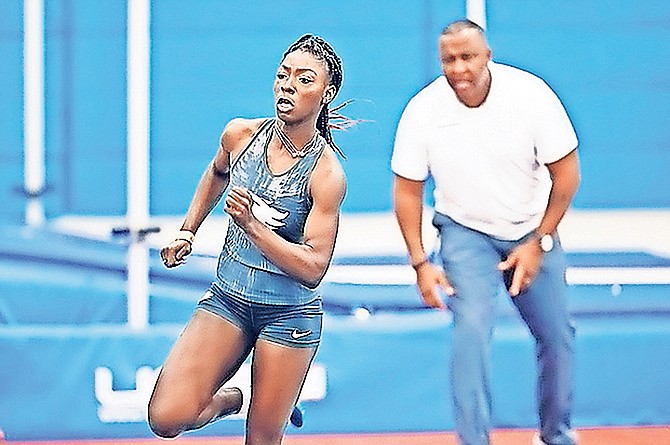 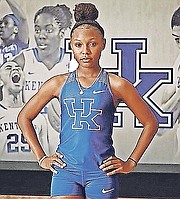 Like an aeroplane taxied on the runway for takeoff, coach Rolando ‘Lonnie’ Greene said he can’t wait for the University of Kentucky to get their new school year started with sprinter Jaida Knowles joining her fellow St Augustine’s College alumni quarter-miler Megan Moss.

Knowles, in making her collegiate debut, will follow on the heels of the successful debut of Moss’ shortened freshman season this year as the duo will form a Bahamian connection on the Wildcats’ track and field team in Lexington, Kentucky, where Greene will once again be joined on his coaching staff by “Golden Girl” Debbie Ferguson-McKenzie.

“With what she’s bringing to college, I think she will be successful in whatever she decides to do. She’s a genius academically,” Greene said. “So I’m so excited for her and I’m looking forward to have her making the same kind of contribution to our athletic programme as Megan did this year.

“Anytime you get great scholars with athletic abilities in your programme, you are doing it the right way. That’s the whole key to what we do. You are developing scholars and you are teaching them discipline through athletics so that they can go into the world and in their community and be a pillar or a leader to make a difference in the lives of those persons they come in contact with.”

“If she had any type of year like Megan had, we will be very, very pleased,” Greene said. “I think the Bahamas, as a nation, will have another option for relay legs, long or short. In my research on Jaida, she can run from the 100 metres to the quarter (400), so it gives the Olympic team another option for another relay to advance at the Olympic Games next year or the World Championships the following year.

“In my humble opinion, and I go back to Megan, I really believe maybe I need to drink more Mountain Dew on my perspective on the way how I look at things because I really believed that Megan Moss was going to shock people on the track this year. If she didn’t run 50 seconds, she would have been very close this year. I believe, if she was given the opportunity to run at the CARIFTA Games, the record would have been broken in the under-20 girls’ division or she would have ran very fast.”

As a freshman, Moss had produced the 26th fastest time in the nation in the 400m in 52.58 seconds at the Tiger Paw Invitational on February 14.

Fellow Bahamian and another former St Augustine’s College standout Doneisha Anderson, who was in her sophomore year at the University of Florida, had the third fastest time of 52.06 at the same meet.

Bailey Lear, a sophomore at the University of South Carolina, had the fastest time by all collegians of 51.60 that she ran at the 2020 MPSF Indoor Track and Field Championships on February 28.

At the SEC Championships at the Gilliam Indoor Track Stadium at College Station, Texas, from February 28-29, Moss missed the cut for the final of the 400m when she placed 20th overall in 53.23. Anderson had the second fastest time of 52.53, but was fifth in the final in 52.28.

Both Anderson and Moss had qualified for the NCAA Championships at the Albuquerque Convention Center in Albuquerque, New Mexico over the weekend of March 13-14, but the event was cancelled because of Covid-19, as was the reminder of the collegiate season, including the outdoor season.

Anderson, nor Moss competed in the 200m, but the Bahamas had two other competitors, who performed very well.

Parker, in her sophomore year, had also qualified for the NCAA Indoor Championships in the 200m, but Bethel didn’t make it.

Greene said with the way these young women performed this year, the future looks bright for the Bahamian sprint programme and he’s happy that he will get to groom two of them in Moss and Knowles.

“I believe that if Jaida comes in and she acclimates and doesn’t get distracted and do what she has to do and stay the course, understanding that she will always have time to enjoy the collegiate season, as Megan has done, I really think the sky is the limit for her,” he said.

“I believe the sky is the limit for any young man or woman once they apply themselves with the talent level that both she and Megan possess. So I’m happy to be able to have them both in our programme.”

“I personally can’t wait to see these young people and to just hug them.

“It’s really weird, but we love our kids like that. They can come in and talk to us about anything. So I just can’t wait for us to start. It’s a wait and see process, but when we do it will be worth it.”

At present in Kentucky, Greene said the state has had its death as a result of the amount of persons affected by the virus, but they are coping with it.

“We’re good. I think it’s important for us to do what the local authorities are telling us,” he said.

“We have to do the social distancing and to stay inside. You go out when it is necessary.

“You can’t just go out because you want to go. This is something that we just don’t know about. But I know the Greene family is staying inside. I don’t have time for that. I might go outside for about 45 minutes to breath and exercise, but for the most part, we are inside.”

He said his family had a little scare the other day when one of his sons got a slight burn and they rushed him to the emergency room, but it was the quickest that they ever got served.

Greene said they are taking advantage of their confinement at home as they may have watched every series on Netflix as they adhere to their slogan “stay at home and save lives.”