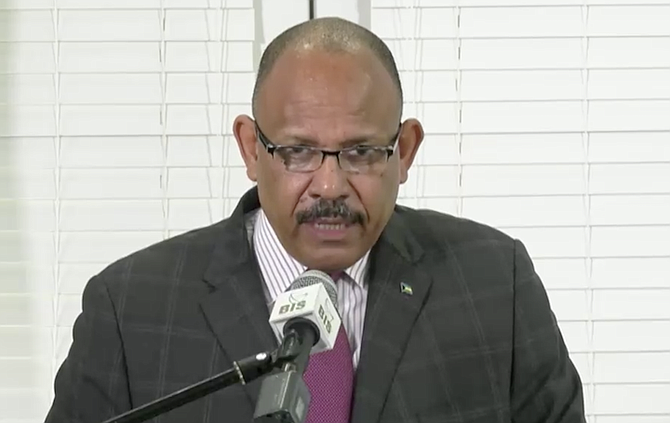 At Thursday’s press conference, Minister of Health Dr Duane Sands announced one newly confirmed case of COVID-19 in The Bahamas. This latest case is a 29-year-old woman from New Providence, who is currently in isolation at home. The total number of confirmed cases now stands at 81.

• With regards to two Americans who were allowed into the country on Wednesday, Dr Sands explained: “The Ministry of Health was prepared to receive a donation of 2,500 double swab diagnostic tests kits on Wednesday from a private donor. The approval issued was for the delivery of the cargo only. The whole world is aggressively competing for test kits – they are very hard to obtain. As Minister of Health, I thought this was a matter of urgency.

“We then received a last minute and unexpected request for the donors, who are permanent residents of the Bahamas and were traveling on the same plane, to disembark. The plane was here and we had to make an urgent decision.”

Dr Sands said he made the decision to allow the couple to disembark. He said they were not displaying symptoms, they were evaluated by a nurse, instructed to self quarantine for 14 days and they were tested today for COVID-19.

Also from the press conference:

• A swab testing exercise on Saturday for those who may have been exposed to the virus at PMH and Sandilands, saw approximately 225 tested with only one testing positive – that person is in isolation at home.

• Bimini is considered a “hot spot” – a surveillance team is currently there.

• Dr Nikkiah Forbes says The Bahamas has applied to be in clinical trials for antiviral medication remdesivir – which could shorten COVID-19 symptoms from 15 to 11 days.

It certainly seems wealthy non-Bahamians get to enjoy more civil liberties and rights in our country today than Bahamian citizens themselves.

One thing is for sure: There was a 'quid' - the diagnostic test kits - and a 'quo' - the permission to disembark the plane and remain in The Bahamas.

Also interesting to note that the decision for these two non-Bahamians to be tested today for covid-19 appears to have been taken after this matter flared up in the public domain.

" swab testing exercise on Saturday for those who may have been exposed to the virus at PMH and Sandilands, saw approximately 225 tested with only one testing positive – that person is in isolation at home"

In one day they tested 225 persons. Why can't they arrange 2 flights test the occupants of each flight on arrival and then quarantine any sick at home. What's the difference between someone who's in the Bahamas and sick and someone who's trying to get home and sick or..not sick. If we can trust the test as good enough to let the other 224 persons roam about free, it should be good enough for the returning Bahamians. The plane can be sanitized.

Are you serious. Persons that are tested positive for Covid-19 are allowed to quarantine at home. And, the government has allowed two Americans to come into the Bahamas and quarantine at their home for 14 days. Those of us who are stranded abroad, they want to bring in on a charter flight or ferry and put us in a quarantine facility, locked down and guarded by the defense force. No way! I am sorry, but this is not right.

... these kits (actually swabs) could have been sent by Fed Ex if they were really that important. Obviously something more is going on here!

Yeah they're terrified to be in the country that has had the worst response. I would be too.

You'd be safer in Haiti than the USA right now....

It’s more likely the two foreign donors bought their way in with the test kits. All pre planned / pre arranged.

Just another example of corruption, our country for sale.

Yep. Only two possibilities Dr Sands didn't tell the full truth or this couple carried out a major deception on the Bahamian government worthy of revocation of permanent residency given the seriousness of what was done.

I don't think they get it, we dont want you trying to try to save us by selling us.

Out of the blue they start talking about getting Bahamians home...then after the couple lands they start introducing qualifiers for transport...was it a ruse to get the rich people in without an argument?

per the latest numbers from the government on 30th April 2020

While you all are beating up your gums, we now have 2500 more much needed test kits. If it is a quid pro quo, so be it.

Thank you Dr. Sands for securing these kits. You would have been damned if you didn't and as you can see you are damned because you did. So carry on smartly. You and your team are doing an excellent job!!

You do of course realise that your remarks here pre-suppose a quid-pro-quo arrangement was all along in place and that now you're calling Sands' lame excuse for allowing the two Americans to disembark their private plane nothing but a bald faced lie.

The expression is bold faced lie. And I see no evidence whatsoever of Sands lying in this scenario....

The 2 Americans were actually 6 Americans. So Sands did not lie, he just can not count?

It is the point of the matter Geostorm. The Bahamian government spoke loudly with this action to the Bahamian people. It was a bad decision. The goverment has international connections and it is not believable that this "donation with a catch" was the only option. A donation is made with the heart, not with a stipulation. Interesting the names of these Americans remains nameless.

Smart move American P-residents, donate something essential and be allowed to enter the country. That is one sure way of getting back to your second home, others should follow suit, God knows we need and can use all the assistance we can get, besides we don't want the Chinese to be showing the Americans up. I don't trust Americans' intentions at times and I trust the Chinese even less.

Life is similar to playing chess. The rich knows how to play the game and the poor don't. What I did was learn how to play the game. I learned that the small man always get the sh...y end of the stick. So I stopped been a small man. The couple came up with a plan to get into the country and it worked. Generally, there are always ways to get what you want. All you have to do is use your soggy rice pudding like my science teacher used to say.

You get it....some clamor and ask "why?" Others look behind the curtain, understand, and gain access.

"Soggy rice pudding," - sounds like you were schooled in China.

So some of us is upset that the kits came privately, and this is the forum you use to vent your frustration on? It has to be Friday, the day before curfew. Those kits may be use to to test some of us on here.. would you refuse the test then because it came on a private plane with two american people who trying to pimp their way into the country? We need to get a grip!!

"The approval issued was for the delivery of the cargo only. The whole world is aggressively competing for test kits – they are very hard to obtain. As Minister of Health, I thought this was a matter of urgency."