Face To Face: Ginny’S Been Peddling The Recycling Message For Years - And It Pays Off 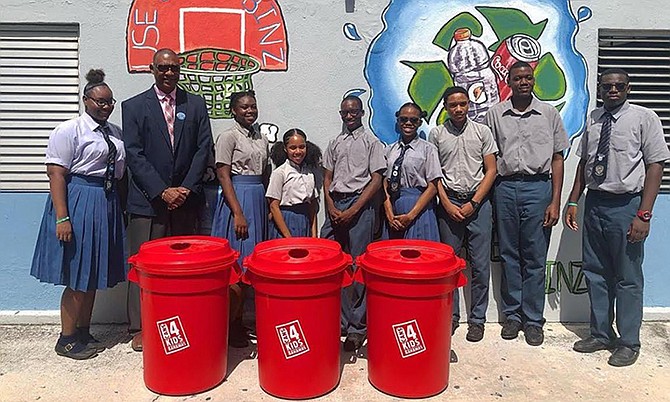 St Anne’s School is ready to introduce their new Cans for Kids bins.

Bahamians throw away more than $1.5 million worth of aluminium cans each year – cans that could have been recycled and that could have brought money back into the country. With that amount of waste going into the landfill, being strewn across beaches, ending up in the sea and becoming litter on roadsides we have every reason to want to do something about it. Virginia “Ginny” McKinney has been doing something about it since 1998 – she has been turning those cans into useful cash for school kids. In turn, children are learning the importance and value of recycling, creating more sustainable habits for the adults of the future.

For Ginny, recycling is a passion and a way of life. She believes part of the answer to solving The Bahamas’ needs for sustainability and economic stability lies in a nationwide commitment to reduce waste and develop a culture of recycling. 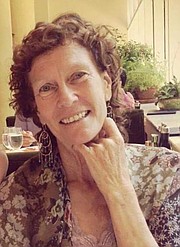 Virginia “Ginny” McKinney, CEO of Wastenot and Cans for Kids.

“If everyone makes one small effort every day to recycle something, it will make a big difference,” Ginny explained.

“It’s the collective that makes the impact, but we all have to be willing to do our part every day. So many things we throw away can be reused. In this world of finite resources, we need to reduce our carbon footprint. Reduce emissions and recycle as much as possible instead of asking the Earth to give us more and more.”

By impressing these values in the minds of children, we stand a better chance of having a cleaner and greener future for planet Earth. When kids can make money for their education by being environmentally responsible, it gives them even more incentive to recycle.

The system has been working well across the Bahamas through the Cans for Kids programme. Ginny is a member of the Bahamas National Trust. One of her fellow members started encouraging BNT members to bring their cans to the Village Road retreat, to raise money for the kids. But, the project became overwhelming and facilities there were not equipped for the load.

Initially, there was an attempt to set it up with the Bahamas National Pride Association, but it also did not have the capacity. Ginny, owner of Wastenot, was already in the recycling business. She decided to take on the project and 22 years later, it is still going strong. She made an investment and purchased a densifier to help compact the cans into briquettes. She then searched for a company to buy the crushed cans and found one in West Palm Beach, Florida, who turns them into new aluminium.

Schools got on board and teachers kept kids excited about keeping their schools clean, taking care of the environment and making money to buy supplies they need for programmes that matter to them. Coca Cola donates large sugar bags and Cans for Kids distributes them to various schools and associations. Once those bags are filled, a Cans for Kids driver collects them and takes them for weighing. Schools and organisations earn 30 cents per pound and a cheque is issued every three months. The market price of aluminum can fluctuate between 20 and 65 cents per pound. Anything earned over the 30 cents is used to pay staff, operating costs, maintenance of the densifier and shipping and brokerage costs. Tropical Shipping and Coca Cola have been helping make the programme a success for years.

The three main goals of Cans for Kids are to reduce the amount of solid waste that ends up as landfill, to enlighten the public on the long-term benefits of recycling and to raise funds for kids in the process. The hope is that the next generation of Bahamian children will make recycling commonplace, according to Ginny, who has been in the waste business for nearly 40 years. 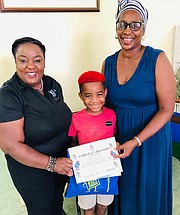 Cans for Kids project manager Lekeisha Brown-Thomas presents Kai Bastian, along with his grandmother, with his award for collecting 3,000 cans.

“Wastenot has always been a home for Cans for Kids,” said Ginny.

“The machinery lives here. The personnel of Wastenot are also working for Cans for Kids. We now have a project manager, Lekeisha Thomas, and we are excited to get the word out and get everyone involved in recycling cans to invest in programmes that benefit kids. For the past five years, Cans for Kids has captured only two percent of our can consumption through participating schools, businesses and other youth programmes. The other $980,000 worth of cans end up in the landfill, threatening its long-tern ability to accept garbage, on our roadside creating a dirty appearance or in our ocean where they threaten sea life for 80 to 200 years.”

The world’s beer and soda consumption uses about 200 billion aluminium cans every year. This is 6,700 cans every second – enough to go around the planet every 17 hours. It takes more energy to mine and produce aluminium bauxite than any other metal. Producing aluminium from recycled cans takes much less energy than is needed to produce new aluminium.

Ginny wants to see her fellow Bahamians adopt recycling and environmental consciousness as a way of life: “Glass shouldn’t go into the landfill either. Tires should be recycled, not thrown away. They can be used in road making, as adding them makes the roads last longer. The Ministry of Agriculture has chickens to donate. You could build a chicken coop and feed them all the vegetable clippings from your food preparation.”

During this COVID-19 pandemic when kids cannot collect cans together at school like they used to. So, Ginny is encouraging community leaders to take a stand and help the kids collect cans. 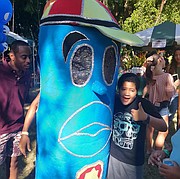 Stan the Can shows up at events to encourage kids to support Cans for Kids.

Churches and businesses all could make it a point to separate their waste for this worthy cause. Cans can be dropped off at the Bahamas Humane Society, Ardastra Gardens, the Bahamas National Trust on Village Road, and the New Providence Community Center on Blake Road. Parents can help their children visit Cans for Kids on social media. St Thomas Moore School has managed to keep students collecting cans by hosting a competition, and Kai Bastian and his grandmother collected nearly 3,000 cans to win the competition.

Ginny has high hopes that the pandemic will not slow down the drive to clean up the Bahamas. Maybe people will pay more attention to their environment with more time on their hands. It seems as if people are being forced back to a simpler time, one that reminds Ginny of her days growing up in the Bahamas when community and culture were bright, creating the pulse of Bahamian life. She remembers a freer life, noting that the country was a vibrant, livelier place. She loves her country and continues her passion to clean up her home, setting an example for her son and daughter, and now her 11-month-old grandson, with hopes that they will also be good custodians of this precious planet.

Aluminium cans can be recycled over and over as the material is not weakened or compromised by the process. Ninety-nine per cent of all beer cans and 95 per cent of all soda pop cans are made from aluminium. It takes only five per cent of the energy to recycle aluminium that it takes to produce it from Bauxite, its raw source! Aluminium cools more quickly than any other drink package, which cuts down on energy used by reducing refrigeration costs. It takes approximately 48,000 cans to produce one ton of recycled aluminium.

Cans for Kids has a limited number of indoor use receptacles suitable for a classroom, shed, garage, office lunch room or behind a bar or in a restaurant kitchen. These may be borrowed or purchased. If you would like to implement this programme at your school, workplace, residence or organisation, please contact Cans for Kids at www.cansforkidsbahamas.info, email cansforkidsbahamaislands@yahoo.com, or call 361-7510 or 812-CANS (2267).

I carry my aluminum cans to BHS depot for the last five years, Recycling should be widespread in this country.

Recycling is a part of the process of solid waste management.A lot of items that goes to the public dump can be recycled.But as usual,sensible progressive ideas take years to be implemented in this country.See the uproar with the ban of plastic bags earlier in the year.