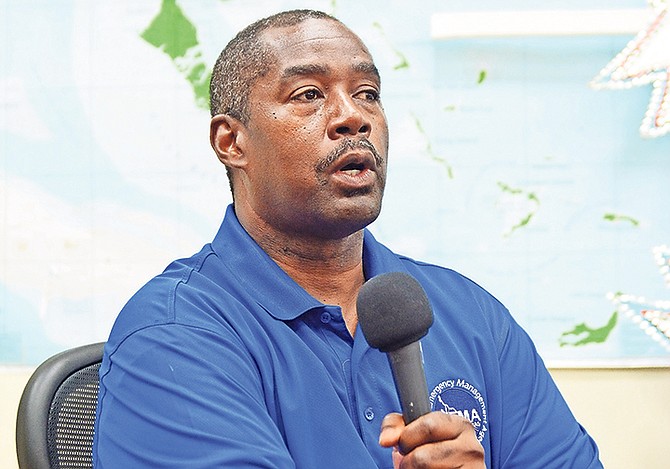 THE director of the National Emergency Management Agency said Bahamians should thank God for small mercies after Hurricane Isaias skirted through the country without leaving any major damage in its wake.

Captain Stephen Russell said thankfully no injuries were reported and no lives were lost.

“We are all grateful for the outcome of the Category One storm as it passed through the entire archipelago,” Captain Russell said. “We had some challenges in certain areas, and definitely down in the Acklins area there is extensive flooding in some areas. Some settlements there are not passable because of the water level.

“In Grand Bahama they had extensive flooding throughout the island. We are grateful that no one reported (being) injured and there were no fatalities. I did an over pass with the prime minister and the team yesterday over the Andros area and Bimini, as best as we could approach, and the Berry Islands. We are generally pleased with what we saw from an aerial stand point. Likewise the reports we are getting from technical officers in the Ministry of Works and Social Services — the islands fared well.”

Captain Russell warned that Bahamians should not drop their guards as the hurricane season is in no way over. He said residents should continue to prepare for any system that might hit the country.

“Again, we still have not approached the peak of the hurricane season yet,” he said. “So we still have to remain on guard and where we need to strengthen our systems, we need to go ahead and strengthen them and where persons have not been preparing, we urge them to rush to complete their preparedness because we never know what is ahead for us in this hurricane season. Generally I think we should be grateful for small mercies that we have seen.”

Trevor Ferguson in Grand Bahama said that, in his opinion, flooding on that island was minor.

“Flooding was minor and mainly along the south coast,” Mr Ferguson explained. “The inland flooding was attributed to canals swelling and high tide. Most of the rain came last night after the storm began to move away.

“Grand Bahama Power kept the power on until about early morning yesterday then poof, almost island wide, it went out. But, we understand it was due to difficulties related to work around damage from Dorian. The water company also shuts down when power is lost and this was also because of work from last year.”

Shawn Roberts in Sandy Point, Abaco, said while he had not heard about any major issues with other settlements, he can safely say that Sandy Point fared well during Hurricane Isaias.

“From my experience we had slight tropical storm breeze and heavy showers for a very short period,” Mr Roberts said. “Most of Saturday and Sunday we had good, enjoyable breeze. There was no flooding, thank God.

“I heard nothing. I don’t think we had the wind for it. I guess I am not 100 percent sure of other settlements although sounds like everyone was okay, but as for us we were okay.”

Although no major damage was reported in New Providence, some people still did not have power restored to their homes up to press time.