Face To Face: Fighting The Odds Since Infancy, Mj Keeps Smiling - And Winning 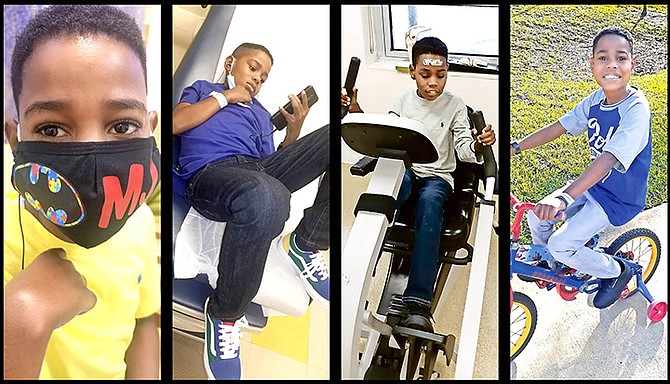 While many are facing tough times due to the pandemic, there are those whose struggles are exacerbated by medical issues and the subsequent cost of getting proper care. That’s the fight that Michelo McKenzie Sr must overcome for the sake of his son, Michelo Jr.

Eleven-year-old MJ has been battling illness since infancy and has been in and out of the hospital for most of his life. He was diagnosed with pneumococcal meningitis and he has sickle cell anaemia. He has surprised doctors time and time again, defying the odds stacked against him. Maybe it has something to do with his larger-than-life personality. He is full of smiles and laughter and he loves music - especially gospel - and enjoys playing his guitar.

Despite every obstacle to his health, MJ is a happy boy with a bright future ahead of him, maybe even as a preacher, because he loves to mimic the preachers and share a good word. This is why his father, affectionately called “Mich”, is doing everything he can to keep up with his son’s medical bills and keep his family afloat during one our world’s toughest crises.

When MJ was an infant, Mich and his wife took their baby for a routine doctor’s visit along with his scheduled vaccination. MJ developed a fever and it became so high that his parents took him to the Rand Memorial Hospital, Grand Bahama. He was immediately admitted to hospital. MJ was in hospital for 25 days and in that space of time, he lost his vision and mobility on the left side of his body.

“During that time, MJ had four doctors in the hospital who were treating him and trying to fight this bad pneumonia infection,” Mich recalls.

“On the 22nd day, the fever finally started to break and come down from 104°. The Department of Social Services assisted in us travelling to the United States for MJ to be seen by a neurologist because of the scarring and damages to his brain. He was seen by Dr Michael Grossman who at the time had over 55 years experience in neurology.

“MJ was in bad shape at the time when he was seen by Dr Michael Grossman and he couldn’t help us because MJ had to get a lot of tests done and we didn’t have insurance coverage. He had to get a Cat Scan, MRI on his brain, and he had to be sedated because he was still an infant. The only way he could have gotten the medical attention he needed was to go to the hospital. So, my wife and I decided that we would take him to the emergency room. We were referred to Broward General and that is where we took MJ.

“When we arrived at Broward General, MJ was seen by Dr Rodriguez and her staff. He was having a seizure when he got admitted and the neurologist and neurosurgeon were paged right away. It was Dr Stoll, MJ’s assigned neurologist who informed us that MJ in fact had pneumococcal meningitis and he was suffering from hydrocephalus, or excessive fluids to the brain. MJ had to have fluids drawn from his brain and he had to get brain surgery to implant a VP Shunt to drain the fluids out. The Shunt was successfully implanted but MJ’s body started to reject the foreign object that was placed into his brain.

MJ with his father, Mich.

“After the second day in ICU, we were informed that MJ had sickle cell anaemia. This was a shock because MJ did all of his tests via private and public clinic and nobody told us this. My wife was tested and she always knew she was anaemic but I never got tested. The type of sickle cell disease that he has, they told us both parents have to be anaemic.”

MJ spent just over three weeks in Broward General before he was discharged. He then had to receive occupational therapy, speech therapy and physical therapy. Today, MJ is still receiving treatment at the Haematology Department at Broward General and is still being seen by his doctors, neurologists, haematologist, paediatrician, therapists and analagists. His mother has not had the opportunity to work as she must constantly travel with her son and meet his many appointment dates. He requires special care as he has a host of allergies - even major changes in weather could send him into an episode.

“MJ is now 11 and still battling issues with this painful sickle cell disease but he is coming along great. My wife has given up her life and had to make the sacrifice to be there for our son. He is in her care and she has truly done a wonderful job in his upbringing and welfare. In past 10 years, MJ has had three more brain surgeries and has multiple seizures but through it all, it’s the grace of God that has always kept him well.”

MJ went from partial paralysis to mobility. He can see well, but he is still deaf in his left ear. He continues to show marked improvements that impress his doctors and give his parents encouragement that he will be able to be all he wants to be one day.

Mich has made every sacrifice necessary for his family. He knows what it is to have the power cut off for months at a time and to go hungry for his son. He has sold valuable assets to pay mounting medical bills. But this schoolmate of mine is always positive and upbeat. He greets our class WhatsApp chat with motivational words and scripture verses every day. I have personally seen him give his last and share without a second thought. He is one of those people who is a friend to all with a heart of gold.

Living in the nation’s second city after Hurricane Dorian and during a pandemic makes things even more difficult. He says morale is low and hopelessness is rising as the island nears 30 days of lockdown. Mich called Grand Bahama ‘the forgotten city’. He believes that disillusionment will continue to grow unless the government puts intentional focus on saving it. 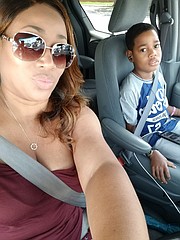 MJ travelling with his mother.

“Everyone is holding up their hands looking to the sky saying ‘why, Lord, why’ because they have been trying to recover since 2004 when Hurricanes Frances and Jeanne hit,” he explained.

“Then Hurricane Dorian was devastating for us, and it feels like people are more focused on Abaco. But we got hit hard here, too, and that was followed by the COVID-19 pandemic.

“The government must realise that people are hurting everywhere and must make sure that if nothing else, people can receive NIB and Social Service assistance on time. It is chaotic, trying to go to NIB and Social Services every week to see if checks have been distributed as yet, and it’s like a waste of time. To add to that, we are now on total lockdown. We don’t mind the lockdown in that it is important to protect the health and safety of the people, but we need the support and financial assistance of the government. Some people haven’t received their first NIB cheque yet.

“I got a lot of runaround because they were saying my contributions were inconsistent. I had to ask them what about my ten or so years at the Freeport Container Port. I got hurt and had to stop working in 2015. In 2018, I got hired back as a temporary worker, as a forklift operator. Whenever the ships come to the port and go on dry dock for repairs, the company calls us in to do the repairs. We could work six months straight, but sometimes it was two months on, six weeks off. What are we supposed to do if there aren’t a lot of jobs available and this is what we have to take? The government needs to relax the red tape a bit and make considerations for people. We have bills to pay and children to feed. You have people who are trying to figure out where they will live because they cannot pay the rent. Some people are talking about going to other islands to look for work.

“The government needs to leave all this red tape because people need to survive,” he said. “Everyone is like ‘what do we have to do’ and ‘who do we have to turn to’. Everyone is just talking about Abaco, but don’t forget Grand Bahama. Things are bad here in Grand Bahama for many people, but not for everyone. Every day I just thank God, because every day there is still hope and one day, this too shall pass.”

Mich has taken on entrepreneurial pursuits to make ends meet. He says he believes in doing a good deed every day: “The only way we are going to survive this - we have to look out for one another. Some people feel like by taking care of their family and kids they are doing what God told them. No, it beyond just you. You have to go out there and help others. If your neighbor doesn’t have and you have, share, because one day it could be you.”