Insight: Maybe Now You’Ll Understand - A Little Taste Of Dictatorship Shows What Generations Of ‘Others’ Have Endured

Loftus Roker’s infamous “reign of terror” as Immigration Minister in the 1980s is largely responsible for cementing in the minds of average Bahamians the idea that Haitians and people of Haitian descent are second class citizens – actually little better than vermin – and underserving of the same rights as everyone else.

Foreigners were increasingly made scapegoats for the problems of a newly independent Bahamas and few were willing to speak out against the degrading, inhumane and unconstitutional way in which Haitians in particular were being treated. Many Bahamians openly and enthusiastically supported not only Roker’s brutal tactics against Haitians, but also the increasing hatred with which all manner of minority groups and marginalised individuals were regarded.

I remember in the 1980s, one small, courageous group of College of the Bahamas students did stand up against this evil being perpetrated upon the most vulnerable in our midst, and were arrested and marched to court for their trouble. They, along with the founders of the Grand Bahama Human Rights Association, including myself, Joseph Darville, Darcy Ryan and others, were in the extreme minority. Most Bahamians, feeling their own rights were secured by the new constitution, were happy to look the other way and have continued to do so for the last 40 years. 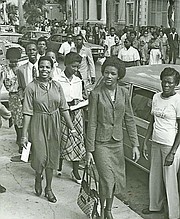 A group of College of the Bahamas students on their way to court in the early 1980s for protesting the treatment of Haitians. The Magistrate dropped the charges.

But, as the saying goes, “Who feels it knows,” and now the chickens are coming home to roost. Amid the constantly extended COVID-inspired Emergency Orders, rolling lockdowns and fear of contact with our fellow man, Bahamian citizens are feeling what it is like NOT to have certain human or constitutional rights. They are learning what it feels like to be regarded as vermin by those whom they live amongst. A recent voice note circulated by Abaconians, speaking in revulsion and fear of Grand Bahamians arriving in their midst was an uncanny parallel to the language we have used against Haitians and others for decades.

We “born” Bahamians are experiencing just a little taste of what it has been like for victims of political persecution, non-citizens, citizens in waiting, belongers, stateless children and adults, political refugees, migrants, Bahamian citizens or permanent residents of Haitian ethnic origin, the LGBTQ community and so many other groups that have been viewed with disgust, politically victimized, marginalized, neglected and outright targeted for discriminatory and abusive treatment.

All these groups, for decades upon decades, have lived constantly with what we are experiencing just a little bit of today, prohibited from living, working and moving about as they see fit under fear of stigmatization or even arrest and punishment.

This was never a question of law, but rather arbitrary policy, executive excess, negligence, indifference, or a deliberate, intentional failure to observe the laws passed by Parliament and as interpreted by the Judiciary.

In reality, for the last 70 years (in 1963 we began our flirtation with written constitutionally protected rights) and particularly since the late 1960s, The Bahamas has lived in a dictatorship, in all but name. The Westminster model of governance has not been suited to a country like The Bahamas, with a small population, a political environment of tribal politics and a construct where the small number of Members of Parliament are financially hostage to every Prime Minister given that Cabinet is sometimes made up by up to 75 percent hostage Members of Parliament.

So, governance has usually been by political expediency, not the Rule of Law. Often by “policy”, usually by some misconceived, ill thought out, Ministerial Diktat, like Fred Mitchell’s November 2014 immigration policy, issued overnight in the press, without warning or notice, turning peoples’ lives upside down, terrorizing them, threatening them, making them hide in fear of arbitrary State action and reprisals.

At least for Bahamians today, there is some attempt by Parliament and the Executive through Prime Minister Minnis, to justify the extensive deprivation of human and constitutional rights by reliance upon provisions of the constitution which purport to give emergency powers to the Executive. I have been reading with continuing interest, the Olympian debate between Dames Joan Sawyer and Anita Allen. 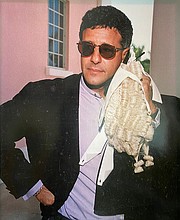 Fred Smith as a young lawyer.

I am reminded of the words of former Prime Minister Christie and I see this pandemic as a “teachable moment“ in the development of our democracy. For too long we have turned a blind eye and accepted that “The Others” - not “Us” - can be dismissively treated inhumanely and degradingly like sub-humans, outlawed and abused with little effective recourse. Money and political power has made Might Right!

The human and constitutional rights of “The Others” are blithely violated by the Executive. Parliament sits mute and judgement after judgement of the Judiciary is simply ignored. “Their” freedom of movement stolen from them; unable to travel between islands or in or out of The Bahamas. Unable to send their children to school or to enjoy the benefits of educational opportunities even though born in The Bahamas. Arrested in mass raids. Their homes invaded without warrants, vandalized and destroyed or whole communities simply bulldozed overnight.

Kidnapped or arrested on the streets, in buses, at work, at the food store, in churches, at the airports. “Their” freedom of expression muzzled. “They” are banished or disappeared into the bowels of Carmichael Concentration Camp or Fox Hell Prison for indefinite detention, sometimes for up to 10 years.

Police, Immigration and Defence Force brutality is the norm. “They” are beaten, tortured, forced to live in overcrowded, unsanitary sub-human conditions. “They” are never taken before a court, never charged for having committed any criminal offence. Those who suffer the luxury of due process are by the thousands young men and women just waiting for trial, kept in the most horrifying and appalling conditions at Fox Hell Prison. “Their” rights trampled upon by arbitrary policy or wilful state institutionalised terrorism, neglect or abuse.

But as it turns out, this has been a double-edged sword. It wasn’t just the rights of “Others” that were being eroded, shaven away by this process, but the rights of us all. We just didn’t notice when it was being visited upon people who were not “Us”. What we are experiencing now, what Bahamians are railing against, is in reality just a little taste of what could happen to any of us, at any time.

I reflect on the apt reference by Dame Sawyer’s reference to Martin Niemöller’s “First they came for the Jews”. The poem is about the cowardice of the German nation during the Nazis’ rise to power and subsequent incremental purging of chosen targets, group after group, until regular Germans themselves became the targets. The lesson is that eventually, the bell always tolls for you.

For decades, we in the human rights movement have been exposing abuse and defending human rights. We have done so on the fundamental premise that IF THE STATE TAKES AWAY ANY ONE PERSON’S RIGHTS, IT IS TAKING AWAY EVERYBODY’S RIGHTS. For this we have been vilified, threatened, abused, subjected to venomous hate speech, political discrimination and ostracism, and accused of all manner of national treachery and wrongdoing. 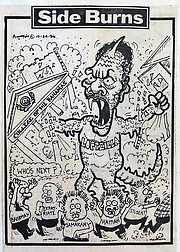 A cartoon from the 1980s portraying infamous Immigration Minister Loftus Roker as “Loftdzilla” over his brutal treatment of Haitians and people of Haitian descent in The Bahamas.

Now ALL Bahamians are feeling just a little of what it’s like to have lived, as I did, under the dictatorship of Pap Doc Duvalier in Haiti. At least currently, in The Bahamas, we only get arrested and jailed if we break curfew. In Haiti the Ton Ton Macoutes or Gendarmes shot you on site! This is why, having been born in Haiti, and having experienced authoritarianism firsthand along with my family, and living under a brutal dictatorship and regime, I have fought proudly, along with my fellow human rights warriors, so hard, going on 43 years now, for the rights of “ALL PERSONS” in The Bahamas, and precisely, as a proud Bahamian, to prevent the country deteriorating into a Haitian-style dictatorship.

Perhaps this little taste of dictatorship will do us some good. This pandemic and its consequences for civil society should be a wake up call to The Bahamas. Hopefully it might even result that, “WE Bahamians” learn to have more empathy, compassion and respect for the rights of “Others”. Hopefully we will have a more visceral appreciation for human rights and a commitment to their preservation and protection for “ALL PERSONS” in the future!

Human rights apply to everyone – not just those who we periodically, conveniently and through politically expedience select to enjoy them, or who have not yet been targeted. Nor should they be taken away from those who are far from sight and therefore far from mind, like those victims of inhumanity at Fox Hell Prison and the Carmichael Concentration Camp [both prisoners and officers as the psychological effects of abuse affect both].

Yes; Wake Up Bahamas! This pandemic and its consequences to civil society should be a wake up call. A little taste of dictatorship may be good for the Bahamian Democratic Soul.