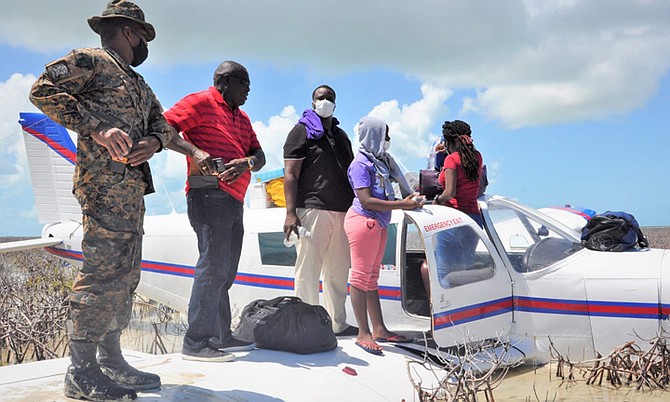 A GROUP from Abaco is lucky to be alive after their small aircraft crashed into water off Treasure Cay yesterday morning just after takeoff.

The Aircraft Accident Investigation Authority is investigating the incident.

The agency said a Piper PA32 Cherokee Six with registration C6-TOY crashed into water after departing the Treasure Cay Airport. All four passengers were uninjured.

According to the aircraft’s pilot, Bishop Cedric Bullard, just after takeoff from the airport, he noticed something was out of sorts with the plane.

“We were going to Nassau to see our families and get back here, but after takeoff we were climbing to an altitude and I observed that we were not climbing, we lost engine pressure,” said Bishop Bullard. “As a minister of the gospel I want to point out why it is important to ask God to order your steps.

“I said to my pastor, ‘Pray that God gives us a safe flight’ and we had a prayer in the plane this morning. We started losing power and we tried to head back to the (runway), because there wasn’t enough altitude. We were able to put this airplane in the swamp in a beautiful area in Abaco.”

Bishop Bullard, who posted a live Facebook video about the incident, was travelling to New Providence with his son, Timothy Ferguson, one of the pastors from his church, Rev LaTroy Russell and Russell’s daughter, a medical school student. The bishop thanked God they are all alive and uninjured.

“I want to say to you to always put God first,” Bishop Bullard continued. “The Bible says in all your ways acknowledge Christ and he will direct your path. Do that! This could have ended differently. We could have been over the deep blue ocean or over the pine yard, but God put us over the swamp.

“The landing was smooth. No one was injured. We are here and able to talk to each other and give God thanks. The message in this is not to do a video to show off, but to say God is real and if you serve him and put him first, he will protect you in troubled times.”

The AAIA also confirmed that the Royal Bahamas Defence Force rescued the passengers on board the downed Piper Cherokee aircraft. The agency said investigations into this matter will continue

Abaco is no stranger to aircraft crashes. On August 25, 2001, almost the same date of yesterday’s crash, a Cessna 402 twin-engine light aircraft carrying American singer and actress Aaliyah and part of her entourage crashed just after takeoff from the Marsh Harbour Airport in Abaco. That crash took the lives of the pilot and all eight passengers on board.

On March 26, 2012, then Police Superintendent Paul Rolle, now Commissioner of Police, informed the press of a crash where a single engine Piper aircraft, minutes after taking off from the Treasure Cay Airport, exploded after crashing into some trees a few yards away from the runway.

All four passengers, who were second home owners, were confirmed dead on the scene.

Maybe I'm wrong, but how does a bishop (or his church) get his own personal aircraft? Another article today has the BCC complaining that COVID unemployment is hurting church funding. Maybe, they should consider not paying for personal aircraft, nice cars & large houses for their people. Glad they're safe though.

Glad to see that the pilot in command (PIC) followed training by landing straight ahead and did not attempt the so called impossible turn back toward the runway while below 1,000 feet AGL. Let's hope that those negative virus test documents survived the accident as well.

Blockquote We were going to Nassau to see our families and get back here,

Ah the emergency orders only apply to coconut vendors and the homeless.

Why did god let them crash in the first place. Always a good god reason. And yeah, seems like bishop was serving himself first, his flock second. Maybe that was god's message.

Jesus tell the trapsy people don't worry why the building collapse on the wedding party, worry bout yuh own soul.

In response to BobsyerUncle, do you not remember the late Myles Munroe and the terrible accident in Freeport some years ago? His private jet was carrying out a go around in very limited visibility after a missed approach. However, the aircraft was allowed to descend below minimum descent altitude and struck a crane in the harbour at an altitude of about 200 feet, incredibly low under the circumstances and after the GPWS had sounded.

Yes I do, that's what prompted my post. Something just ain't right with these churches

Da "Bishop" he probly be hacking! 😂 Glad all made it out ok, thank God!

I thought inter island travel required negative Covid test and mandatory quarantine for 14 days. Just wondering were the health protocols were followed at this case?

How and who on Abaco was officially authorised to grant the pilot, flight clearance to take the skies?
We can all be thankful all comrades aboard come out with no loss lives, doesn't it still begs six-strong asks, and exactly what message are they sending out to the hundreds of their fellow Christians who once they set small steps away from their place of residence in search some emergency cash scratch, grocery, water, and medicine found themselves ambushed, by heavily armed soldiers be handcuffed and forcefully thrown against the wall and into a police vehicle, only to be locked-up be held captive by the Central Authority's constabulary, and judges, who cruelly have fined, and some were even jailed after being declared financially destitute.
If you keep doing what is being done then do not become alarmed if the PopoulacesOrdinay at large POAL in large numbers does begin put thousands foots out onto the streets. Nod Once for Yeah, Twice for No?

And Bahamians still donate to these churches and many not all pastors live the good life. Wake up people, religion is a business.

So this pastor bishop with his own private aircraft believes he was saved because he prayed to God. It makes me wonder why Miles did not do the same thing.