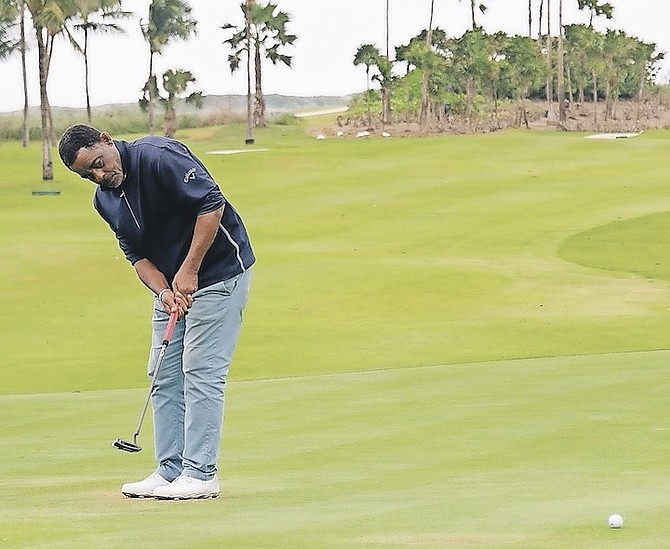 Despite the increase with the wind on the Ocean Club Golf Course on Paradise Island yesterday, Maycock was able to match his performance from day one on Monday to stage out front with a total of 148.

Looking at his consistency over the first two days of competition, Maycock attributed it to his driver.

“My driver has allowed me to hit the majority of the greens,” he said. “Yesterday (Monday), I hit too many, but I was right on target today.”

And as the tournament goes into its final half, Maycock said as long as he can endure the weather, he should be able to hold onto his lead. Not letting him get out of sight or reach, Stuart admitted that he will have to capitalise on the few mistakes he made over the first two days, missing a put here and there. “Each day I messed up on one hole,” he said. “I triple bogeyed 17, so it’s pretty strong with just one hole messed up. I just have to continue to do my best and 17 won’t get me again.”

Based on the conditions, Pratt said he can’t complain about his performance.

“We’ve not been playing any major golf on any major golf course at the professional level in the Bahamas at all, so I consider my game in grand standings,” he stated.

“The next two days, the only thing I need to work on out here is my putting. I didn’t make too much mistakes today, but it was really a putting struggle because I wasn’t used to the greens.”

Lewis, in from Grand Bahama, admitted that he’s not playing as well as he anticipated, but he’s just glad that they have a tournament to get things back on track for the professionals. “So far, I’m just scrapping by, not playing that well. I have too many loop holes out there on the golf course,” Lewis said. “Today, I shot an 80, but I made a quadruple bogey, a triple bogey and a double bogey. That was my whole day summed up in three holes.”

The Grand Bahama resident said although the field was quite small, the competition is still there. “We have some people just going back to work, so we didn’t expect a huge number. As a matter of fact, in professional golf, we don’t have that many numbers to begin with,” he stated.

“We probably were missing about three or four guys, but you have to take the first step in order to start rebuilding.”

For Glenn Pratt, it’s all about getting readjusted to playing golf again. “I expect to improve every day and I’ve done that for the first two days,” he said. “I haven’t done anything outstanding because this is like only the second time that I’ve played for the year.

“It’s important that we continue playing and keeping the association alive, so I’m definitely going to do whatever I can to keep it alive.”

He noted that Maycock has set the pace for them so far in the tournament, but they’re missing players like Keno Turnquest, who is nursing an injury.

“We have to struggle around that and hope that we can manage more golf courses so that we can get to play more regularly,” he said.

“Until then, it’s going to be a struggle for us. We need to be employed and have access to improve our game by playing more tournaments.”

For Cox, he’s just glad to be participating in the tournament. “My game isn’t up to my standard, but I’m still enjoying the experience, enjoying the competition,” Cox said.

“The golf course is providing a good test for everybody, so hopefully I can put in two good rounds and finish strong.”

The former junior national team player said he hopes that more tournaments will follow to improve his game.

“I don’t focus on how many persons are in the tournament, just on who has the lowest score,” he said. “So that is my target because I try to surpass what they are doing.”

The players will all have two more days to improve their scores.