Nib ‘Is Well Established To Continue’ After Director Resignation 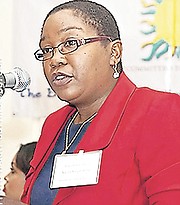 THE day after it was confirmed that Nicola Virgill-Rolle was stepping down as National Insurance Board director, NIB’s chairman assured stakeholders the organisation’s structure and mechanisms were well established to continue operations.

In a brief statement yesterday, NIB chairman Troy Smith said an announcement would come at a later date of Mrs Virgill-Rolle’s replacement.

“Mr Tony Smith, chairman of the National Insurance Board wishes to advise that Dr Nicola Virgill-Rolle has tendered her resignation as director/CEO of NIB,” the statement read.

“Since appointed director in July 2018, Dr Rolle has led the management team and the organisation through two significant periods in its history, namely the impact of Hurricane Dorian in September 2019 and more recently, the COVID-19 pandemic.

“The board extends its gratitude to Dr Rolle for the contribution she has made to NIB during her tenure.

“The chairman also assures stakeholders that the structure and mechanisms within the board are well established to ensure continued operations. An announcement on the appointment of a new director will be made at a later date by the Ministry of the Public Service and National Insurance.”

Yesterday outside Cabinet, National Insurance Board Minister Brensil Rolle thanked Mrs Virgill-Rolle for her service to the board and the Bahamian people.

Asked about her replacement, he said because the situation unfolded quickly, officials at NIB had not begun the process but it was expected to begin in earnest.

“This particular incident developed so quickly. NIB has internally some leadership. Her resignation to us, the contract demands that she gives three months’ notice or alternatively we give three months’ notice so we’re now working though how we’re going to deal with the process going forward.”

However, he said he was unable to give the assurance that this meant Mrs Virgill-Rolle would remain at the board for the next three months.

“I spoke with her yesterday. We will negotiate exactly what we’re going to do, but that’s the condition in the contract.”

According to Mr Rolle, Mrs Virgil-Rolle indicated she made the decision to resign as her engagement with NIB was contractual, whereas her new post at Lyford Cay Foundations was permanent.

Mr Rolle admitted Monday that he did not take Mrs Virgill-Rolle seriously when she revealed in a conversation last Wednesday that she was considering resigning after more than two years as NIB’s director.

Once her decision was made official in writing over the weekend, Mr Rolle said board officials sought to dissuade Mrs Virgill-Rolle, but their efforts were unsuccessful.

Mrs Virgill-Rolle’s resignation was announced on Monday in unusual fashion, with her new employer making public her new post before an official government statement was released.

She will leave NIB to become the next executive director of Lyford Cay Foundations, a release from the foundations said. The release made no mention of her tenure with NIB.

Rebellion is still allowed, and yes, even over the next 90 days whilst still remain' on the PopoulacesPurse's, payroll.
You live in colony of 29 Most Popoulaces Out Islands, 661 Inlets, and Cays and 2390 Rocks. even if you so happens piss-off the office of the prime minister. regardless, it can set the comrade's sister's soul free from the clutches of the 35 House-elected red coat MPs.
Shakehead a quick once for upyeahvote for algorithms when all truths will come out, a slow twice for not be all redcoats. crippled?**