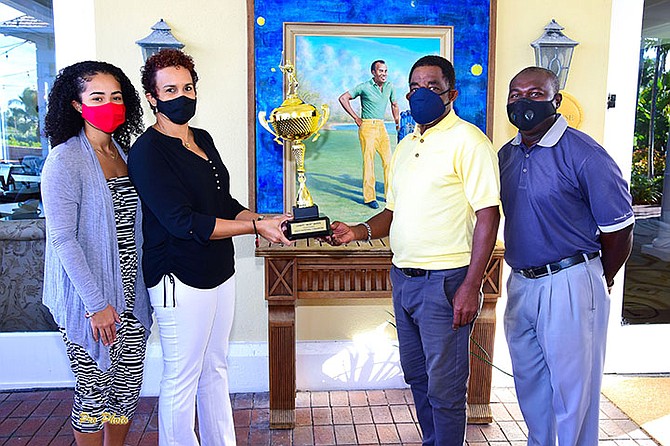 As consistent as he was from day one, Greg Maycock maintained his lead and held on to win the Bahamas Professional Golfers Association’s Leroy ‘Roy’ Bowe Founder BPGA 2020 National Championship title.

At the end of the four days of competition at the Ocean Club on Paradise Island yesterday, Maycock accumulated rounds of 74-74-75-73 for a total score of 296 to cart the prestigious title off to Grand Bahama.

Maycock received it from Bowe’s daughter Christine Bowe Wallace-Whitfield, which could have still gone to Grand Bahama as fellow natives Keathen Stuart was runner-up with 76-76-79- 79 for 303 and Chris Lewis completed the top of the chart in third with 82-80- 77-77 for 316.

The three Grand Bahamians were matched against each other in the last of the two threesomes between the six professional golfers who participated.

Maycock, one of the two veteran players in the tournament that started on Monday, said the performance was just what he needed, considering the fact that he finished fourth in the last BPGA tournament he played here in July. “For today, I could say it was pretty nifty because somewhere in that round, I did some funny stuff,” Maycock said. “I had two double bogeys and so overall for four days, I will take it and just work with that. I’m happy about winning.”

As one of the younger players coming on the scene when the late Bowe was making his exit, Maycock said it was an honour to win the title for the legend of the game in the Bahamas.

“For what he did for the game, I am proud to take this trophy and appreciate it,” he said.

“It was good to win the title in his honour.”

It was a year ago when Maycock last won a tournament that was staged by Ricardo Davis. But he said this one is much sweeter because it comes with the national professional title of the Bahamas.

Stuart, who is now based here at Albany where he is employed, said he was coming for Maycock. But not even the day’s lowest score of even-par-72 yesterday was enough.

“Today, I played much better. I hit the ball more solid. I made a few putts, but it wasn’t as consistent as I wanted it to be,” he said.

“I made a run at it in the first nine, but Greg Maycock held his own and it was a fight to the end. I’m happy with the way I played today.”

Although he had a lot riding on his performance as the president of the BPGA, Lewis said he was just a little too inconsistent with some mental mistakes.

“That happens when you are rusty as far as tournament play is concerned,” he said. “But all in all, I am very encouraged about the event and getting things back as far as the association is concerned.”

Marcus Pratt, who fell short of getting into the top stream of the competition, said his performance was not up to par, but it was a great improvement for him in a professional forum as he gave himself a C average.

“This is the first tournament that I played in for a year and so believe it or not, the rust is knocked off,” he said. “I’m ready for the next one.”

“My preparation now, since the Bahamas Professional Golf Association is in play, we are going to be doing some more stuff. My preparation is mental and my playing capacity is now going to be enhanced because I now know we have more things to do in the association.”

Glenn Pratt, the executive director of the BPGA, said under normal circumstances, he would not have participated because he wasn’t ready to play. “But because of what we are trying to do in the association, I would suffer the humiliation and the pain and the agony,” said Pratt, who has been working behind the scenes trying to get the BPGA re-established.

“It’s not every day you can get up and play with the type of numbers that people say in the newspaper because they don’t reflect the type of golfer that I am or any of us because we don’t play enough. We don’t have any places to play.”

For Cox, it’s the first time playing in and completing a four-day tournament, so he has something to base his future on.

“I hit some good shots out there,” he said. “It just took some adjustments playing in the wind and adjusting to the greens. Hopefully when I play in some more tournaments, I will get some better results.”

Cox, however, commended Maycock for setting the pace and maintaining his position as he putted and improved his game each day.

Lewis said the whole idea was for the BPGA to honour Bowe because he was a “true gentleman” of the sport whom they considered to be their golf hero as Arnold Palmer is to the United States of America.

“Everybody needs to know Mr Bowe as the true hero of professional golf in the Bahamas,” Lewis said. “This is our king of golf.”

One year after he became the Bahamas’ first professional golfer in 1967, Bowe founded the BPGA in 1968. Bowe, who was also an outstanding sloop sailor, died on November 1, 2012 at the age of 78.

“He’s always been there through the golfing days with my dad, so it’s a passion of his, so we love that. We want to see this continue every year.”

Pratt said in addition to hosting the championship this year, they will build a Roy Bowe Hall of Fame for professional golfers and they will lobby for his portrait to be displayed on the Wall of Fame in the Lynden Pindling International Airport along with all of the other national heroes.

Lewis expressed his gratitude, on behalf of the BPGA, to the Ocean Club, for allowing them to stage the tournament there this week.

But he said the BPGA will now put its emphasis on trying to get more of its members employed with the more than 10 golf properties in the Bahamas, as outlined in the constitution that Bowe established when he formed the organisation.