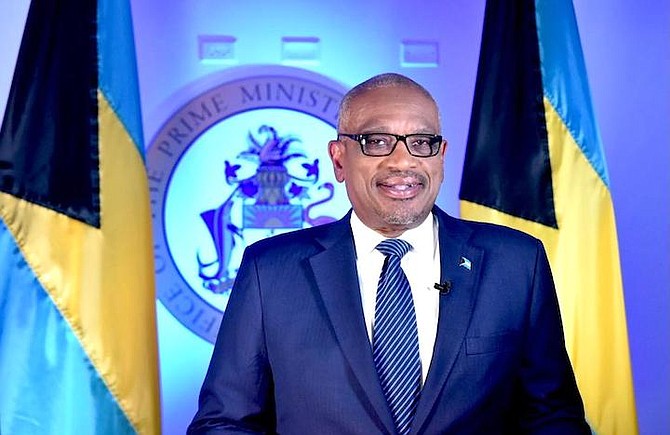 Prime Minister Dr Hubert Minnis has announced that Minister of Works Desmond Bannister will be the next Deputy Prime Minister, taking over from Peter Turnquest who resigned last month.

The Prime Minister also announced the relaxation of a number of COVID-19 measures for the Christmas season.

• From December 24 up to and including January 3, 2021, church services can be held during curfew hours, after 10pm, to accommodate midnight mass, watch-night services and other liturgical services.

• From December 24 up to and including January 3, social gatherings may take place with a maximum of 10 people.

(These provisions apply to New Providence, Abaco, Exuma and Eleuthera.)

Christmas season provisions apply only to islands with the 5am to 10pm curfew and certain other public health protection measures still in place. All other islands may continue as presently provided for in the Emergency Powers Order.

• Effective Monday, December 7, gyms in New Providence and Abaco can resume in accordance with Ministry of Health approved guidelines.

• Effective Monday, December 7, the quarantine for travellers leaving New Providence for the Family Islands will be lifted. The requirement for those travelling from Exuma to the remainder of The Bahamas to take an RT PCR test will be removed. Travellers from New Providence and Grand Bahama to the remainder of The Bahamas will still require an RT PCR test.

The flamingo deep purple today. We all know what that means

This arse is now much too drunk on the power he has wrongfully grabbed by seizing the COVID-19 crisis as an opportunity to tear up the Constitution of The Bahamas. In his warped little mind, Bahamians no longer have the individual rights and liberties guaranteed by the Constitution. He likes to think we need and must grovel for his permission and consent to do just about anything. As I sat on the throne in my bathroom at home this morning attending to important daily business, I couldn't help but wonder when will he try order that I take a dump every other day instead of once a day because his science tells him that would help keep the curve flattened.

As for the appointments of Bannister as DPM and Thompson as minister of state for finance, what a joke!

Anyone else remember the Pindling days? Sure as sh&t didn’t speak your mind publicly if it opposed him. Do we really want that crap again? How difficult is it to take away emergency powers and still protect Bahamians from covid which has a mortality rate around that of the flu ?.... what, is the government we currently have employed too lazy to meet more frequently if needed and come to a consensus on the next moves for this mess. If the other MPs aren’t doing anything I trust we aren’t paying them more than 25% of their salary (SERIOUSLY!) during this BS game the competent authority is playing while his freedoms of course are completely in tact. Come on!!?!

The FnM MPs musseee can’t be bothered to show up to discuss anything - too afraid or stupid to see and acknowledge the precedent being set. Are y’all hoping for full on civil unrest or something?

Please MPs, AG, Governor please !!! get this power drunk PM in check- are there any honest men in parliament?

We the Bahamian people hereby challenge the honourable PM to relinquish his emergency powers voluntarily no later than December 31st 2020 and prove that it truly is Better in the Bahamas!

My Comrades, sister time, she has reached the point for when we most learned constitutional schoolers go back to read exactly and precisely, what was it that our colony's constitution's writers had in mind as a form of challenge, if and should 35 self-serving House-elected redcoat MPs, would ever take control over we colony's governance instruments. Shakehead a quick once for upyeahvote, a slow twice for not?

Thank you for permitting me some limited freedom your majesty.

Thank you Mr. Prime Minister. Your guidance and decision making leave your constituents and the average person in the street with the utmost confidence that the Bahamas is headed towards prosperity.

Mr. Prime Minister we have to be grateful for your wise and sagacious leadership. Were it not for you and the FNM one would be scared to think where we would be during these crises that you have had to lead us through.

We would expect the PLP Ministers profiting from the crisis. Mr. Christie being stuck in an indecisive mode. Mr. Mitchell more concerned with needs of His Husband. And the story would have continued with the pillaging of our nation’s coffers.

Everyday I give thanks to the Almighty for you. Please continue full speed ahead. Please do not let your detractors upset you. Your decisions are based on scientific best practices. Your leadership is guided by morality and wisdom. And the members of your Cabinet are all aware that they MUST follow the highest standards of probity.

Prima Minister should definitely stay the course as PM just not as King!

and the average person in the street ,

WHO GOT THERE BECAUSE THEY LOST THEIR JOB AND WERE EVICTED... ...

Damn bro. Next time try to get the taint! Push that tongue all the way back...

Remember when there used to be a difference between the FNM and PLP?

Desmond Bannister as DPM is not disturbing. DPM has no power to do anything, it’s just a political title. However, Kwasi Thompson in finance is disturbing and shows that the PM is not reading the room. While he seems nice enough, I don’t take him serious on any level and has the person in charge of GB development - on govt side - he really has nothing to show. But who am I... maybe he’ll be impressive.

The only thing impressive about Kwasi is the humongous size of his bulging eyes as he tells one lie after another to the public.

This country finds itself in a peculiar situation as the PM attempts to relax some of the covid emergency orders and allow Bahamians to celebrate with some normalcy, their most festive season of the year. And after almost 20 months of lockdowns and curfews and other restrictions. Many will welcome these restrictions with open arms. Some may even get caught up and go overboard in their celebrations and throw all caution to the wind and carry on as it corona no longer exists. But hopefully this will not be too much the case. This is also the week that the country will see the effects, if any, of the thousands of Bahamians who traveled to Florida and beyond, to other parts of the United Sartes and the world, for that matter. As well as the number of tourists who were also allowed to enter this country. With the Christmas holidays a mere two weeks away, no one wants a lockdown or even curfews. Though many will be celebrating the holidays with great financial restraints and they have not worked since March. Others are still just barely working. And many businesses are counting on holiday sales being sufficient enough to allow them to continue to operate in the new year.

Having Kwasi as Minister of Finance means no controls. He is a "yes" man.

Sad to see that the PM is filling key positions with people who won't challenge him or provide him with an alternative world view. That, I'm afraid, is a recipe for a one term administration. A leader who falls into this trap ends up being cut off from reality - just like the man child President to the north.

the weird thing is the guardian has this same creepy photo. wuth the purple flamingo and everything. This must be the Bahamian version of the intl sign of distress. Alerting the world that we've been taken over by hostile forces and asking anyone in close proximity to come and rescue us