‘Bahamas Could Be Held Liable In Us For Oil Spill’ 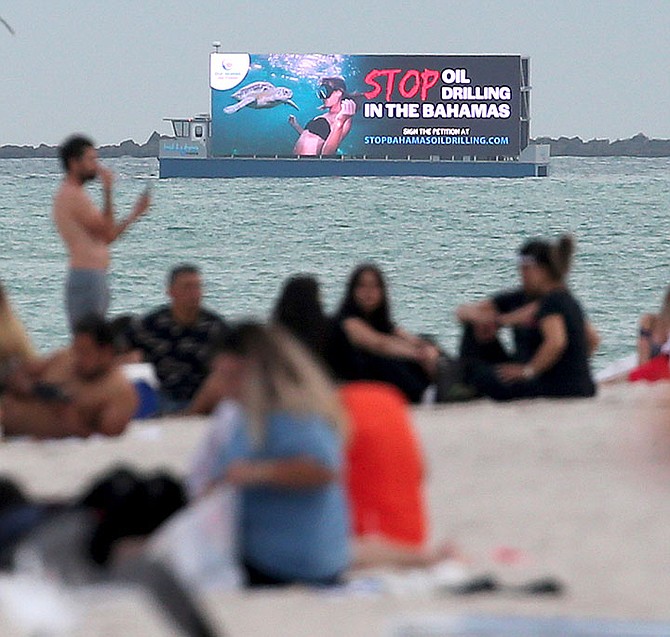 OIL activists took their protests over drilling in The Bahamas to Miami - with a billboard on a barge off the shore of Miami Beach. The move comes amid new claims that The Bahamas could be held liable in US courts for any oil spillage in Bahamian waters. Photo: Logan Fazio

ACTIVISTS from the Only One conservation platform are calling on Prime Minister Dr Hubert Minnis to put a stop to proposed oil exploration, saying The Bahamas can be made liable in US courts should some form of spillage occur.

The Only One platform was founded in 2019 by Blue Sphere Foundation, Lonely Whale, and SeaLegacy organisations. It is committed to harnessing the power of media and technology to create and amplify stories that inspire action to protect the ocean, the planet, and each other.

The organisation erected an e-billboard on a boat which patrolled a beach in Miami recently which reads: “Stop oil drilling in The Bahamas. Sign the petition at stopbahamasoildrilling.com.”

The website has a statement on the proposed oil exploration by Bahamas Petroleum Company, pushing viewers to sign the petition with a message for Dr Minnis.

“We are at a pivotal point in Bahamian history,” the statement read. “The Bahamas Petroleum Company (BPC) has announced its intention to begin offshore oil drilling in our pristine waters in a matter of months. Prime Minister Hubert Minnis has one last chance to protect our nation’s economy and precious natural resources from the devastating ravages of oil pollution before it is too late.

“We ask you to join us in this urgent petition asking the prime minister to cancel all existing oil exploration licenses, reject all proposed renewals and impose a permanent ban on fossil fuel exploration anywhere within our maritime borders.”

The statement noted that this is the 10th anniversary of the Deepwater Horizon disaster, which dumped nearly 200 million gallons of oil into the Gulf of Mexico, fouled 16,000 miles of coastline along five US states, utterly destroyed fisheries and caused an unprecedented and as yet untold level of damage to marine life.

“The Deepwater Horizon rig was an exploratory well, just like the one BPC intends to drill,” said the statement. “Even a partial repeat of that disaster would devastate our tourism, commercial fishing, diving, and marine recreation industries. Tourism alone generates 50 percent of our gross domestic product, while these other industries are vital to the survival of many far-flung communities. Simply put, drilling threatens our very way of life.”

The statement emphasised that any environmental damage to the US coast also exposes the Bahamas to the very real threat of massive liability actions in US courts.

“Those affected could also bring The Bahamas before international courts where our reputation would be publicly tarnished for all to see,” the activists said.

“Considering the swiftness and massive reach of the Gulf Stream and its close proximity to BPC’s proposed drilling site, the possible range of environmental devastation along the US coastline – and therefore the potential liability – is beyond calculation.”

BPC plans to drill an exploratory oil well in waters 90 miles west of Andros on December 15.

Only an idiot government would even contemplate ANY form of drilling for oil, exploratory or otherwise, in our Bahamas. This government has been guilty of so many travesties during its pathetic tenure, we can only hope and pray that it will see the light and stop this proposed madness.

But still not even a peep from Minnis as public anger grows.

Nope, not a word from Minnis, nor any of our other well educated Ministers.

The plug it with concrete and apply for a production license.

Say the Bahamas determines "this is all just too risky" and "hey, maybe stopping climate change is good"

But its plugged with concrete...

Which will not last forever in the deep sea

So you find oil, and it is coming up one way or the other via drilling or a concrete crack or leak in time (lot of pressure down there)

So this is all a very bad idea and commits the Bahamas 100% to either oil disaster in time or commercial drilling if you were to find oil with no real room left for anyone to debate the wisdom of oil drilling or not. Its highly coercive to do it this way, it limits options severely once you find a deposit.

We're quite good at limiting our options.

Like the Bahamas can handle any Oil disaster on the Ocean. Barely could keep the power on and the garbage dump from catching fire. Playing around with the only draw the country has, its beautiful waters, for a few million dollars. Talk about dumb.

You are missing the bigger picture. The international cry-baby organizations won't allow us to defend our country from invaders. Immigration has insufficient resources and authority to enforce laws limiting jobs to Bahamians only, where appropriate. We can't afford to put pictures on work permits. Then only way to defend the Bahamas and keep it for Bahamians, is to destroy the economy completely so that nobody wants to come here.

We have to stay here, because no other country will accept us as refugees. So, in that way, the Bahamas will be kept for Bahamians - which is a good thing.

"...and caused an unprecedented and as yet untold level of damage to marine life." How come it's as yet untold? Could there simply be nothing to tell?

My goodness. Why so much negativity? Look on the positive side of this issue. We need to diversify our economy. It is dependence on tourism that has put us in the present crisis.

How many oil spills do you hear about in Norway related to drilling in the North Sea? Zero.

We will use the state of the art technologies to reduce the risk of spillage. The quantity of oil and gas in our territorial waters would transform our nation for all time to come. Please do not let the naysayers and the unbelievers try to put negativity in your minds concerning this issue of oil. Let’s go for it. Full speed ahead.

"We will use...........?." Who are you, Topdude? Did you notice that the world is in crisis? Because of tourism? Get a slight grip on reality, dude. The intelligent world has agreed that we need to move away from oil. Those, like you are stuck in the information of last century. A true leader.

Norway has lots of spills so has the North Sea, all oil drilling rigs spill oil.... all the time, it goes with the territory.

Norway doesn't have "lots of spills", nor do other countries in the North Sea. The record over 50 years is excellent, even in a turbulent environment. Much has been learned and those best practices will be applied in the Bahamas. Until Norway found oil it was a relatively poor nation of fishermen. Now it is rich, with a sturdy social safety net.

AND Someone just told me a while ago that the so-called oil people/company might just be looking for aragonite which they can easily gather and ship to wherever and thereby make billions of $s... and when they are tired of making money, simply discontinue searching and say that no oil was found... Wow!!!

Not long until we start drilling and pay off the government debt.