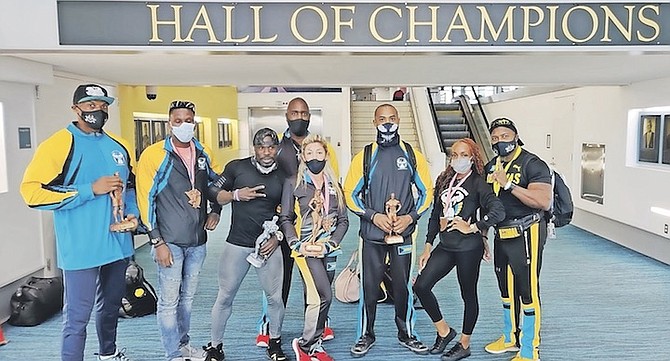 BACK HOME: Team Bahamas yesterday returned home from the 47th Central American and Caribbean Bodybuilding Championships over the weekend in Santo Domingo, Dominican Republic. Joel Stubbs, president of the Bahamas Bodybuilding and Fitness Federation, called it a gutsy performance from the team.

BAHAMAS Bodybuilding and Fitness Federation president Joel Stubbs called it a gutsy performance from Team Bahamas at the 47th Central American and Caribbean Bodybuilding Championships over the weekend in Santo Domingo, Dominican Republic.

The team returned home with a silver medal from Jimmy Norius in the men’s professional division, while his wife Serena Salis Decius-Norius got a bronze in her debut in the Women’s Bikini Short Class, while Wellington Wallace and Kaif ‘Crank’ Young also won bronze in the men’s Physique Tall Class.

Fania Joseph was fifth in the Women’s Bikini, while Jason Johnson and David Dormavil were sixth and seventh respectively in the men’s physique.

The team placed sixth overall out of a field of 13 countries.

Travelling along with Stubbs as officials were Brittany Hamilton, who both attended the congress and served as judges. Nardo Dean was the head coach, assisted by Tim Rolle.

“I want to personally congratulate Team Bahamas on their gutsy performance down in the Dominican Republic this weekend,” Stubbs said. “There were 13 countries that participated together bringing some 213 athletes to compete for honorary medals. First day of competition, Serena Salis Decius-Norius battled and finished third claiming the bronze medal in the Masters Women’s Bikini Fitness.

“In the second day of competition, we started off with David Dormavil in the short class Men’s Physique category where his class displayed some 16 competitors. Seeing this, we knew that he was in for a fight of a lifetime. Unfortunately he was unsuccessful in getting past the elimination round.”

Wellington Wallace, competing in a taller class of the Men’s Physique category, was in his fight as he went on to clinch the bronze, according to Stubbs.

Jason Johnson continued the third leg of the fight for gold but again was met by a large contingent of quality athletes. His aggressive fight landed him in fifth place.

Kaif ‘Crank’ Young, who competed in the tallest class, also had to settle for third place (bronze medal).

On the ladies’ side, Stubbs said the Bahamas had two competitors in the Women’s Bikini Fitness short class where Joseph was fifth and Decius-Norius finished sixth.

“I’m so proud of our team’s finish despite the athletes didn’t get what they went there for,” Stubbs said. “I echoed to them that we must be reminded of our restrictions and obstacles that we faced back home. Our gyms were closed for most of our lockdowns while other countries were afforded gyms being open.

“Nonetheless we know that better days will come for sure as long as they stare at the course and keep their dedication and commitment going. A good consolation is that they will have another chance next year in Bridgetown Barbados at the 48th CAC championship.”

Stubbs thanked the Ministry of Sports for believing in the federation and providing the support they needed, the media for providing the coverage and the rest of the bodybuilding members and fans for their unwavering encouragement of words and comments, knowing it went a long way with them. “Thank you Bahamas for your contribution however given,” he said. “We are expecting 2021 by the grace of God to be a more vibrant sporting year for us all. Season’s greetings.”

Dean also thanked the athletes for going beyond the call of duty to get ready to compete in the championships. “The team did very well. I’m very proud of them,” he said. “With championships set for June next year, we will have to hit the ground running as early as January to get the athletes ready.

“We are always a force to reckon with in the region, so they know that we will be coming back bigger and stronger once we get over this pandemic. So we are looking forward to an even bigger and better team next year.”

With the gyms now reopened, Dean encouraged the competitors to start their training and remember to observe all of the COVID-19 protocols by wearing their masks at all times and practicing social distance.

He noted that while in the Dominican Republic, they were confined to a bubble where they had to take their necessary COVID-19 tests and to sanitise and wear their masks as they roamed from their hotel rooms to the competition venue and back.

“It was so amazing that people still remembered us from the last time we hosted the CAC Championships,” Dean said. “They said it was one of the best ever because of the organisation and how they were treated at Atlantis.”

Dean, a former CAC Championship medallist, also congratulated Norius for the fantastic job in representing the country at the elite pro level. He said Norius was certainly a crowd pleaser.

Stubbs, who turned pro in 2003 but has since retired from active competition, joined Dean in complimenting Norius for his performance, noting that he made the Bahamas very proud on stage as a professional. “We are proud of Jimmy Norius’ performance in the Classic Men’s Physique where he competed and left it all on the stage,” Stubbs said.

“He performed an outstanding musical routine bringing back Michael Jackson’s combination dance patterns. The audience was thrilled and showed just that.”

In looking at his performance, Stubbs said Norius was in excellent condition and well polished.

“When the announcement was made, I sure thought that he was victorious in his category. However, he placed second,” Stubbs pointed out. “I’m overly excited to see our pros carrying on the baton from where I left off, taking the Bahamas to the world.”