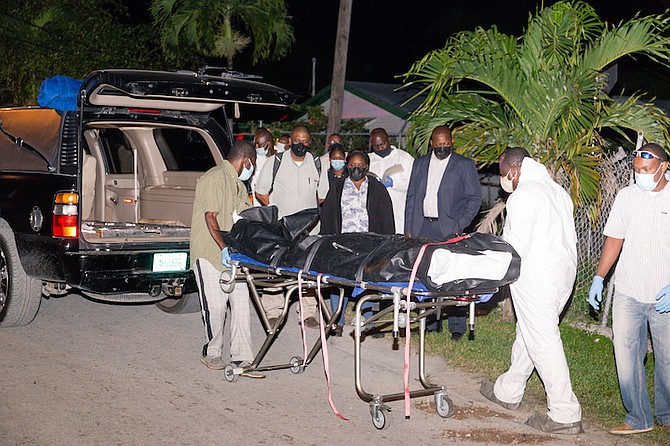 A MAN is dead after he was shot in the Nassau Village area on Tuesday night.

“Around 8.30pm, police received reports of a shooting incident on Forbes St, Nassau Village,” ASP Audley Peters said at the scene. “A unit responded, and on the arrival of the officers, they met a male lying on the ground with apparent gunshot wounds.”

EMS pronounced the man dead at the scene.

“Investigations reveal that a small vehicle was combing the area and it stopped (at) the intersection of Forbes Street and Lawson Avenue,” ASP Peters said. “A male exited the vehicle armed with a firearm and discharged it in the direction of the victim, hitting him.”

The victim appears to be in his 20s and was shot multiple times, he said.

His identity was not known up to press time.

According to the police press liaison officer, there was no information initially suggesting the killing is gang-related or that it is connected to any recent homicides.

One of the victims was shot dead on East Street on Friday night.

Around 9.35pm, officers received reports of a shooting at a business south of Soldier Road.

When they arrived at the scene, they met a large gathering outside the business and were directed to the body of the man on the ground.

Paramedics pronounced the man dead at the scene.

Last Thursday, Alfred Bastian Jr, aka “Halfman”, 33, was fatally wounded during a shooting incident at a home in Cooper’s Terrace.

Police are appealing for anyone with information on these shootings to contact the Criminal Detective Unit at 502-9991 or Crime Stoppers at 328-TIPS.

We fear Corona and shut down the country to combat it, over which we had no control, but look what the young people are doing to each other. Gunning down and killing each other in heartless, cold blood? And for what, except out of ignorance! What can be more destructive?

Is it time to introduce mandatory national service? When Pindling brought up the idea many years ago the idea was shot down and Pindling was scorned. But the young people are with war with themselves in this country. Killing one another in cold blood. Put them in national service and let them do good for country and self.