Insight: ‘Police Beat Me And Put Hot Sauce In My Eyes’ 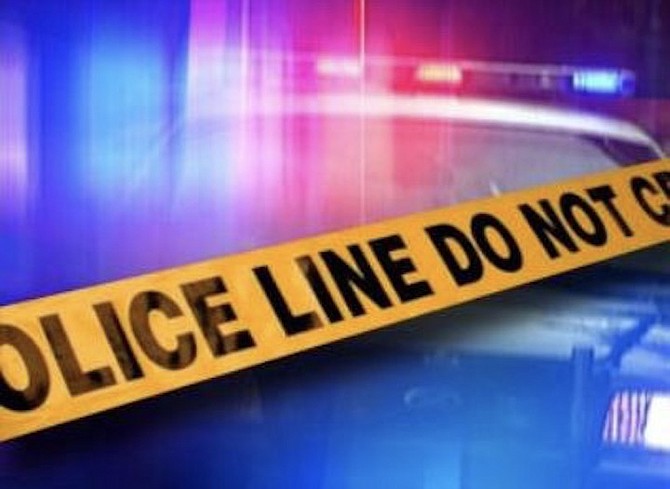 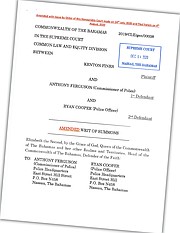 A MAN who alleged police beat him and poured hot sauce in his eyes while in custody for a crime he was never charged with is now seeking compensation for the injuries he sustained.

Kenton Fines claims he was brutalised by officers after police searched his Eleuthera home without a warrant and arrested him in connection with an armed robbery and shooting incident that occurred on the island in 2018.

His counsel, Fred Smith, QC, recently filed a writ of summons in the Supreme Court against former Commissioner of Police Anthony Ferguson and an officer involved in the alleged attack, Ryan Cooper, seeking special, aggravated and exemplary damages for his client, who he contended sustained “traumatic” injuries while in custody.

A copy of the affidavit obtained by The Tribune said that Mr Fines resided in Savannah Sound, Eleuthera at the time of the incident and was employed at a local construction company.

The document claimed that Mr Fines was asleep on the ground in his home around 1am on January 20, 2018, when he was wakened by footsteps, bright lights and a voice exclaiming: “Go around the back!”

The summons claimed the officers then forced another occupant of the house to the floor, before handcuffing him and searching the home without producing a warrant or informing Mr Fines of the reason for the search.

According to the writ, after the officers failed to find anything illegal in the home, they took Mr Fines outside and made him sit in his neighbour’s yard while handcuffed. He screamed out for help, but was unaware that his neighbour had also been detained by an officer.

“The officers returned and demanded that the plaintiff give them the code for his cell phone, but he refused. As a result of his refusal, he was kicked in the throat while the officers repeatedly demanded his cell phone code,” according to the the court documents.

The writ says Mr Fines was then placed into the trunk of a white Jeep Wrangler where he remained for the 45 minute drive to the police station. Once there, officers searched Mr Fines again before processing and placing him in a cell.

“The next day at the police station, the plaintiff noticed a gentleman he knew as ‘Michael’ being brought into the station and taken into a small room. The plaintiff heard Michael hollering and screaming begging the officers not to put the bag on his head as he did not know anything.”

The court documents said this made Mr Fines fear he would be “unlawfully assaulted” next.

After the officers came out of the room with Michael, they took Mr Fines out of his cell and carried him to a small room where they made him sit on the floor, before giving him shackles to put on his feet.

“Another officer then started slapping, punching and kicking the plaintiff in his head, about his body and even in his scrotum. Also, the fish bag was periodically pulled over his head and onto his face limiting his breathing.

“The plaintiff was in extreme pain from the unlawful attack by the officers and from struggling to dodge the unlawful blows. He was fighting to gasp for air and feared he would die. The officer then asked the plaintiff if he knew ‘Grace’, to which he responded he did not. He then left the room and returned with a bottle of Grace hot sauce which baffled the plaintiff.”

The summons said one of the officers then “grabbed” Mr Fines’ head “violently” and poured hot sauce all over his face. He attempted to move, but could not due to the handcuffs and shackles on him.

The officer allegedly poured more hot sauce into the plastic bag before placing it on Mr Fines’ head. The writ claimed while this was being done, one of them continued to physically assault the plaintiff. The writ said Mr Fines eventually became “numb and unresponsive”, although he was accused of “faking it”.

“The fish bag filled with hot sauce was finally taken off of his face,” the court documents read. “The plaintiff, being finally able to breathe, gained the momentum to try and resist any more unlawful attacks against him the best way he could. He began swinging his feet which hit the legs of a desk in the room and eventually was able to kick the door leaving a hole in the same. “At this point, the unrelenting, abusive officers finally ended their unlawful attack on the plaintiff as they said ‘it was getting messy.’”

Mr Fines was then “dragged” to a bathroom in the station where his hands were handcuffed between his legs. A pair of short cargo pants were then placed over his head before officers placed it under a running shower several times.

The writ said this caused the plaintiff’s eyes to become “even more irritated, blurry, watery and filled with pus”. After the “attack” ended, the plaintiff was taken back to his cell. At the time, he claimed he “could barely see and was extremely afraid that he had gone blind” since everything around him was white. His feet were also bleeding because of the shackles.

“On Saturday evening, the plaintiff was again taken to a room that had about 15-20 officers who questioned him about a robbery that had taken place. One of the officers told the plaintiff that an employee of the gas station had been shot and killed. As the plaintiff knew the employee from high school, he responded that he was sorry that had

happened to him but that he was not responsible for the robbery or shooting him.

The writ also says: “On Sunday the officers took the plaintiff back to his house to conduct another unlawful search but did not find anything. One of the officers told him ‘You know you gone to jail right?’ to which the third plaintiff responded, ‘How could I go to jail for something I did not do?’ In reply, the officer stated, ‘plenty innocent people in jail.’”

According to the court filing, when they returned to the station, Mr Fines was fingerprinted and eventually taken to a clinic where his eyes were examined and he was told he had conjunctivitis. He was released on January 22, 2018 without being charged for any offence in connection with his arrest.

“On February 1, 2018 the plaintiff reported the matter to the Police Complaints and Corruption Unit, Police Headquarters, New Providence, Bahamas. The plaintiff’s attorneys (also) wrote the Commissioner of Police Anthony Ferguson on two occasions...to settle the matter amicably with negative results. The plaintiff never got a response to any of the letters and merely got a letter acknowledging receipt to his complaint.”

In the writ, Mr Smith insisted his client did not commit the crime in question as other people were taken into custody, charged and taken before the court, while the plaintiff himself, was never charged with the offence.

He said Mr Fines is seeking compensation because the alleged “hot sauce attack” caused him to suffer from “traumatic conjunctivitis” which will affect him in the “long-term”.

A court hearing into the matter is scheduled to commence in April 2021.

My bro hold their feet to the fire, this is how change and awareness becomes about, and I believe your writ, they need to be held accountable.

Held accountable in what country? Not the Bahamas! The only way they gone learn in drastic actions. Before my mother dead i told her i aint accepting NO BRUTALITY from no cop! Especially if im innocent. You aint gone half kill me, laugh about it and then get to go home and sleep. I dont care if it takes me years to find you...i will. If i can't find the exact culprits then the innocent must suffer for the guilty, but one thing you must know is LIVES will be lost even mine. Yall to easy to catch and bomb to easy to make.

Police brutality, especially at the levels in this country, could NOT exist without condonation by the countries leaders!!