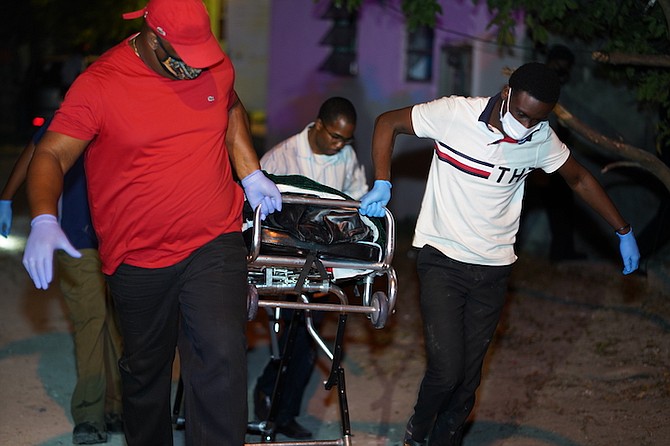 The body is removed from the scene on Wednesday night. Photo: Terrel W Carey/Tribune staff

A MAN was shot dead shortly after he left his Rupert Dean Lane home after 8pm Wednesday night.

Police said the victim appeared to be in his early 20s and was shot multiple times about the body. It appeared the man was accosted in the street and collapsed in a nearby yard.

“Police received reports of a shooting incident that occurred on Rupert Dean Lane shortly after 8pm,” Assistant Superintendent Audley Peters, press liaison officer, said at the scene. “On the arrival of the first responders, they found the body of a male lying on the ground with apparent gunshot wounds. The preliminary facts are that shortly after 8, this male would have left his residence and moments later, family members heard gunshots.

“When they went outside, they met him lying on the ground.”

The victim was pronounced dead at the scene. Details around the shooting were minimal last night.

“At the moment we’re not able to say whether there was a vehicle involved, however there are a number of persons who are assisting police with their investigations at this time,” ASP Peters said.

He said no suspects were in custody up to press time and added there was no evidence to initially suggest the killing was gang or drug-related.

Anyone with information on this incident or any other crime is asked to call police at 502-9991, Crime Stoppers at 328-TIPS or the nearest police station.

Merry Christmas seems like it won’t be so merry merry. RIP