One Death And 35 Cases Over Holiday 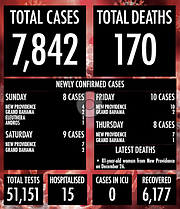 COVID-19 cases have continued to steadily trickle in each day with Ministry of Health officials recording 315 new cases this month.

Over the holiday weekend – Christmas eve to Sunday – 35 new COVID-19 cases were recorded.

That is eight new cases on Sunday – four in New Providence, two in Grand Bahama and one each in Eleuthera and Andros.

On Saturday there were nine newly confirmed cases – seven in the capital and two in Grand Bahama. One additional COVID-19 related death was also confirmed. This was an 81-year-old man who died on December 26, pushing the country’s death toll to 170.

On Christmas Day, ten new cases were reported while eight were recorded on Christmas Eve.

During the first week of this month there were 43 cases, but the week that followed saw 118 positive cases recorded, followed by 74 cases. In the remaining days 80 cases were recorded.

Earlier this month, the country’s top infectious diseases expert again urged Bahamians not to be overly confident or come to the false conclusion that the deadly disease has left the country.

Dr Nikkiah Forbes, director of the National HIV/AIDS and Infectious Disease Programme at the Ministry of Health, reminded people that the number of confirmed cases everywhere is always less than the actual number of infections, adding 40 percent of cases are in asymptomatic carriers.

As these people are still infectious, following health protocols should remain a focus of all, she said.

Yet colony's junior health minister comrade Renward says he goin' leave it up numbers infected and deaded to solve quiz as to how naughtily or nice the natives been over the Christmas and New Year's holidays?
Makes much nervous wonder, should the vaccine dose reach the colony of out islands are the natives be left out of the rollout of many of the promised vaccine doses?
Just cannot make such junior ministerial nonsense up how the good behaving tourists get dine-in whilst natives are denied dining privileges. Shakehead a quick once for upyeahvote, a slow twice for not?

Reports are that the newly mutated strain of the Corona virus, that is said to be more contagious and more deadly, has shown up in the United States as well as South Africa.. However the press cannot always be trusted to be accurate as, on several occasions, they have reported mass outbreaks of COVID-19 in China and these reports were proven to be false. China seems to be doing a better job than most countries in containing the virus and keeping infected people out of its borders. But what will happen if the new strain is, in fact, in the United States? Their health system is already overburdened and some states are reporting a death from Corona every 15 minutes. Can America deal with a strain that spreads more rapidly and causes even more deaths? And the concern is whether or not the vaccines that have been approved will be effective against this new stain. And what steps are The Bahamas taking to keep this new strain out the country and to manage it, should it manage to penetrate the borders. More full lockdowns and increased curfews will be economic suicide as even the most well funded businesses will be challenged and government itself may dig a hole too deep for itself. Hopefully the Corona numbers will remain low and herd immunity will be effective.

There are very few outbreaks in China because their people received the mRNA vaccine via its implantation in grains of rice from January of 2020. Nobody creates a virus that they don't already have the solution too.

Hardly any deaths in China, nor are there hardly any in their plantation known as Africa (where they have all their textile and other factories). Now all China has to do is sit back and wait for the rest of us to die and the scoop up the free land. A brilliant plan - and the US media is not even questioning why the death numbers are so extremely low in China and Africa. Not even one question about it.

This may seem like a crazy thing to do - but it gives me (personally) a feeling of a form of shutdown which I have gotten so used to. It fills a deep rooted urge.

Great, so how many vaccines we have now?

We can't afford the freezers for the first one - but we can do the second one. Don't worry - the IMF will offer to put us in further debt so that we can "afford" it.