Face To Face: A Rollercoaster Ride Of Fame, Despair And Finally Salvation 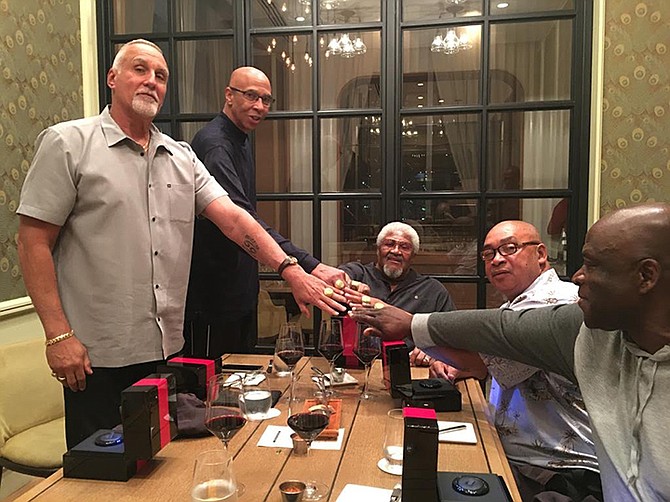 The year was 1973 – the glorious year of Independence for The Bahamas. There was a lot to be proud of. There was such a sense of pride in being Bahamian; having a flag of our own, a national anthem and a pledge. The people of The Bahamas were committed to moving forward, upward and onward together. Bahamians were making their presence felt in the world in many disciplines; among them - athletics.

Bahamians who recall this time in our nation’s history know the story of The Jackson Five well. There were five teenage boys attending Miami Jackson Senior High School who were the starters on the basketball team, the Generals. Their prowess in the sport was so great that news of them spread through the country, across the United States and the Caribbean. The Miami Jackson Generals were such a force to be reckoned with they were nicknamed The Jackson Five. They dominated the basketball court – and four of them were Bahamians.

By the time they came home to see the black, aquamarine and gold flag hoisted for the first time on July 10, 1973, they received a heroes’ welcome. The four teenagers included Mychal “Sweetbells” Thompson, Osborne “Goose” Lockhart, Cecil Rose, and the subject of today’s Face to Face – Charles “Old Cowheeler” Thompson. The fifth star team member was Julio Gonzalez, a Cuban refugee.

“The Jackson Five was one of the great teams in the country (USA) of all time,” said coach Jake Caldwell, who led the Jackson Generals and is noted as one of Florida’s most successful basketball coaches.

Coach Caldwell made his way to Nassau in 1972 to recruit Charles Thompson. He was already coaching Bahamian youths Osborne Lockhart and Copie Conyers who enrolled in the school a year earlier. Cecil Rose went over that summer to hang with them. They ended up telling coach Caldwell about Charles because he had the height and the girth to play basketball.

Back then, the schooling system in The Bahamas went by “forms” and not “grades”. Charles was 15 and he had already completed form 5, which signalled the end of his high school career at Jordan Prince William in Nassau. However, in America he could continue high school and graduate at the age of 18. Coach Caldwell invited Charles to come to Miami Jackson. He also found the gifted Mychal Thompson at Queen’s College and together, they enrolled in Miami Jackson by the fall.

In their junior year, The Jackson Five had 24 wins and just three losses. During the year of Independence, their success was being reported in sports news throughout the region, and Bahamians were proud. By 1974, the Generals had 33 wins and no losses, and they won the state championships. The boys received a plethora of trophies and accolades, and received commendations from the county and the mayor. To date, they are still the most highly recognised high school basketball team to ever play in the state of Florida. 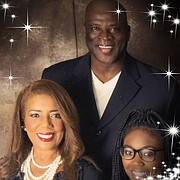 Apostle Charles Thompson with his wife Francina and daughter Charmayne.

Charles performed well at the University of Houston. He and Cecil were naturally starters on the basketball team there. They were in the top ten in terms of scorers at the school for many years and even now, are still in the top 15. At one point, Charles was the 8th top scorer of all time at UH. As seniors, the Bahamian pair made All-Conference. All four Jackson Five all-stars from The Bahamas successfully graduated from university, then eventually went on to be drafted by the NBA. Mychal Thompson made it furthest. He became the first basketball athlete from Miami to become the first overall draft pick, which happened during the 1978 draft. He played 14 seasons in the NBA for the Portland Trail Blazers, San Antonio Spurs and eventually the Los Angeles Lakers, where his team won two NBA Championships.

Charles ended up being drafted by the Phoenix Suns in the 6th round. He didn’t make it to the final round, but he played professional basketball all around the world. He played in several countries including Italy, the Philippines, Puerto Rico and Venezuela. Charles also played in the CBA (Continental Basketball League) and he was leading the league in scoring. He was scheduled to join Kansas City’s team but the same year, he ended up suffering a back injury. After the injury, Charles decided to returned to the University of Houston. There he took up graduate studies while serving as assistant basketball coach.

Once he completed his degree, Charles moved back to Miami where he is still considered a hero in the sport. He entered the Dade County public school system as a teacher. He enjoyed an illustrious career in which he became a mentor to thousands of Florida kids in education and athletics. After more than a decade of teaching, he continued to be promoted and became an administrator. But his life took a devastating turn. He was introduced to drugs and eventually, it took tragic possession over his life.

“Drugs are something I can tell you – as strong as you are, as intelligent as you are, it can take over you,” he shared. “I just couldn’t get a grip on it. I got so desperate on drugs I even tried to commit suicide. I went to 17 different treatment centres. I even went to a homeless treatment centre. I would leave my home and walk the street for drugs. I remember one time things got so bad I ate out of the garbage. I was desperate.

“I had already been to one of the best treatment centres in the United States; it’s in Mississippi and top lawyers and doctors go there for rehab. My roommate was one of the top heart surgeons in the country. The professionals there – they were still not able to keep me off drugs.”

Charles’ wife of 21 years, Francina is a teacher. She met him while he was an administrator in the school system. He was a single man (a divorced father of six) and was living his best life. “I was a supervisor in the job corps,” he said. “It’s a second-chance school where kids come and learn a trade when they fail high school. I was there for eight or nine years. So, I actually had two middle class salaries. I had a nice house with a Lexus and a Blazer in the garage. All my neighbours were white. I was being primed to become a principal and I was one of their best candidates. I had a great life.

“She watched me go from that powerful administrator, her boss, to someone walking the streets with no shoes on.”

He reached a point of despair and hopelessness, but he knew he wanted something more. He wanted to get his life back. He wanted to be back in his children’s lives. It meant everything to him. He made a decision to turn to the Bible. A preacher had given him some scriptures. He looked up the scriptures. They were speaking of deliverance.

“I was studying the scriptures, and I went to God and asked him to deliver me because everything else had failed,” he said. “God had spoken to me before, and for me not listening, I went through four hard years of drug addiction. I was humiliated, embarrassed and fired from both jobs. I went to Him sincerely and I put His word to Him. I said, ‘God, this is what You said in Your word’. I would take it to Him three to four times a day. I picked up a yellow pad. I would break down the scriptures and go back to praying and writing. It was like a job for me. I did it every day for four months and I found all the scriptures on deliverance. I did it because I had nothing else left.”

Nineteen years later, he is now Apostle Charles Thompson and leader of a growing flock in Miami. His church, Genuine Love Ministries is a testament of his walk from trial to triumph. I was able to attend a service recently and his sermon was so real, so inspirational and so moving that it got me up out of my seat, clapping my hands as he shared his testimony with the congregation. Members told me that every week, their pastor is so relatable and so real, without false pretences, that it makes them want to come each week to hear more of God’s word. They confide in him and they trust him, and he shamelessly lets them know about his own mistakes and shortcomings so that they would be confident that they, too, could overcome and make the best of themselves.

“All of the crying and tears, the embarrassment and degradation – everything I went through was for me to be doing this now,” he said. “It was all for me to be able to help people. People come to my church and they are not judged, no matter what they may be going through. People have come to me whom the world said they were done. Three months later, their lives are completely changed for the better and people don’t even recognise them. I get excited about it because it’s a big deal for me. It’s amazing what God has done in my life and is allowing me to do in the lives of others.”

The journey to becoming a pastor included Charles and his wife hosting marriage seminars to share their story and to show and prove that marriages can survive what may seem like insurmountable obstacles. The seminars were wildly successful. He and his wife were attending another church at the time and they were blessed with a daughter, Charmayne. Charles even authored his first book. But, he felt there was an even greater calling on his life. He called his brother in Nassau, Rev Dr William Thompson (former president of the Bahamas National Baptist Council and current vice president of the World Baptist Council) and told him he felt the call to ministry. His brother prayed on it and came back with the word that he should start immediately. On September 12, 2001, Genuine Love Ministries was born after he was ordained by Rev Dr Iris Troy. His big brother travelled to Miami not long after to officially bless him and the church.

Apostle Charles comes from a religious background. He was raised in a “strict, Godly house” by parents Lloyd and Lorana (nee Evans) Thompson. They made sure that church was a “non-negotiation” for their children William, Vernamae, Margaret, Harrison, Rubyann, Charles, Anthony and David.

“What I am doing takes all of me,” said Apostle Charles, who devotes his time to dutifully ministering to his members. “There is a big picture for Genuine Love, and it will impact the world.”