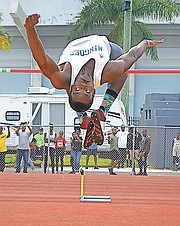 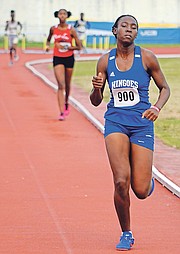 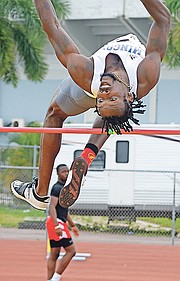 The University of The Bahamas Mingoes won six events at the 17th Star Performers Track and Field Classic over the weekend to open local competition.

“It feels pretty good to clear 2.05 because it shows me that I’m consistent at the 2.05 which gives like 850 points in the decathlon so I’m pretty happy with that. I could have worked on my timing over the bar which could’ve been a little better. I feel like if I improve more on the timing I should higher results.”

Kendrick Thompson tied for second spot with Stoney Duncanson (Leap of Faith) as both cleared 1.90m (6ft 2¾in) with identical knockdowns.

Tyler Gardiner got stuck in the pack in the first lap of the Open Men’s 1500m but pushed out front in the back half of the race to pull off the win in 4:23.94.

“The first quarter I was supposed to get out easy and coach wanted the race to start from the second quarter,” he said, “so I started to pick it up gradually and I made it into the third quarter smoothly. There was a lot of head wind on the front stretch so I started to run out of gas with like 250 meters to go but it still was a good race for me.”

“It was pretty good,” Josey said. “It was better than what I did at Purdue but I appreciate it. I see some more things I need to work on and when I go to practice I know that’s what my coach is going to be drilling to me and hopefully next time I’ll do better.”

She added she needs to focus on her finish if she wants to be competitive. “I have a good start and I have a good mid-distance race,” she said. “But when it comes down to finishing I’m a little weak so I’m ready to try and push more to fix that to be excellent in my event.”

Destiny Pratt and Sierra Sears took the top spots in the Open Women’s 200m. Pratt finished in 26.50 seconds and Sears stopped the clock at 27.86.

In the Open Men’s 400m, Donya Roberts finished 6th in 49.89 seconds in a stacked field that saw Maverick Bowleg (Road Runners) win the event in 48.54 seconds.

Head coach Ednal Rolle said he felt good about his team’s first major local performance this season. “Our athletes had some great performances today considering we are just getting into the full swing of the season,” Rolle said.

“Ken and Kendrick dominated their events and that’s going to set them up for multi-event competition later on in the season. And on the track we had some good times from our athletes. All in all this was a great meet for us.”

The Mingoes are expected to participate in the University of Tampa’s Invitational February 20, 2020 in Tampa, Florida.