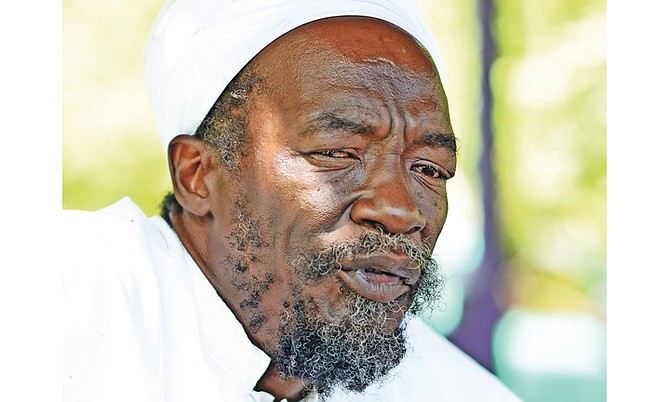 MEMBERS of the Rastafarian community yesterday praised the recommendations made by the Bahamas National Commission on Marijuana to have the drug legalised as a sacrament for Rastafarians, noting the move as a step in the right direction.

Speaking to The Tribune yesterday, head of the Ethiopia Africa Black International Congress (EABIC) Bahamas branch, Priest Rithmond McKinney said the move would represent a sort of freedom for the community, which has suffered longstanding oppression due to members’ sacramental use of the plant.

“You know over the years, for the last 20 something years, we was at the table agitating concerning our sacramental rights and it was being denied over and over and repeatedly,” he told The Tribune.

“We’ve been locked up, marginalised, persecuted and in all negative ways, we’ve been stereotyped so we bear the brunt of this whole issue concerning marijuana and the use of marijuana over the years….so we feel as though some kind of retribution should be followed to the Rasta man.

He said the Rastafarian population in the Bahamas comprises of over 10,000 persons.

To help regulate the drug among the Rastafarian community, the commission has recommended the establishment of a Rastafarian council.

Giving his thoughts on the matter, Priest McKinney said: “Well, of course the Rastafari elders from the church perspective and the wider Rasta community should come together and collaborate and have the best way forward in regulating this cannabis amongst ourselves.”

Meanwhile, expressing her support for marijuana decriminalisation, EABIC member Dionella Thompson said “ the time has come” for country to legalise the drug.

“The time has come. The time is now because we use it,” she said. “I’ve been arrested and charged and gone through all of that, having to pay a fine so for the youth that are coming up, especially for the Rastafarian youth, you don’t want them to go through that.

Their comments to this newspaper came a day after Prime Minister Dr Hubert Minnis tabled the commission’s report in the House of Assembly.

In the report, the commission recommends releasing from prison those convicted for having small amounts of the drug and decriminalising up to one ounce of cannabis for persons 21 and over.

Asked about his thoughts on the matter, Priest McKinney said while Rastafarians support giving those convicted with marijuana a fresh new start at life, the community feels that government should be clearer on exactly what is considered a small amount.

“But, we ask the question, what is the small amount?

“Who all qualified for their records to be expunged? Persons under one ounce or two ounce, under five pounds (or) under ten pounds? In my eyes, a small amount is ten pounds or less to expunge persons records… (so) from a Rasta standpoint, we need to know what is a small amount and so we have to weigh this out properly and not just say small amounts. So that is one of our concerns.”

Speaking on age limit imposed for marijuana possession, Priest McKinney said he strongly believes persons 18 and over should possess the drug instead of 21, as recommended by the commission.

“The commission recommends 21 and above, but I would go with 18 because when you’re 18 you could vote,” he said.

Priest McKinney was also firm that he wants cannabis legalised “across the board” in the country.

“Herbs should be free and legalised and taxed. Where there is a bowl of herb, there is peace and there is love,” he told The Tribune.

“We consider (alcohol) as the most dangerous drug of all. We don’t see cannabis to be a drug, but a healing plant. So, we feel as though that should be totally legalised.”

The commission has not yet taken a view on whether cannabis should be legalised for recreational use, a matter that divided members.

Meanwhile Bahamas Christian Council President Delton Fernander has said that in light of the report’s release, he will form a committee and will map out the way forward later this month when the council meets.

“My staff are bogged down with Ministry of Finance on the budget bills,” Mr Bethel said.

Everybody has an Organisation now huh?

Go to Ethiopia boy if you so badly want to partake is a made up Organisation with that in the name.

Get from around here boy!

If they gonna legalize it they need to legalize it for all - you can't use this made up church bull shitt it's all made up = someone wrote a book and you all are taking it way to literally - legalize it for the medicine and culture and leave it at that.

Not that i want the government involved in my fluckin weed any day but if you gonna do it you do it right by all....

Talk about getting Hail Mary, the Lord be with thee high pass in the spirit?
It was way beyond pay scale reach of a group made up of '25' politically appointed comrade members of a Weed Commission to place themselves in the position to take a stab at speculating about the going on's behind a Rastafarian Weed (Dispensary) Sanctuary? Can't write this, just, can't.

Tax it ! Put a high tax on marijuana use beside medical.we can make some money for the country. People will pay a very tax to smoke it.

Let the dumbing down continue unabated!!!