China Ban May Relax To 14 Days 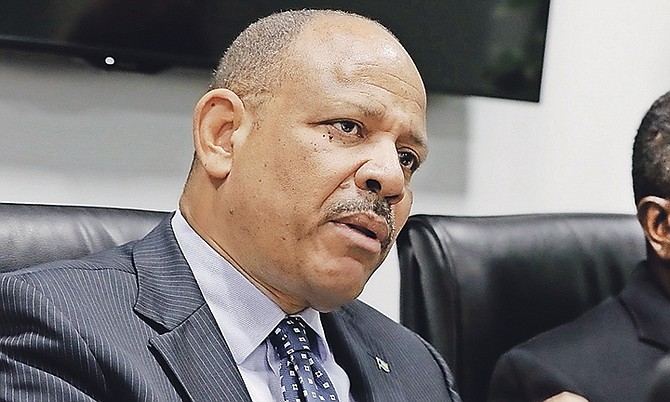 HEALTH Minister Dr Duane Sands said yesterday the government will certainly reconsider a change to the new coronavirus quarantine measures to align The Bahamas with the posture of other countries.

However, the final decision will come from Cabinet, he said, although he did not disclose when it would be discussed in Cabinet. He was contacted after Chinese Ambassador to The Bahamas Huang Qinguo noted in a courtesy call on Friday that the border control and quarantine measures taken by The Bahamas in view of the deadly virus outbreak in China are stricter than other countries.

During the meeting, Mr Qinguo expressed the hope that with health improvements in China, the timeframe surrounding quarantine in The Bahamas will change.

Among border security measures in the wake of the virus outbreak, the Bahamas is denying entry to non-residents who visited China within 20 days of presentation while returning residents will be quarantined for an incubation period of 14 days.

However, Chinese officials want officials to reduce the 20-day stipulation to 14 days.

Mr Qinguo told The Tribune last week China did not support the travel restrictions the Bahamas and other countries have implemented to stop the spread of the virus.

Up to press time the virus’ death toll was 811 with 37,198 confirmed infections, according to China’s National Health Commission.

Asked whether Bahamian officials were set on the measures in place, Dr Sands said: “As we have learned more about the natural history of this organism, I don’t think that we are so frozen in our position.

“We will certainly reconsider a change to align the Bahamas’ posture with most if not all the other countries.

“There is no secret that such measures are not consistent with the measures of either the Chinese government or the World Health Organisation or PAHO for that matter,” Dr Sands also said.

“But what is clear is that every government, every country has the right to do what it feels is necessary to protect the interests of its own citizens particularly given the special peculiar circumstances in their country. In order to comply with the international health regulations 2005, we had to justify why we made the changes that we did and the chief medical officer as the point of contact for international health regulations had to present in writing the justification as to why the Bahamas took the position that it did and the 25 other countries and it maybe more had to do the same thing.”

The justification provided was that the country is an archipelagic nation with multiple borders, making it more challenging for screening and ongoing recovery from Hurricane Dorian, which impacted the health system.

Regarding Friday’s meeting, Dr Sands said Mr Qinguo reiterated the steps the Chinese government is taking to contain the outbreak of the novel coronavirus.

Dr Sands said the ambassador reiterated that his government was sparing nothing to bring the situation under control, with assurances that Bahamians who are in China were being given particular attention to ensure their safety.

Of the 160 Bahamians residing in China, presently five are in Wuhan city, the epicentre of the outbreak, and they are being monitored by the Chinese and the Bahamian Embassy, a press release issued Saturday said.

“During the meeting at the ministry’s offices, the ambassador apprised the minister of measures taken to prevent and control the spread of the virus in and outside of China,” a Ministry of Health statement read.

“The ambassador noted that since the outbreak, the measures taken by the Chinese government exceeded the recommended measures by the World Health Organisation (WHO) in an open and transparent manner. He stated that the epidemic first started in Wuhan city, Hubei province, which is located in central China.

“Information received January 23, 2020 regarding the increase in the number of cases in Wuhan city resulted in a lock down of the movement of persons in and out of Wuhan city. Other neighbouring provinces also instituted similar measures. Persons, who were permitted to travel, were screened and those with fever were prevented from travelling.

“All confirmed cases are being treated and all suspected cases are being quarantined. Stricter measures were taken at the Customs Borders to prevent persons (nationals and non-nationals) from leaving the borders.

“The foreign minister of China sent a task force to Wuhan city to monitor the situation including the well-being of Bahamian students residing in Wuhan city. Food and other supplies are being provided.”

The statement added: “The outbreak in China is improving despite the increase in new cases, as the numbers of suspected cases are decreasing. Further the recovery of persons from the illness is also improving and the government of China is confident that with the warming of the weather, the number of cases will be further decreased.

“Ambassador Huang Qinguo noted that the border control and quarantine measures taken by the Bahamas are stricter than other countries, and hoped that with health improvements in China the period of time for quarantine will move from 20 to 14 days.

“Minister Sands thanked the ambassador for the collaborative meeting and noted that these measures were taken due, in part, to the condition in the country following Hurricane Dorian, and that the health prevention messaging speaks to the 2019 Coronavirus and not the Chinese people.

“The minister also informed that the concerns raised, especially with regard to the period of time for the quarantine, will be discussed with his colleagues.”

So, with one meeting the Chinese are determining the quarantine protocol of the Bahamas? Why am I not surprised!

Our border control and quarantine measures should be strengthened and not relaxed as requested by officials of the ruthless Xi-led communist regime in Red China. The U.S. Center for Disease Control has warned the spread of the new coronavirus will get much worse with the possibility of peak infections not occurring before May or June of this year.

If Hubert Minnis and Duane Sands, as medical doctors, are foolish enough to yield to pressure by Red China for our country to relax its border control and quarantine measures announced thus far in an effort to protect the Bahamian people, then these two medical doctors (Minnis and Sands) will have to bear full responsibility for the deaths caused by the resulting wide spread outbreak of the coronavirus on New Providence Island.

It seems special foreign interests of one kind or another are running our country these days, e.g. the Red Chinese government, the IDB, etc. Our elected officials have become nothing more than puppets of these special foreign interest groups. This is where we find out whether Minnis and Sands have an ounce of care about the health and well-being of the Bahamian people.

NO WAY! Let China try and screw up its own country not ours. They want everything their way. Acceding to their pressure is unacceptable ever.

Keep our boarder/country as safe as possible – we are a small people 400,000 or less – the Chinese are our friends too ‘ but if they have a contagious killer problem – we have to sanction them as anyone else’ until they get a grip on the problem - hopefully!