Realtors Close On Reforms To 'Take It To Another Level' 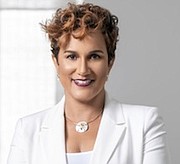 The Bahamas Real Estate Association's (BREA) president says the industry is "almost there" with reforms to its governing Act that are designed to "take it to another level".

Christine Wallace-Whitfield, pictured, told Tribune Business that the proposed changes to the Real Estate (Brokers and Salesman) Act were vital to "tightening up" the law in a way that will best protect BREA's 700-plus members, their clients and an industry that generates millions of dollars annually for Bahamian gross domestic product (GDP).

Pointing out that the Act has not been substantially upgraded since its implementation some 23 years ago, Mrs Wallace-Whitfield said real estate legislation needed to keep pace with changing market conditions as well as evolve in accordance with other laws impacting the sector.

She pointed to the revised Financial Transactions Reporting Act 2018, and the requirement that realtors apply Know Your Customer (KYC) due diligence procedures to clients, as one such change that the real estate industry's main law should account for since it was first passed and enacted in 1995-1996.

Describing the revised Real Estate (Brokers and Salesman) Act as "a work in progress", Mrs Wallace-Whitfield said it was "one of my goals" to see the process through to completion before her term as BREA president ends.

She added that she was working on the changes with past BREA president, Carla Sweeting, and other former presidents to ensure substantial seniority and experience went into the effort. Besides improving consumer protection, the current BREA chief indicated that the reforms will also seek to crack down on "rogue agents" and foreigners who enter this jurisdiction without co-broking with locals.

"It's been a long work in progress, but we should be there once we get it approved by the Attorney General [Carl Bethel]," Mrs Wallace-Whitfield told Tribune Business. "Once we are completed he has to review it and let us know everything is in order, proper wording and things like that. Once that is done, hopefully we can have our Act updated.

"It's all about continuing education, and beefing it up and making it a strong Act. The year 1996 was when I got married, and that's a long time ago. So many government laws have been put in place since then, like KYC compliance, VAT.

"Things have changed, laws have change, different laws have come into place. We want to make sure everybody is on the same page and our members are protected. With every change to the law we have to do our changes. We can make policies, but policy can be challenged. We have to make sure we have tightened up so that moving forward this law is strong and held by the country."

Mrs Wallace-Whitfield said one focus was ensuring all Bahamas-based real estate brokers and agents are properly licensed, adding: "It's all about protecting the Bahamian people, and making sure that when you do want to get involved in selling real estate you apply and do it properly.

"One of the things that's important to us is to let the public know it's critical to use a licensed BREA member. If something happens with your transaction or sale, and you contact BREA, we do try to help resolve the matter. But if they're a rogue real estate broker, and are not licensed by BREA, we have to contact the police.

"There are rogue people out there, and we have to protect our industry. We have to let the public know that if you use someone who is not licensed, we cannot protect you. There are a few out there, and this is actually another reason why we need to upgrade the Act. The language in the Act is kind of vague, and we want to tighten that up."

The BREA president said foreigners realtors selling Bahamian land or property without the involvement of a local counterpart was another area in the Act that required "black and white" language to remove the possibility of interpretation, but added: "We're making headway."

"I've travelled and had several meetings with the National Association of Realtors," Mrs Wallace-Whitfield said of her dealings with BREA's US counterpart. "We have a bilateral agreement with them, and they are on board with helping their members coming over here.

"They're ready to prosecute offenders, but we have to do our due diligence and get evidence. It's good to know they are on our side and have our backs if problems arise. Once the Act is tightened up hopefully that will eliminate some of the problems and kind of sift out people getting into real estate for the wrong reasons."

All that these unnecessary greedy realtors are seeking to do is legislatively protect their own pockets at their clients' great expense. You certainly don't need a realtor to list your property for sale today. Anyone can do that for themself on a number of websites. Just hire a reputable lawyer and do away with the outrageously costly realtor. Most good lawyers have infinitely more contacts than most realtors do and are much better positioned to assist you with the purchase or sale of any type of real property.

Yes! I did exactly that! Found a buyer who I knew liked my property, hired a reputable lawyer, saved $10’s of thousands of dollars.

The fact that the Commission rate is fixed at 6% and 10% is ridiculous. Every year real estates agents say Government should cut what it takes from the sale of land in order to spur growth in real estate sales, but they never talk about them receiving reduced commission. There is no incentive in this country to acquire a dilapidated house and do it up to sell as you will not be able to make a return on your investment with all the fees you are charged.

Another closed shop in the Bahamas that actually inhibits development. Notice how quick they are to say "Prosecution" and "having our back" while the words of "Innovation" and "development" are missing.