Haitian Man Jailed For Getting Fake Birth Certificate For Daughter 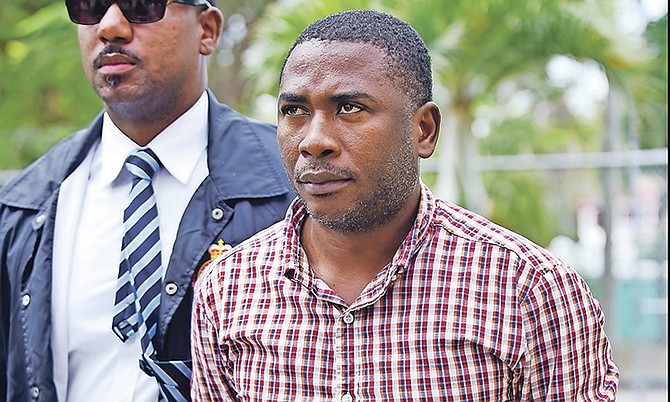 A Haitian man was sentenced to three years behind bars yesterday for getting a fake birth certificate and school acceptance letter in order to obtain legal papers for his daughter.

Jacsen Simeon avoided the maximum five-year penalty yesterday for swindling the government out of a certificate of identification in a bid to obtain a belonger’s permit for his daughter who was born in Haiti.

However, Senior Magistrate Derence Rolle-Davis ordered that Jacsen Simeon, who is on a valid work permit that expires on November 14, be deported as soon as he completes his prison sentence.

Simeon’s sentence came after he, via the assistance of translator Charlene Jean, pleaded guilty to 11 fraud-related offences stemming from his actions that date back to January 2014.

He admitted to uttering a fake birth certificate copy in his daughter’s name with plans to defraud the Passport Office on January 28, 2014, and being caught with that document on the same date.

Simeon also admitted to defrauding the Passport Office of a certificate of identification for his daughter on that same date.

The 42-year-old further admitted to uttering and being caught with a fake birth certificate copy in his daughter’s name, which, along with a fake Yellow Elder Primary School letter of acceptance he uttered, he tried to use to obtain a belonger’s permit for her on April 12, 2016.

According to the facts, on February 4, acting Registrar General E Sally-Ann Lockhart-Pratt contacted the Anti-Corruption Unit of the Royal Bahamas Police Force and reported that Simeon came to the department seeking to get a copy of a birth certificate in his daughter’s name.

As a result, checks were made of the department’s computer system which revealed that the photocopy Simeon possessed was legitimately issued in the name of Rashad Travis Wallace.

That information was immediately brought to Mrs Lockhart-Pratt’s attention, and it was eventually confirmed that the copy Simeon possessed was fake. Police action was requested, and Simeon was eventually arrested.

During the course of the investigation, several persons at the Registrar General’s Department were questioned in connection to the matter. Inquiries were also made at the Passport Office.

As a result, Acting Chief Passport Officer Siobhan Deane stated that in 2014, Jacsen used the fake birth certificate to obtain a certificate of identification from the department in his daughter’s name.

Further inquiries were also conducted at the Department of Immigration, whose Chief Immigration Officer Norman Bastian provided information that in 2016, Simeon used the fake birth certificate along with a fraudulent letter of attendance from the Yellow Elder Primary School to obtain a belonger’s permit for his daughter.

On February 6, while being interviewed by police, Simeon admitted to the offenses. He said he was assisted by a man name Herode Gedeon aka “Basle” and paid him $1,000 to get the fake documents.

Simeon also told officers that his daughter nor his wife, Ashmide Simeon, knew of the fake documents and that he acted alone.

Yesterday, in response to a question from the senior magistrate, Simeon said he committed the acts solely for his daughter’s benefit. “I wanted to help my child,” the man said.

He said he trusted that whatever Gedeon was doing was on the level, but eventually found out that was not so. When asked by the magistrate if he pointed Gedeon out to the police, Simeon said he had a contact for the man, but he died last year.

“I am ashamed for what took place,” Simeon said via Ms Jean. “He told me he was he was assisting me. I thought he was doing it the right way.”

The magistrate then asked if Simeon could read English at all, to which the man replied: “Yes, a little bit.” Thus, Magistrate Rolle-Davis said he should have known that the birth certificate said his daughter was born in the Bahamas, and not Haiti. And if so, Simeon knew it was forged, the senior magistrate reasoned. Magistrate Rolle-Davis ultimately sentenced Simeon to three years behind bars, asserting that he “knowingly” committed the various offenses. He further charged that Simeon’s actions were “calculated and planned”, and that it was only due to the “benefits of his deception” that he was able to stay under the radar for so long.

Thus, Magistrate Rolle-Davis said he was satisfied that Simeon should be punished in such a way so as to “deter others who may have the desire to defraud the government”.

They caught this guy, but literally 1000's more have gotten away with this type of fraud for decades.

Our country is in serious jeopardy!

Bahamian tieffing 1 lb bag of rice an can tuna costing $3.15 get sentencrd to da one year two months jail in 2017. Surely all this Haiti man deceiving plainly trying to swing this Magistrate an dealing with Bahamuan Birth rights they needin to throw him in Fox Hill an throw away the keys.

All methods costing billions of tax dollars in Marine Gun Boats, Aircraft, Drones, Marine Border Outposts, US Assistance Immigration, Police cost plenty dollars, an three years in jail for this Haiti man crookery is a joke compared to Bahamuan tief get year in jail for can tuna an bag rice costing $3.15

I'm more interested in what happened to the person who sold him the fake birth certificate. Are they still at work and if so , why?

The Bahamas better stop playing games with Haitians as Haiti is inundated with Chinese who invested heavily in Haiti's infrastructure.

When Coronavirus gets a foothold in Haiti, Haitian migrants will bring the virus to the Bahamas and the government will say "their illegal children must be allowed in schools".

Thank you PLP and FNM!!

There are people with outright intent brungs criminal harm to the colony - and then there is a comrade otherwise law abiding working daddy, who simply tried help his daughter - which at most under the law - should've brought no more than charge for committing a misdemeanor - with a modest fine - but sent be locked up 3 years up at Fox Hill Prison - then deported back other hell hole of Haiti - really?

Fair comment, regardless the degree guilt - the comrade daddy, was only out brungs some normality into life his daughter. But how is justice served by the jailing of a legally in colony's employed breadwinner - and put away from his family and workplace for 3 years? Yeah, no?

It is a sad commentary on the laws and mores of our country that this father was forced to break the law in order to try and get his daughter a chance to be educated and eventually get employed. The people who lack compassion and decency will probably be applauding this poor man being incarcerated with the murderers and rapists presently kept in the disgusting conditions of Fox hill Prison, although I understand it has a kinder gentler name now, same disgusting place though.

What nonsense! This is just another example of how entitled Haitians feel about Bahamas and whatever it can provide for their benefit. He wanted his daughter to have something she was not entitled to, so he decided to take it. His motive is the same as any other criminal therefore, his punishment should be the same.