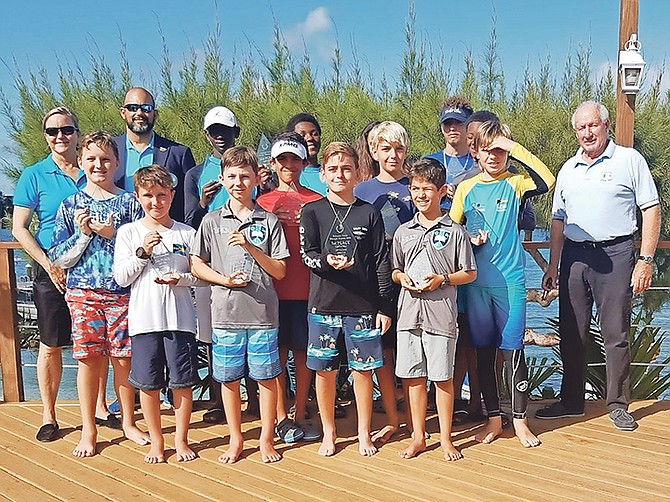 With 51 participants in all, results showed just how competitive our young sailors are in the region.

The Bahamas Youth Olympic Regatta is sponsored by the Bahamas Olympic Committee.

This is the first of four regattas which will serve as qualifiers for our Optimist Dinghy sailors to make Team Bahamas and represent the Bahamas at two upcoming international events - Optimist Worlds in Riva, Del Garda, Italy in July and Optimist North American Championships, in Cancun, Mexico in October.

Sailing conditions for the two-day, seven-race series varied with the first day being very light and tricky winds and the second day being near perfect 10 to 12 knot breeze out of the east.

The top three finishers for each fleet were:

“We spoke with a few of the sailors to get their view on this weekend’s regatta,” the organisers said. “Patrick Tomlinson, a nine-year-old sailing with the Lyford Cay Sailing Club, has been sailing for the past year and-a-half.

Patrick said that in preparation for this regatta, he worked on his boat speed and the light winds helped him to be able to beat out his sailing mates. He feels great about winning and loves sailing.

“Zane Munro who placed second said that he has been sailing for about a year and-a-half and he gained a lot of experience during the recent Optimist North American Championships, which were held in New Providence September 27 to October 4, 2019. He also feels that the light winds worked in his favour this weekend and is excited about his 2nd place.

Of particular note is that the junior sailing programme in the Bahamas is now made up of approximately 30 per cent girls, who are enjoying the sport and doing very well.

Morgan Grammatico, who presently sails in the Laser Radial fleet, won in her fleet this weekend. Morgan has been sailing for the past five years and says that sailing has given her many opportunities.

She said sailing gives her something to be passionate about and something to be proud of. She credits practicing and planning her races beforehand and looked to the winds and tides so she could use them to her advantage.

Maryetta Johnson presently sails in the Sunfish fleet and is benefitting from the programme through the government school initiative, which affords students from public schools, who can swim, to participate in the junior sailing programme.

Maryetta is also a certified coach, having successfully sailed in all of the fleets, and is doing very well in the sport of sailing.

A special thank you to the Bahamas Olympic Association for sponsoring this annual event and to Nassau Yacht Club with Bahamas National Sailing School for organising it.