‘Officer Beat My Son In Prison’ 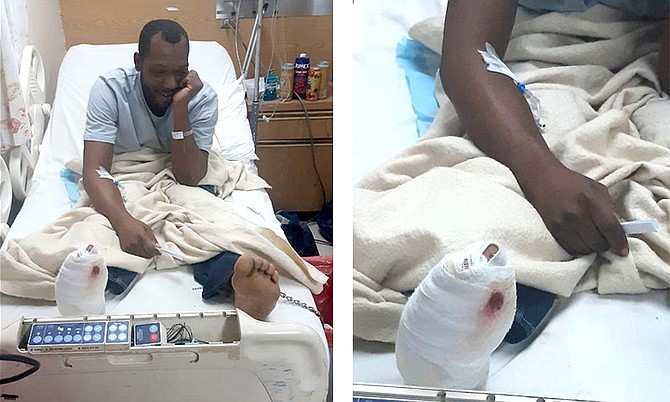 Jonathan Lightbourne in hospital with a damaged foot.

A MAN on remand for marijuana possession was beaten so badly by a prison officer that his leg required surgery, his mother alleged yesterday.

Ellen Kemp, 51, said she went to the Department of Correctional Services on Monday after she was told her son was seen in hospital with a damaged foot.

“When we went to see him, he came out hopping, handcuffed behind his back,” she said. “He said, ‘You see my foot mummy?’ His right leg was black and swollen, all his toes and everything.

She alleged: “He said he had an altercation with a juvenile in a cell who threw (urine) on him and an officer came in and slapped up the juvenile. My son speaks his mind so apparently the officer told another officer to open the cell so he could take my son out and deal with him.

“My son said they threw a bucket of water on him and the officer went in the cell and beat him while two other officers stood out watching. He said he was kicked and stamped and no one did anything. This happened from last week, Wednesday, and no one took him to the doctor until he had to go to remand court where they sent him over to medical and that’s how he got to the hospital. He had to go in surgery (on Tuesday) for his foot. They had to cut the skin from the bottom to drain it because it started to get gangrene.”

Ms Kemp said she reported the incident to the department’s internal affairs section on Tuesday, following which officials took statements from her son, Jonathan Lightbourne, at the hospital. Ms Kemp said when she went to visit her son at the hospital yesterday, guards allegedly told her that they received orders that he was not allowed to receive visitors anymore.

Lightbourne, 33, is on remand after allegedly being caught with joints of cannabis, Ms Kemp said. She said it is the second time he has been arrested for possession and he has been in prison on remand since January 9.

Ms Kemp insisted she does not support her son if he breaks the law, saying she purposely failed to sign off on his bail.

She said it’s especially upsetting he was allegedly beaten at a time when the government wants to decriminalise possession of small amounts of marijuana.

“It bothers me because that could’ve been my son life,” she said. “I don’t lie for my children, that’s why I didn’t sign for his bail and I didn’t go and see him (in prison). This is a minor crime and for this to happen when marijuana is something they trying to make legal is ridiculous.”

When contacted, Bahamas Department of Correctional Services Commissioner Charles Murphy said the matter will be looked into.

The matter will be looked into, ok we'll wait?? It sounds like the work of frustrated D average officers again.

This is the sort of thing where serious charges should be brought against the offending offices and other officers that stood and allowed the "CRIME" to take place.

This is a shame.

Yesterday, it was me. Today, it is you. Tomorrow, it will be you all.

These superficial juvenile one sided stories are beneath the dignity of any person who has the training to be an actual reporter!

True but there's one fact that can't be disputed he had surgery for a foot with gangrene. I'm assuming that he would have complained to someone before it got out of control. So "something" didnt go right.

Too many of these guys have to get emergency medical attention and the officers/guards charged with oversight never know nothing.

... any story that only presents one side of an issue, without even making a serious effort to confirm the truth of the statements, is always suspect in my mind. That is what you expect from a post on social media, NOT a 'reputable' newspaper.

Be sure your relatives compile 100 pages of documents and photo evidence before they ever complain of police brutality on your behalf. Call them ans tell them now so they will be prepared to be unprepared.